New South Wales is renowned for having some of the best universities in the country and is the most popular Australian destination for international students. Whether you’re thinking of undertaking an undergraduate bachelor’s degree or looking to pursue post-grad qualifications, you’re spoilt for choice in NSW when selecting the university that’s best for your career prospects, student support needs and campus culture preferences.

These factors are common drivers of university choice; 64% of students surveyed by Canstar Blue said their university degree was vital for their future career prospects, while 51% said university was the best time of their life from a social perspective. It’s clear that where you choose to study matters.

That’s why Canstar Blue surveyed more than 500 current students and graduates of the past 10 years to find which universities they rated the best in NSW. There are many university ratings out there, but we wanted to take a different approach by asking students to rate their university on a range of factors that were important to them, including how satisfied they were overall with their experience.

So, which are the highest-rated universities in New South Wales for student satisfaction?

Which NSW universities were included in our 2021 ratings?

Here are the universities in NSW that were included in Canstar Blue’s 2021 student satisfaction survey, listed below in alphabetical order. 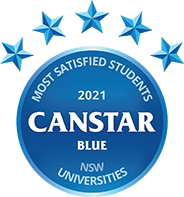 What is the University of New England known for?

The University of New England is predominantly an online university. It was the first Australian university established outside a state capital city. It’s also the longest continual provider of distance education (since the 1950s) and Australia’s top online university, according to Online Study Australia. UNE has a large network of campuses, with multiple metro and regional locations and offers undergraduate and postgraduate degrees in dozens of disciplines including business and finance, law, social and health sciences, engineering and more. There are also bespoke courses available for students who want to pick and choose their qualifications.

The University of New England is consistently recognised as one of the best universities in Australia for postgraduate student satisfaction, as measured by the Student Experience Survey (SES), which is conducted every year by Quality Indicators for Learning and Teaching (QILT) for the Australian Government Department of Education, Skills and Employment. It was also top-ranked for its student support, postgraduate teaching quality and overall student experience by the Good Universities Guide.

Does the University of New England offer online learning?

The University of New England is Australia’s second-largest online university and Australia’s top online university, according to Online Study Australia. It has a comprehensive online learning program for undergraduate and postgraduate studies, and its online offering is rated among the best in arts, business, education and science. Online courses are available across 14 study areas, including IT and data science, education and training, psychology and mental health, environmental science and law and criminology. There are also research degrees and pathway-to-university programs available online. Most students at UNE choose to study online across three study periods with 24/7 tutor support available. 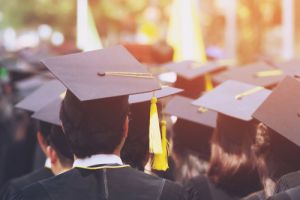 Interested in finding out how students rated other top universities from around Australia? Click on the links below to read more about the top-rated universities in the country.

How many universities are there in NSW?

There are 11 universities in New South Wales, most of which are based in Sydney and several of which have appeared in world university rankings such as the QS World University Rankings and the Academic Ranking of World Universities (ARWU). Most of these universities also have regional study centres. NSW also has several tertiary education providers such as Technical and Further Education (TAFE), the Academy of Information Technology, JMC Academy and other vocational education and training providers.

Is the University of NSW better than Sydney University?

What is the best-rated university in Sydney?

Our university ratings saw the University of New England place number one for overall student satisfaction. The University of Wollongong, which also has campuses in Sydney, and USyd were rated second and third respectively.

There are other prestigious institutions in Sydney and NSW worth considering for your studies, however, so be sure to check out other university rankings for guidance on which rank well for education excellence, graduate outcomes and student experience. Some rankings worth investigating include the QS World University Rankings, the ARWU and The Times Higher Education World University Rankings.