The best-rated universities in Western Australia

Western Australia may be an export powerhouse but its capital Perth is also a vibrant place to live, work and study – as the closest major Australian capital city to Asia – a unique international study destination. That’s why WA universities have a strong international appeal, as well as offering urban sophistication and research innovation – all of which places many of them at the top of various global rankings for student experience.

This can make choosing the right university hard, and since more than half of students surveyed by Canstar Blue said their university degree was vital for their future career prospects (64%) and 51% admitting university was the best time of their life from a social perspective, making the right choice is important.

That’s why Canstar Blue surveyed more than 160 current students and graduates of the past 10 years to find which universities they rated the best in Western Australia. There are many university ratings out there, but we wanted to take a different approach by asking students to rate their university on a range of factors that were important to them, including how satisfied they were overall with their experience.

So, which are the highest-rated universities in WA for student satisfaction?

Which WA universities were included in our 2021 ratings?

Here are the universities in WA that were included in Canstar Blue’s 2021 student satisfaction survey, listed below in alphabetical order. 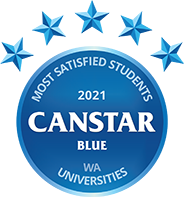 Edith Cowan University (ECU), which has campuses in Perth and Bunbury in WA, rated five stars in the categories of quality of education, teaching staff, student support, career opportunities and prospects after graduation, campus amenities and social aspects.

What is Curtin University known for?

As well as its base in Perth, Curtin University, which was named after former prime minister John Curtin, has campuses in Malaysia, Singapore, Dubai and Mauritius. The university leads major national and international research projects in data analytics, minerals and energy, agriculture, sustainable development, health sciences and astronomy. Curtin University is also a member of the Massive Open Online Course (MOOC) provider edX, founded by Harvard University and MIT, allows people from anywhere in the world to study Curtin short courses online at no cost.

Curtin University has placed in the top 1% of universities globally in the Academic Ranking of World Universities (ARWU). It was also rated Western Australia’s top public university for graduate employment outcomes in the Graduate Outcomes Survey by Quality Indicators for Learning and Teaching (QILT).

Curtin University offers several courses that can be studied either partly or fully online. Students can check out the Curtin Online website to find the list of fully online undergraduate and postgraduate programs available and apply directly. Some Curtin courses are also available to study through Open Universities Australia (OUA), plus Curtin  currently offers more than 100 free MOOCs. Studying online with Curtin University is ideal for students who live regionally, interstate or overseas, or who can’t attend classes on campus. 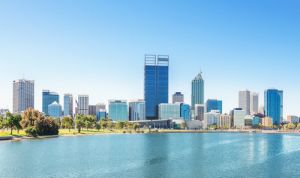 How many universities are there in Western Australia?

There are five universities in Western Australia, all of which have campuses in Perth and some also have regional centres. Four of these institutions – Curtin University, ECU, University of Western Australia (UWA) and Murdoch University – have appeared in world university rankings such as the QS World University Rankings and the ARWU. Western Australia has other tertiary education providers such as Technical and Further Education (TAFE), the Engineering Institute of Technology and other vocational education and training providers.

Is Curtin University better than the University of Western Australia?

The UWA and Curtin University are both public research universities and ranked highly for their quality of education, innovation and graduate employment outcomes. UWA is best known for its courses and degrees in social and agricultural sciences, psychology, education and earth and marine sciences. It has featured in the top 100 universities in the ARWU, which is also known as the Shanghai Ranking, and in the QS World University Rankings.

Curtin University, meanwhile, is recognised for its strengths in teaching and research innovation, especially in the fields of mineral and mining engineering, health, science and hospitality and tourism management. It has been ranked as one of the best Australian universities for teaching quality, overall experience, learning resources and staff qualifications by the Good Universities Guide. QILT’s Graduate Outcomes Survey also showed Curtin graduates receive the highest median salary of WA university graduates.

What is the best-rated university in Western Australia? 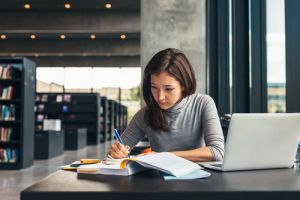 Are you a current or aspiring university student and concerned about how much your phone plan costs per month? Canstar Blue has a collection of the best deals on student phone plans in Australia so you can find out if you can save more of those precious dollars each month.