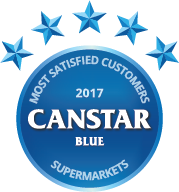 After three years at the top, ALDI has been replaced at the top of our supermarket ratings by Foodland. The South Australian supermarket chain earned five-star reviews for its customer service, store layout, food freshness, product variety and overall satisfaction in 2017.

When it comes to supermarkets, all you ever hear about is the so called ‘price war’ between the big three – Coles, Woolworths and ALDI – with price reductions on anything from fruit to meat often deemed worthy of the evening news. But in South Australia at least, another supermarket chain is making its presence felt, to the extent that it has now dethroned ALDI at the top of our national customer satisfaction ratings. We’re talking, of course, about Foodland.

Foodland replaces ALDI after three years of dominance at the top of our customer satisfaction ratings, earning five-star reviews from happy shoppers on store layout, customer service, food freshness, product variety and overall satisfaction. It was rated four stars for the quality of its private label products, special deals and value for money.

Australians spend an average of $136 a week at the supermarket, the survey found.

While price is naturally very important to shoppers, other factors also play a part in determining customer satisfaction. The research identified drivers of satisfaction as being:

Some supermarkets are known for low prices, while others are known for quality products. But the reality is that supermarkets need to hit all the right notes to keep their customers happy. It appears that Foodland has managed to strike the right balance between all of the factors listed above. We all want to save money, but we also want an enjoyable shopping experience.

Of the 28% of shoppers who have started using a different supermarket in the last year, saving money was the most common reason given. However, various other factors are also at play:

Of the shoppers who have not switched supermarkets in the last year, convenience is the main reason behind their loyalty.

Reasons for using the same supermarket:

Whether you’ve switched supermarkets or not, chances are there are some things about your supermarket that bother you. We asked shoppers about their supermarket pet peeves – and there were a couple of standout ones:

Other less common complaints related to things like not being able to find a customer service assistant, unfriendly staff and store opening times.

The moral of the story is – like with any product or service – you should always shop around if you’re not totally satisfied with what you’re getting. With that in mind, here is an overview of the five supermarkets that featured in this year’s review. It’s also worth considering that there are many other, smaller supermarkets out there that could be worth a look.

The South Australian chain stays true to its local values, with all Foodland branded products made in Australia, with over half of them made in SA itself. That means zero imported goods in the Foodland private label range. Outside of its stores, the company works to be an active part of South Australian communities by supporting local charities, schools and sporting clubs. Each Foodland store is independently owned and locally-focused – so you get all the advantages of a large chain with the community focus of your old-fashioned local business. Apart from the more than 100 Foodland stores in South Australia, you’ll also find one in Jabiru (Northern Territory) and Broken Hill (New South Wales). Foodland clearly has an avid fan base – as well as taking out top place for overall satisfaction, Foodland has picked up five stars for customer service, store layout, product variety and food freshness.

German giant and supermarket disrupter ALDI has lost top spot in our supermarket ratings for only the second time since 2011. While ALDI doesn’t yet have the same numbers of Coles and Woolworths, it’s fighting back against the duopoly with often lower prices, with its own brands offering real competition against major brands stocked by other supermarkets. ALDI also offers something different with its ‘Special Buys’, one-off or seasonal products ranging from specialty foods to snow gear to luxury skin cream. This year, ALDI was the only supermarket to rate five stars on value for money, special deals available, and quality of private label products. While it hasn’t topped our ratings this year, ALDI may still be your supermarket of choice if price is your key metric.

The Independent Grocers of Australia works by utilising group purchasing and marketing, while store management and ownership stays independent. More and more solo shops are joining the IGA name, which currently has over 1,400 locations right across Australia, from small corner shops to sprawling supermarkets. IGAs tend to open earlier and close later than regular grocery stores, which can make them the perfect go-to for night owls. Many shops also carry more local brands, specialty products, or imports for some different variety from your usual supermarket stock. IGA has performed reasonably well in this year’s supermarket ratings, with four stars for overall satisfaction, as well as service, store layout, product variety and food freshness. IGA fell down on value and specials, which is perhaps little surprise given the company has a reputation for slightly higher prices – one it seems to be working to change, however.

One of Australia’s two biggest supermarket chains, Coles is owned by Wesfarmers, along with Bunnings Warehouse, Officeworks, Kmart, Target, and many more businesses. Coles currently has over 800 locations across Australia, plus online shopping with a choice of ‘Click & Collect’ locker pickup or home delivery. The two biggest supermarkets, Coles and Woolworths, account for about 80% of Australia’s total supermarket business, showing that they’ve solidly cemented themselves as Australia’s primary grocery shopping destinations. That being said, our ratings show there’s plenty of room for improvement – Coles rated three stars in all categories except product variety, where it picked up four stars.

Fondly referred to as ‘Woolies’, there are more than 1,000 Woolworths stores across Australia. Parent company, Woolworths Limited, also owns Dan Murphy’s and Big W, plus several other businesses including a number of hotels and pubs. Woolworths also operates in New Zealand, where it’s the second largest supermarket chain under the name of ‘Countdown’. Woolworths as we know it in Australia also offers online shopping – with either ‘Click & Collect’ pickup or home delivery – which has made shopping a little easier for the time-poor or transport-limited. As with Coles, our ratings suggest that the massive market share doesn’t necessarily translate to customer satisfaction, as Woolies rated four stars on product variety, but three stars across all other categories.

Canstar Blue commissioned Colmar Brunton to survey 3,000 Australian adults across a range of categories to measure and track customer satisfaction. The outcomes reported are the results from customers within the survey group who have visited and made a purchase from a physical supermarket in the last month – in this case, 2,931 people.