I think we can all agree that we need comedy now more than ever. The world is falling apart and if I don’t laugh, I’ll cry. But if you’re anything like us, you’ve probably already made your way through every movie under the ‘comedy’ banner on Netflix. Therefore, it’s officially time to move up in the world of comedy – to stand-up. You may not know it, but Netflix Australia currently has a massive range of stand-up comedy specials from comics from all over the world. Whether you’re a fan of James Acaster’s bizarre English comedy, Hannah Gadsby’s iconic Tasmanian drawl, or Jack Whitehall’s British take, there’s something for everyone. 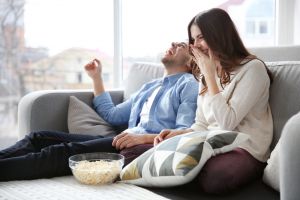 Below are, in this author’s opinion, some of the best stand-up comedy Netflix Australia has to offer. Seriously – we dare you not to laugh. (PSA: If you make your way through all of these, make sure you check out our list of the best Netflix movies and television shows).

Jimmy Carr has been in the stand-up game for a long time. Despite his numerous appearances on television shows like QI, the 8 out of 10 Cats franchise, Big Fat Quiz of the Year and The Fix, he remains most at home on the stage and the spotlight is his best friend. In this one-hour set, Carr reminds us all why he is the king of caustic wit as he cruises through the best jokes of his career. Good comedy is about class, dignity, timing and Carr letting loose on stage.

John Mulaney you lanky genius! Just when you thought you couldn’t love Mulaney anymore, he goes right ahead and drops this masterpiece. On the other hand, if you haven’t yet been blessed with Mulaney’s work, then this is the perfect place to start. From start to finish the show is a winner, but very special awards go out to the ‘horse in a hospital’ joke, it doesn’t get any less funny even though Trump is no longer president.

Taylor Tomlinson is “too old to party, too young to settle down”. She’s only 25 – but she’s one of many people who want their 20s to be over. In her first Netflix special, Tomlinson pokes fun at herself for basically an hour – and highlights include her on-again, off-again boyfriend (her “lesson that I can’t seem to learn”) and her strict Christian upbringing (she started performing stand-up in church basements). Quarter Life Crisis has turned the young American into a breakout star, and for good reason. This isn’t the last we will be seeing of her.

You may recognise Davies as Principal Gilbert from The Inbetweeners, or his starring role in Man Down. Davies was a teacher before he started stand up, and as a result has some of the best stories you could possibly ask for (personal favourite is when he spent an entire bus journey to Paris trying to make someone say the word ‘vegetable’). You Magnificent Beast dives into manscaping as a middle-aged man, blind dates, the way he treated his homemade teddy bear, and Welsh music. Davies is a master in comedy, and will have you in stitches.

Ali Wong only does stand-up specials while she’s pregnant, and we love her for it. Wong’s Hard Knock Wife is her second special (her first, Baby Cobra, shot her to international fame) and she uses her pregnancy to make people laugh, but more importantly make them stop and think about the double standards of parenting and being the breadwinner. Joan Rivers would be proud.

This is, arguably, one of the most talked about stand-up specials of recent years. Aussie comic Hannah Gadsby was already known in Australia for her comedy as well as her role as Hannah on Please Like Me. However, it was Nanette that shot her to international fame – the special that challenged the way we think about comedy and took us on an emotional journey of her life growing up queer in rural Tasmania. The special received 100% on Rotten Tomatoes from 46 critics. A must-watch.

This is quite possibly, the most British thing you will ever watch. James Acaster is an absolute freak, and we are loving every second of it. Repertoire is a four-part series (“Recognise,” “Represent,” “Reset,” and “Recap”) that can easily be watched in the one sitting. He’s the only person that could talk for 16 minutes about bananas and act as an undercover cop for the entire set and get away with it.

He’s known worldwide as one of the most chaotic comedians (his semi-scripted Netflix show Travels with My Father made sure of that) and At Large also doesn’t disappoint. Whitehall and his OTT personality oozes confidence – he runs around so much he needs a microphone attached to his mouth – and it makes for an entertaining hour. He talks all things drugs, alcohol, meeting the royals and competing with his greatest rival, Robert Pattinson.

Jenny Slate must be protected at all costs. You may know her from her incredibly successful movie and television career, or her stint on SNL (which she said left her with literal stage fright), but from now on I only want to know her from Stage Fright. Instead of performing loud and boisterous, she is quiet, but refreshingly unique and funny. The special is bizarrely centred around the joys of getting dressed, but it works – Stage Fright is continually referred to as a comedic ode to fashion.

With plenty to give you tears of laughter instead of tears of sadness, treat yourself to some comedy specials to lift the mood.