The greatest detective in the world is about to meet his match. No, it’s not Moriarty (although he did come close). It’s his teenage sister, Enola Holmes – the breakout star of Netflix’s new-gen Sherlock movie, Enola Holmes. The game is officially afoot on September 23.

What is Enola Holmes? 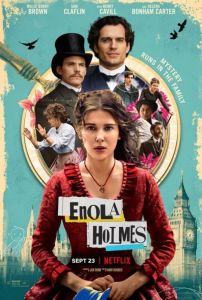 It’s still 18th century England, but it’s a whole new generation of Sherlock. Based on the beloved book series by Nancy Springer, Enola Holmes follows the life of Sherlock’s younger, free-spirited sister Enola (‘alone’ spelt backwards) who is portrayed by none other than the Netflix Queen herself, Millie Bobby Brown (Stranger Things).

Directed by Harry Bradbeer, who also directed the Emmy-award winning British shows Fleabag and Killing Eve, the mystery-adventure kicks off after Enola discovers her mother (the Helena Bonham Carter) has disappeared. Finding herself in the care of her two (very familiar) older brothers – Sherlock (The Witcher’s Henry Cavill) and Mycroft (The Hunger Games’ Sam Claflin) – who are set on turning her into a ‘proper lady’, Enola flees to London to escape and in search of her mother. However, in true Sherlock fashion, the youngest Holmes finds herself drawn towards danger, mystery and answers.

According to Netflix: “When [Enola’s] journey finds her entangled in a mystery surrounding a young runaway Lord (Louis Partridge), Enola becomes a super-sleuth in her own right, outwitting her famous brother as she unravels a conspiracy that threatens to set back the course of history.”

Is there a trailer for Enola Holmes?

We’re in luck, because a trailer has just dropped for Enola Holmes, granting us a glimpse into the Sherlock Holmes universe like you’ve never seen before (there’s even some brilliant Fleabag-esque fourth wall breaking from Brown). Check it out below and help solve the mystery when Enola Holmes drops on Netflix, September 23.