It’s 2018. It’s the year of the rom-com resurgence and Netflix is looking for its next big hit. Introducing – three relatively unknown actors (including the now-beloved Aussie Jacob Elordi), a classic high-school friendship/love triangle between Joey King and two attractive brothers, and the perfect timing – aka, The Kissing Booth.

Released straight to the streaming site, the movie was an instant (and surprise) hit, making stars of the three leads, and even becoming one of the most re-watched Netflix films of the year. And now, after two years of wondering if we’ll ever hear from Elle Evans, Noah Flynn and Lee Flynn again, we have answers: the highly anticipated sequel, The Kissing Booth 2, is set to hit Netflix screens on July 24. 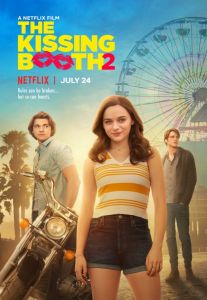 What is the Kissing Booth?

The first movie, based off the novel of the same by Beth Reekles, follows high-school junior and never-been-kissed late bloomer Elle Evans (played by King). Born on the same day at the hospital, Ella and Lee Flynn (Joel Courtney) have been best friends since day one (literally). To keep their friendship indestructible, the pair create a set of rules – and #9 is that relatives are totally off limits, especially Lee’s older bad-boy brother Noah (Jacob Elordi).

But when Elle and Lee host a kissing booth at their school’s Spring Carnival, a chance encounter finds Elle locking lips with her secret crush – Noah Flynn himself. The two quickly strike up a secret relationship, unbeknown to everyone, from the Flynn’s mother (played by Molly Ringwald) to Lee himself. Elle has to make a decision: love or friendship?

What do we know about The Kissing Booth 2?

After Joey King and Jacob Elordi broke up IRL, the main question on everyone’s lips was if Elordi would return, but our prayers have been answered – all previous cast members will be returning to reprise their roles, plus some fresh faces.

At the end of the first movie (spoilers ahead) we see Joey tearfully wave Noah off at the airport as he embarks for Harvard University. Yes, Harvard (what, like it’s hard?). After a summer of romance with the hottest boy in California, Elle is forced back to school for senior year. Luckily, she’s finally patched things up with Lee, but we doubt that will be the end of her troubles.

Noah meets a seemingly perfect ‘friend’ at Harvard (newcomer Maisie Richardson-Sellers) and Elle is torn between trusting Noah or exploring things with a new classmate of her own, Marco (played by Taylor Zakhar Perez).

Is there a trailer for The Kissing Booth 2 yet?

The wait is over, and yes, there is finally a trailer. Fresh off the press, we see plenty of drama, potential heartbreak and high school shenanigans, meaning we’re in for a good time on July 24 when The Kissing Booth 2 hits Netflix. How good.