It’s been a while since the second season of Big Little Lies hit our screens in Oz, and we’ve all been missing our dose of Reese Witherspoon. Luckily, she’s back and better than ever, starring alongside Kerry Washington in a new series called Little Fires Everywhere. Released on Hulu earlier this month in the US, it’s our turn to binge the thriller as it finds an Aussie home and hits Amazon Prime Video on May 22.

What is Little Fires Everywhere about? 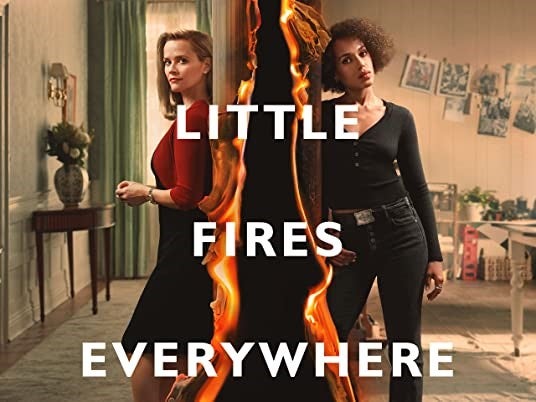 Based on the best-selling book of the same name from Celeste Ng, Little Fires Everywhere is set in the 90s and follows Elena, a rich, suburban mother and wife (played by Witherspoon, because she plays these parts so goddamn well). After noticing town newcomer and artist Mia (Scandal’s Kerry Washington) living in her car with her teenage daughter Pearl (Lexi Underwood), Elena offers Mia a job as their family maid, in turn giving the family a place to crash.

As the two polar opposite women begin to get to know each other, they clash and set off a chain of events that result in Elena’s lavish home being burnt to the ground. Think Scandal x Pretty Liars x Big Little Lies – oh, and Dawson’s Creek, purely because the beloved Pacey (Joshua Jackson) is starring alongside Witherspoon as her husband.

What can the trailer tell us?

There’s little (verbal) fires building all throughout the trailer, with some pretty clear socioeconomic and white privilege tensions bubbling throughout. Opening scenes reveal Elena’s gorgeous suburban house looking a little worse for wear – and according to the police officer at the scene, someone has lit the fire knowingly with Elena inside. Witherspoon says “I always had the best intentions” – hinting that maybe the newcomers had a little something to do with this.

At this point, we don’t really know whose side to back in this ‘Mia vs Elena’ (and let’s be real, we probably won’t until the final episode), but the trailer does some real numbers on Mia’s likability, especially the heart-to-heart between Pearl and Elena, whereby Pearl reveals her mother is “hiding secrets”. It also hints a budding romance between Mia’s daughter Pearl and Elena’s son Trip (newcomer Jordan Elsass) which basically everyone besides the two of them seem pleased about.

So, who started the fire? (or the little fires, everywhere, for that matter)? Only time will tell. Stream Little Fires Everywhere on Amazon Prime Video on May 22 to find out.