While the diesel engine may seem well and truly in the realm of tradies, farmers and truck drivers, it has proven a popular option for many others. With car manufacturers offering diesel engines on SUVs and 4WDs, as well as sports models, city motorists are now also using it to fill up. But for those venturing into the diesel market for the first time, there seems to be plenty to consider under the hood.

With multiple European countries aiming to cut back or completely do away with diesel cars by 2030, many diesel manufacturers are aiming to align with the tougher emissions regulations and guidelines to remain competitive, with a number of vehicles now using a fluid called Adblue Diesel Additive – simply referred to as Adblue – to help counter diesel emissions. But what exactly is Adblue, and how does it work? In this Canstar Blue article, we’ll detail what it is and whether or not it’s something that you need to be aware of the next time you get behind the wheel.

What’s the difference between diesel and petrol engines?

Before we dive into what Adblue is, it wouldn’t hurt to look at diesel engines as a whole, particularly if you’ve only been in the driver’s seat of a petrol model before. Petrol and diesel engines work in a similar manner, in that they both use internal combustion to convert fuel into energy to power the engine, and in turn, your vehicle. The engine converts fuel into energy through a series of small ‘explosions’, which are otherwise known as combustions. The main difference between petrol and diesel come from these combustions.

In a petrol engine, the fuel is mixed with air, compressed by pistons, and ignited by spark plugs. In a diesel engine, however, the air is compressed first, with the fuel then injected. As air heats up when it’s compressed, the added fuel is ignited, replacing the need for a spark plug. Diesel engines also have a higher compression ratio, making it more efficient, and generally allow you to go further on a full tank. 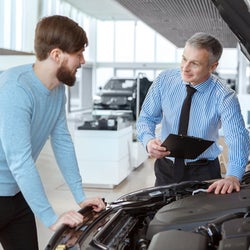 What makes an engine better than another can come down to a lot of different factors, including air intake, how many moving parts it has to power everything, as well as the manufacturer processes. But what about fuel type?

Petrol engines are thought of as something more closely related to speed, with higher revs more achievable, whereas diesel engines are thought of as more powerful, able to take you up a steep hill with ease, even if you’re towing something. Think of it as comparing a race horse to a draught horse. Both are highly capable at getting the job done, but ultimately it will come down to personal preferences when it comes to what’s under your hood.

Adblue, otherwise known as diesel exhaust fluid, is a consumable for diesel engine vehicles, and is used to break down any unburnt fuel or engine soot into water and nitrogen, which is also referred to as Selective Catalytic Reduction (SCR). While not essential when it comes to making the engine run, Adblue is essential in helping vehicles and manufacturers meet emissions guidelines and regulations, meaning that if you’re low on Adblue, your car isn’t as environmentally friendly as it should be.

Made from di-ionised water and urea, Adblue is stored in a separate tank and sprayed into the exhaust stream to break down the harmful gases left over from the engine combustions, before being sent through the exhaust system.

Do I need to top up my Adblue tank?

Adblue is one of the areas that your mechanic will check when you take your vehicle in for a service, meaning that if you keep up to date with all of your services, you likely won’t have to ever go near your Adblue tank.

However, if you’ve left it too long between services, then you’ll likely be reminded by your car’s onboard monitoring system, letting you know when the Adblue tank is running dry. While it will depend on the type of vehicle you drive, how you drive and other mechanical factors, as a general rule of thumb, you’ll burn through 1.5L of Adblue per 1,000km, so you aren’t alone if you’ve never refilled Adblue yourself.

Thankfully, topping up Adblue is like refilling any other liquid in your car, although you may have to be careful when doing so. While not toxic, Adblue can be corrosive on certain parts of the car, and you should therefore avoid getting any on yourself.

What happens if I accidently put Adblue in the fuel tank?

Where can I buy Adblue?

If you’re looking to top up, Adblue is available at most petrol stations at the bowser, as well as from retailers such as Supercheap Auto, Repco and Autobarn, and is generally available in either 1L or 10L containers.

Like with most other car fluids, Adblue containers should be stored in a shaded area, free of any potential contaminations to ensure that it works properly the next time you fill up. Storage life is generally between 12-18 months, depending on the climate and temperature of the storage area.

While it may not seem like an essential part of engine operation, Adblue is in fact one of the many backseat processes that keep the wheels turning, meaning it wouldn’t hurt to know a bit more about it if you’re looking to buy a new diesel car. If you are interested in purchasing a new car, head on over to our New Car Ratings, or visit our Top Selling Cars page to see what’s popular with Aussie motorists.