Like any business, energy companies have a number of costs and overheads to cover. In this case, retailers incur some costs when providing electricity to their customers, which will then be passed down to you. Knowing about these expenses can help you make better informed decisions about which provider you choose to supply your power.

The majority of the electricity bill you receive every month or quarter is broken down into usage charges and supply charges, with each priced through separate methodology. These figures can seem mysterious, but they don’t have to be. With a proper understanding of how your retailer arrived at the final figure for your bill, you could be left more empowered to choose a better retailer.

How do electricity providers determine their rates?

There are two main factors you need to look at on your electricity bill to gauge how retailers charge for electricity. They sound confusing, but we’ve broken them down for you!

How are usage charges set?

The electricity retailers purchase electricity from the National Energy Market (NEM) and simply resell it to their consumers. The NEM is the wholesale market from which electricity is purchased by the retailers (except in Western Australia and the Northern Territory). The wholesale rates are largely determined by supply and demand, but are regulated by government and industry regulators.

The wholesale rate of electricity is set every five minutes, meaning prices will shift as demand increases (i.e. during peak evening periods or when we’re all watching the footy). There are several steps before your energy retailer arrives at their price of electricity. They are:

From 1 July, 2019, a fairer default pricing was introduced which acts as a reference price from which all energy plans are compared. In NSW, QLD and SA, it is known as the Default Market Offer (DMO), while in Victoria, it is referred to as the Victorian Default Offer (VDO). This means that all energy retailers must now clearly outline their plans with an annual price based on the general usage in each state.

Electricity retailer expenses make up for a small portion of the final price charged to your property, but remember, your retailer is responsible for negotiating and bidding on wholesale supply rates in the first place, which dramatically affect the tariff rate you are charged.

How are supply charges set?

A supply charge – previously known as a service charge, fixed charge or property charge – is a fixed rate charge applied for each day you remain connected to the network, rather than the amount of electricity you actually use. These network charges cover operational and maintenance costs, as well as a return on capital for the distributor. Different areas are managed by different distributors, so your costs can considerably vary from network to network.

Origin Energy says the typical NSW electricity bill is comprised of 24 per cent NEM costs, 55 per cent network costs (including supply charges), 15 per cent from retail services (i.e. their costs) and 6 per cent from government schemes. This breakdown will of course vary on your retailer and the market structure of your state. In a regulated market, you can expect the retail services portion of your electricity rate to be lower at around 10 per cent. 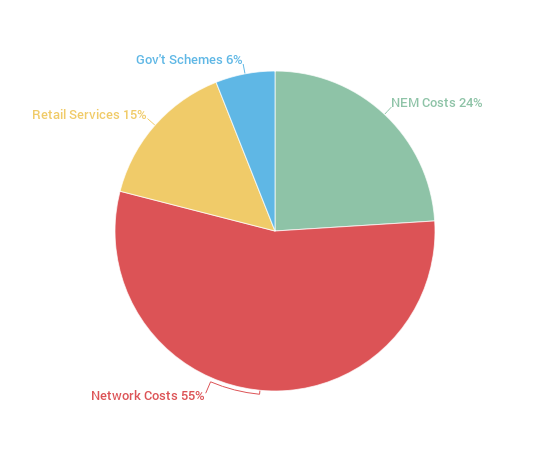 Competition in the electricity sector means energy retailers are competing to get the cheapest wholesale rates, while trying to minimise the company’s retail expenses. Recent rate rises in some areas have been largely attributed to increased infrastructure spending by networks, forcing up supply charges.

What does this mean for me?

The most common knee-jerk reaction to price deregulation is that prices are either going to skyrocket, or plummet. Deregulated electricity supply was meant to make providers more competitive, but so far electricity bills have gone up for some people and this is due to increased ‘infrastructure’ costs. But It’s not a black and white case, and these usage and supply charges have a lot to do with it – particularly supply charges, arguably the sneakier of the two.

The supply charge is charged for even having the privilege of being connected to the grid, often charged to cover apparent infrastructure costs. This is similar to catching a taxi whereby you are charged a base fare even if you don’t go anywhere! It’s important to shop around and try to decipher what the supply charges are for your energy retailer.

So, if you’re suffering from bill shock this quarter, there are ways to reduce your energy consumption and your usage charges. Ways energy retailers charge you for being connected to them can be difficult to get your head around, but we hope that this information is at least a good starting point for your own research. The most important underlying message is to research your retailer and to shop around the market.

Carbon neutral energy: What is it and who offers it?