Michael Schur, dynamite creator of shows such as The Office, Parks and Rec, Brooklyn Nine-Nine and The Good Place, has launched a new television series. The new show, called Rutherford Falls, will deliver the same cosy familiarity of funny characters and small-town vibes as Schur’s other creations, but with a fresh addition of indigenous voices and a slightly more sardonic story line. The show boasts a majority of Native American writers, which lends legitimacy to the storyline and a far more interesting (and realistic) take on what could have been a tired story. If you’re keen to catch Rutherford Falls, read on to find out how to watch it in Australia. 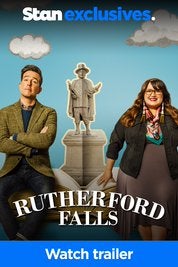 Where to watch Rutherford Falls

Rutherford Falls will be available to stream solely on Stan, with the show premiering on April 23, 2021.

Stan will be the sole host of Rutherford Falls in Australia, with the series premiering on April 23, 2021. There is currently no word on how many episodes the first season will contain.

What is Rutherford Falls about?

Ed Helms (The Hangover) stars as Nathan Rutherford, an enthusiastic local of the town Rutherford Falls. Nathan is fiercely proud of his town’s heritage, including his ancestor and founder Lawrence Rutherford, so much so that he dedicates his career to running a museum celebrating the town’s history. His best friend, Reagan Wells (Jana Schmeiding) also runs a museum, a one room museum on Native American history off the side of the town’s casino, owned by Native American cultural leader Terry Tarbell. When Nathan hears a statue of his beloved Lawrence Rutherford is set to be moved, it sets in motion a series of events which set Regan and Nathan on a journey of discovery and historical reckoning.