Looking for a binge? Look no further than one of the newest additions to the Aussie streaming market, BINGE. The brainchild of Foxtel with the affordability of Netflix and Stan, BINGE’s tagline is content so good that it’s ‘unturnoffable’ and we’re beginning to see why, with a massive range of our favourite shows from Foxtel, American cables such as HBO, as well as the BBC.

So, if you’re looking to settle in for a binge with BINGE, you’ve come to right place, with Canstar Blue looking at the top picks for shows available on the new streaming service. 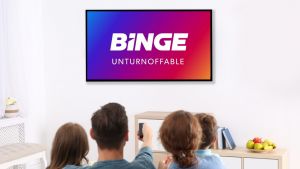 Below are, in this author’s opinion, the top shows currently streaming on BINGE, with more no doubt set to come to a screen near you. The top shows on BINGE include:

British crime shows get plenty of spotlight (as you can’t throw a stick without hitting one), but this time, it’s New Zealand’s time, with The Brokenwood Mysteries aiming to solve sleepy-town crimes. Grizzled veteran Shepherd is sent to Brokenwood to investigate strange goings-on, and decides he likes the quiet life. However, after his arrival, the sleepy little town becomes anything but quiet, giving him plenty to solve.

If you’re a fan of cooking, chances are you’ve heard of Julia Child and her show ‘The French Chef’, which was a pioneer of midday cooking shows. Julia follows her rise to the top, and the struggles she had to face to get her dream off the ground, and shines a light on a pioneer of the culinary world.

John Cena in jorts may be comical, but John Cena in superhero tights is legitimately comical, with Peacemaker starring the wrestler-turned-actor as the title character. Based on the DC comics of the same name, Peacemaker follows Cena’s superhero/anti-hero as he joins the black-op ‘Project Butterfly’ to fight against parasitic-like creatures as the begin to infect the United States.

Growing up is tough, let alone growing up with plenty of temptation, addiction and outside forces all mixing together. Euphoria follows Rue (played by Zendaya), a teenager coming out of rehab and recovering from addiction, who looks to find her place in the world, while dealing with the usual things a teenager deals with – love, school and figuring yourself out.

And now for some good ol’ British crime drama. Traces follows three forensic workers – Emma, Sarah and Kathy – as they work a case to uncover the true killer in a horrifying crime, all while dealing with their own personal demons in the small(ish) Scottish town. In true British fashion, the first season is only six episodes long, but there’s plenty of twists and turns to keep you guessing.

There’s just no escaping Sex and the City, with the popular TV series back for another round, although they’re doing it without Samantha. Exploring love and life in their 50s, Miranda, Carrie and Charlotte are all learning how to navigate these new waters, with a rumoured fourth member coming to the rescue in place of Samantha. It’ll be hard to beat the original series, but we’ll see if the show ages like fine wine.

If BINGE’s huge library of quality shows sounds like the perfect streaming service for you, there are three plans to choose from, with different inclusions on each plan tier. Prices start at $10 per month for a basic package and go up to $18 per month. Check out the plan inclusions in the below table. This table includes links to a referral partner.

Back to Binge shows

The Sex Lives of College Girls

The latest project from the mind of Mindy Kaling, The Sex Lives of College Girls explores, well, the sex lives of college girls. Four friends, all starting their college journey at Essex College in New England, all have the common aim of getting laid, all while navigating the rest of university life, including exams, independent living and all many of shenanigans and parties that distract them from their studies.

There’s nothing like terror on the high seas. The quietness of the ocean, and the bleakness of the weather is really an environment that can’t be replicated. Add in freezing cold temperatures, and you’ve got a recipe for creepiness and melancholy like no other. The North Water follows Patrick Sumner, an ex-army surgeon as he looks to escape his horrible experiences in the war by jumping onboard a whaling ship bound for the Artic. However, he doesn’t find peace on the ship, as the men he’s travelling with are darker than the deepest depths of the ocean.

What would happen if every man on the planet simply keeled over? That’s the question that Y: The Last Man looks to answer, with the show following Yorrick, an escape artist with a mysterious past, who is thrust into the spotlight as the last man left on the planet. What follows is a wild world of power struggles, answer-searching and uneasy alliances, but it’s ok, because Yorrick has a pet monkey, so what else could you need?

Another limited series, The Premise is the pet-project from BJ Novak (most well-known from being on The Office) that looks to provide a commentary on modern problems. With five, half-hour episodes exploring various topics, including sex tapes, gun violence, the world of internet trolls and many other issues, The Premise brings a dash of humour to humanise these problems to pave the way for more open conversations, giving you equal parts entertainment and brain food.

What We Do In the Shadows

Exploring the world of modern vampires living in US suburbia, What We Do In the Shadows is a series based on the 2014 mockumentary-style movie from Taiki Waititi. The series follows four vampire housemates living in Staten Island along with their human familiar, who does most of their bidding. Having transitioned from once-feared leaders to laidback and unassuming citizens, the series is a laugh with subtle undertones on the way the modern world works.

Based on the DC comics, Stargirl follows high school student Courtney Whitmore, who comes across the Cosmic Staff of Starman, a member of the Justice Society of America. Following her discovery, Courtney finds out that her stepfather was Starman’s sidekick, who in turn, teaches her about the Society, and pushes her to take on the mantle as a member of the Society as Stargirl.

What should I binge on BINGE?

It’s looking like BINGE is going to live up to its name with so many iconic shows available – you’re absolutely spoilt for choice. Whether you’re after classic sitcoms, dramas old and new, or reality TV, BINGE has you covered, with our article on the top movies on BINGE also worth checking out if you’re looking for something else to settle down on the couch with.

If you’re looking for something else, why not check out Disney+? There are two plan options to choose from – a monthly subscription at $11.99 per month, or prepay for a year at $119.99 and save on the monthly cost. Both plans include the same features, with unlimited downloads and the ability to stream on up to four screens at the same time.