Installing a ceiling fan is relatively cheap compared with other appliances such as air conditioners. Plus, it consumes far less energy, so there isn’t much of a downside to it. To give you a helping hand in this endeavor, we’ll look into the specifics and offer estimated prices that might be involved in the process of installing a new ceiling fan in your home. Thank us later.

What costs are involved in installing a ceiling fan? 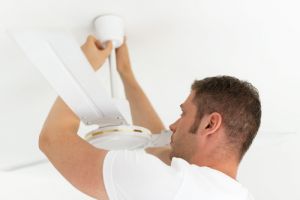 The full cost of installing a ceiling fan includes both the materials and labour. Here are some of the costs involved:

Once you’ve selected the type of ceiling fan you want, and how many fans you need, your location will additionally affect the total cost of the installation.

How long does it take to install a ceiling fan?

The specific requirements for each installation vary from job to job, but your installer should advise you how long it will take. However, it generally takes about one to two hours to install a ceiling fan for the first time.

How much does it cost to install a ceiling fan?

In Australia, electricians charge by the hour, and according to online service directory Hipages, you can expect the following prices:

The Good Guys offers the following price guide on its website for a full installation, although these costs are dependent on location, so may vary from state to state.

Can my retailer install a ceiling fan for me? 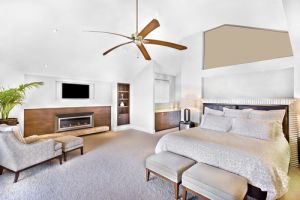 Yes, major retailers such as The Good Guys and Bunnings offer the service at an additional cost. They generally help organise a tradesperson to provide you with a quote. If you don’t go through a retailer, you must ensure the installation is carried out by a qualified electrician to proper Australian standards. A licensed tradie will assure that your ceiling fan is installed properly.

How much does a ceiling fan cost?

According to a number of appliance retailers, ceiling fans can cost about $100 – $500, depending on the type and the material it’s made from.

While most people usually buy fans to cool and circulate air on hot days, there are also reversible fans that are designed to re-distribute the hot air that rises to the ceiling from heaters in winter, giving you the best of both worlds all year round.

Before jumping into any purchase, it would be wise to get a few quotes from fan installers near you. Make sure you ask about all the costs involved, including any additional wiring you might need, as you won’t want to end up with bill shock at the end of the day. Ceiling fans are useful in Australia, whether you use them alongside an air conditioner or on their own, so we hope you’ve found this guide helpful to get a general idea of the costs involved!