Has reading the back of a frozen pizza box got you cooked? Is a small packet of cake mix whipping up a big batch of trouble? And what is the difference between a conventional oven and a fan-forced oven anyway?

Understanding recipes can be difficult, let alone knowing how each oven setting works on different appliances. It doesn’t help that different brands also put their own ‘innovative’ spin on these universal functions, either. A recent survey by Italian appliance manufacturer Smeg reveals nearly half of Aussies who use an oven, don’t fully understand how to use the majority of their oven settings. To help you make sense of all this, we’ve created a list of a few common oven settings and suggest a number of ways you can make the most out of your kitchen appliance.

Shop ovens with some of our referral partners^ 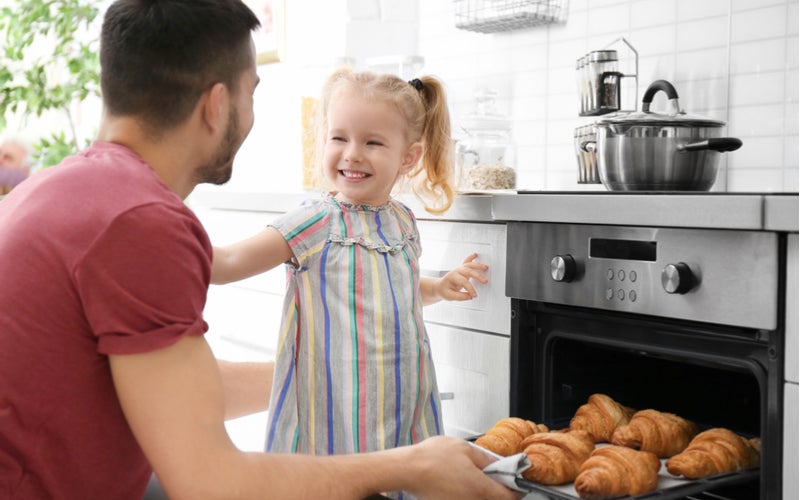 It takes two to tango when you’re dancing with both the upper and lower heating elements of the oven. You might recognise this setting in recipes or on the back of a frozen meal as ‘conventional’, ‘static’ or ‘traditional’ heating − otherwise known as the option that isn’t fan-forced.

The lines featured on the symbol indicate where the heating element is available. So, an icon with only one line at the top (or bottom) only contains the top, or lower, heating element. This mode best caters to bakers because it doesn’t utilise the oven fan, allowing the heat to naturally travel to the centre of the cavity. That’s why conventional oven cooking works best when the dish is placed in the centre of any bottom shelf.

Is your cake fluffy at the base but darkened to a crisp on top? The fan-forced mode can help you achieve greater consistency throughout because the top and lower elements are not active. Instead, the setting turns on both the fan and a circular heating element in order to spread hot air throughout the oven. This apparently encourages the appliance to heat up quickly, while shortening cooking time and lowering energy consumption.

Some brands like Beko boast ‘Side Venting Technology’ to prevent different odours and flavours from mingling. But the fan-forced function means air is already constantly moving, so the fan-forced setting should naturally minimise any mixing of flavours and odours. Keep in mind that compared to conventional oven cooking, the cooking temperature needed for oven fan cooking tends to drop by 20°C.

Want to avoid the disappointment of tucking into a succulent steak and finding it to be dry and chewy on the inside, making it tough to swallow? To help you maintain consistent temperature throughout your cooking you might like to use the fan-forced grill function on your oven.

It works slightly differently from a regular grill. The biggest difference is that it doesn’t require as much babysitting as the rear fan will apparently help cook the food from underneath, while also browning the top. This type of grill function generally works well with the door closed because the setting browns the food while the fan moves the heat created by the grill element around the oven. This also allows you to cook or reheat food using the lower elements.

Similar to the straight line on the conventional oven cooking symbol, the oven grill icon typically features wavy lines. When double lines are shown, it indicates heat is spread over the whole grill portion of the oven. But when the icon only shows one line, heat is usually directed towards the centre or another specific area of the grill.

Keep in mind that some grills must be used with the door closed, while others are designed to be kept open. Check the instruction manual to make sure you know how to stay safe in the kitchen.

There are only a few things more satisfying than walking into the familiar aroma of home-cooked comfort food. But just like a Christmas dinner, things can get a little overwhelming. Thankfully, the turbo grill function can help calm the intensity of different odours. It’s also suitable for simultaneously cooking larger amounts of food. However, good things take time, which is why this gentle mode of cooking can take longer than other settings.

If you want to take advantage of this function, invite guests to feast on roast turkey and end the night with an impressive soufflé.

Frozen on what to do with the snowflake icon on your oven? Keep cool and use the defrost function to quickly thaw food in time for dinner. Switching this feature on typically prompts the fan to distribute air throughout the cavity without using any heat. Electrolux claims air, without using any heat, speeds up defrosting times and best works with ‘delicate frozen foods’ such as scones or cakes with icing. It can also be used to defrost fish and poultry.

The oven light setting typically features a light or light bulb. Some ovens offer this feature independently from the oven, meaning you can turn the light on in the oven without the heat on.

Put the foil away and activate the warming function to enjoy freshly made food later on without drying out your roast chicken or burning a batch of choc chip cookies. A modern take on traditional warming drawers, this feature can also heat up plates.

A symbol containing the word “ECO” typically uses the grill, fan, and lower heating element to reduce the amount of energy used. Any ECO setting is usually suitable for cooking a small amount of food.

If you buy a pyrolytic oven, you might see an icon with a P symbol. This allows you to activate the pyrolytic self-cleaning function to deep clean the inside of your oven. This setting heats up the oven to about 400°C-500°C to turn any baked-on grease and grime into ash that you can then just wipe off. If there’s only a small bit of grime, you can opt to choose the icon which features both a P and the word ‘ECO’ to reduce energy usage.

Shop ovens with some of our referral partners^ 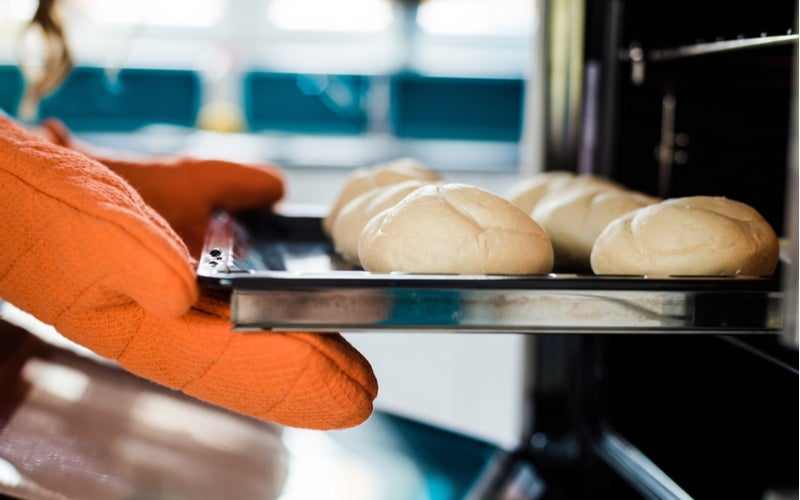 Let’s not forget about the dish-specific settings cooked up by different brands. Depending on the product you get, a variety of ovens come with a number of functions designed to cater to certain meal types.

Pizza mode is a pretty common setting on most ovens. The combination of the fan and both the upper and lower heating elements are designed to blow pizza lovers away by ensuring a crispy base. The setting can alternatively be used for meals that require browning, or simply taste better when crispy.

If you prefer to bake your bread at home, rather than buy a loaf at the store, look for a symbol that has a semi-circle and a few arrows pointing up. This option is suitable for proving yeast-type dough mixes, just check your manual to see how long you’ll need to place the dough in the oven.

So, there you have it! Take advantage of the different settings on your oven and get a little creative in the kitchen. If this has inspired you to buy a new oven, hit the link below to see plenty of ratings and reviews on a wide range of brands and products.