Linen shirts are a handy, and fashionable, addition to your wardrobe, but as you’ll find out, they become a wrinkly mess after you’ve washed and dried them. With linen clothes already requiring a bit of extra care and attention compared to your other clothes, getting them ready for a day out can also become a mission. So how exactly do you iron linen shirts, and can you even iron linen in the first place? Find out how to get your linen clothing wrinkle free in this Canstar Blue guide.

Can you iron linen?

The simple is yes, you can iron linen, but it’ll take a bit more effort than ironing any regular old shirt. You can iron linen with a traditional clothes iron, or you can use a garment steamer to help get rid of wrinkles, although you’ll have to be careful with the settings so that you don’t accidently burn or damage the linen. If you’re still not sure, it’s best to check the clothing tag as to how to wash and care for the linen, as some linen products are dry-clean only.

How to iron linen shirts 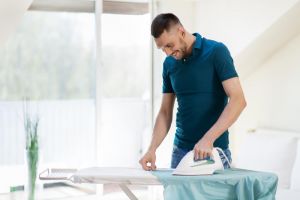 Ironing a linen shirt is much the same as ironing a traditional collared-shirt, except that you’ll have to keep the linen damp to get the best result. However, before you whip out the iron, it’s best to read the tag on the shirt to avoid any accidents, as your linen shirt may require additional care, or be taken to a dry-cleaner to be washed and dried properly.

To iron your linen shirt, set your iron to a high heat setting, or to the cotton/linen setting if it has one, as linen traditionally requires a higher heat. While your iron is heating up, you can do either two things: dampen your linen shirt, or grab a separate cloth and dampen that. Linen irons better while damp, with the separate cloth also creating a buffer between the hot iron and the linen itself, preventing potential damage or burning, although which method you go for is entirely up to. Just be sure to keep dampening the separate cloth or shirt as you go, as it won’t iron as well if dried. As with ironing any piece of clothing or material, make sure you keep the iron constantly moving to ensure you don’t accidently burn the material, and lightly pull and stretch the material as you go to ensure that you’re not ironing the wrinkles further into the fabric.

Once you’ve fully completed ironing your linen shirt, put it on a clothes hangar and hang it up in an uncrowded space to dry completely, leaving it for about 10 to 15 minutes for the fibers to cool.

Can you use a steamer on a linen shirt?

If you aren’t sure about ironing your linen shirt, you can use a garment steamer instead. Simply hang the linen shirt over a door and lightly dampen it, while setting your garment steamer to a high heat setting, or linen setting if it has one. Once the steamer is heated, slowly pass the steamer over the wrinkled linen until you’re satisfied with the results, ensuring that you also steamed the backside to get all of the wrinkles.

Can you iron linen pants?

Yes, any linen material can be ironed with a high heat setting, although the linen must be lightly damp to get the best results. However, you’ll have to be careful when ironing to avoid damaging the fabric or accidently burning a hole though it. 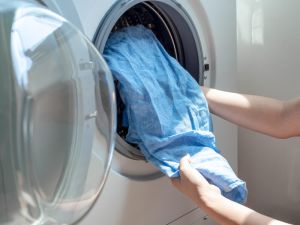 You can put your linen in the washing machine, with linen traditionally getting softer the more it’s washed. However, if it’s the first time you’re washing it, expect some shrinkage, as linen is a natural fibre. Linen can also be handwashed, and is generally the better option to avoid major shrinkage, although if in doubt, read the tag on the material to see how best to wash and care for your linen material.

How to dry linen

While linen can be handwashed or machine-washed, it’s best to line or air-dry linen rather than use a clothes dryer, as the natural linen fibres may break under the heat of the clothes dryer. You can technically put linen in the dryer for a short period of time at a low heat, although it’s generally safer to simply lay it flat on an air dryer. If you’re not sure, read the tag to see how to best dry and care for it.

Is ironing linen worth it?

Linen is a light material that’s a favourite when the weather turns hot and sticky, but one that can wrinkle quickly, which may impact on the fashion statement you’re trying to make. While not completely necessary to iron, as linen is supposed to be a relaxed fit, you can iron linen with a regular clothes iron to remove wrinkles without too much effort. However, whether you spend a few minutes ironing your linen clothes will be entirely up to you, as skipping the ironing stage gives you more time to trial outfits for your next event.