In market for a new smartphone, but don’t want to fork out $1,000? Good news — the current smartphone market has a huge selection of budget and mid-range phones that pack plenty of quality into a much cheaper package. One such device? The Nokia 5.3.

Nokia was once the king of mobile phones. It built a strong reputation for reliable and long-lasting devices, especially when it came to battery life. Then when smartphones hit the shelves, and Apple and Samsung took over the mobile phone market, Nokia went a bit quiet. But not anymore.

Nokia is back with a vengeance thanks to its latest budget smartphone offering. Curious about the Nokia 5.3? Let’s take a look at how this phone stacks up in terms of functionality, design, cameras and more.

Before we jump into a hands-on review of this device, here’s a quick look at the features and specs of the Nokia 5.3: 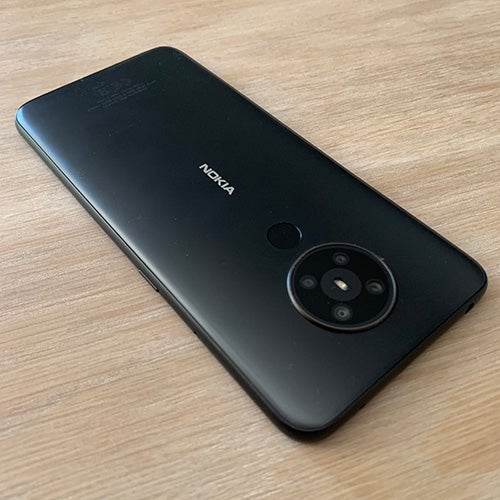 The Nokia 5.3 features a Finnish-designed Nordic-style appearance in three colours — Charcoal, Cyan and Sand. Colours can vary from retailer to retailer (with Charcoal and Cyan the only colours currently available in Australia), so if you have a preference for colour, you might need to shop around. The scratch-resistant composite used for the back, comes in a matte finish, which looks really sleek but does show fingerprints and smudges quite easily. A clear ‘jelly’ case is included, so you’ll be able to enjoy the look of the matte finish but without the smudges. It is a beautifully designed phone and has a real premium feel to it. Nokia has certainly gone in a different direction with the circular design of the rear cameras compared to other manufacturers and it certainly works well from a design perspective, sitting just above the fingerprint scanner.

The front-facing camera uses an in-screen water-drop-style notch, which doesn’t interfere with the display. As for the size of the phone, it measures in at 164.3 x 76.6 x 8.5 mm, while the screen is 6.55 inches with 2.5D glass and HD+ display. The screen quality is excellent — everything looks bright and vibrant, and it’s fairly easy to navigate. While the size of the phone is great for watching videos and using apps, if your hands are small, you might find it tricky to use the phone one-handed. 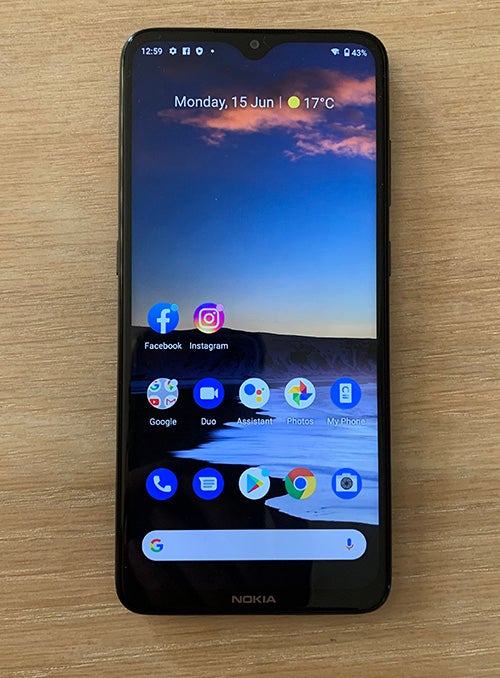 When it comes to performance, the Nokia 5.3 is easy to use, fast and runs rather seamlessly. It uses a Qualcomm Snapdragon 665 CPU (central processing unit) and runs the Android 10 operating system. For a mid-level device, there is certainly nothing to complain about in terms of performance. If you’re used to an older device and upgrade to the Nokia 5.3, you certainly won’t find its performance lacking.

It’s battery performance is also great, which is what you’d expect from a Nokia with a 4,000 mAh with the AI-assisted Adaptive Battery feature. What does this mean for performance? Using battery-draining apps, such as video streaming apps, doesn’t use as much power as other devices. To put that into perspective, watching 20 minutes of video on YouTube (default video quality specs), drained only 3% of the battery, compared to just 10 minutes of YouTube on the iPhone XS (with a 2,658 mAh battery) draining 4% battery.

In terms of storage, the Nokia 5.3 has 64GB as standard, but if you need more internal storage, there is a micro SD slot for up to 512GB additional storage. There’s also a headphone jack, and a set of headphones come included in the box.

The fingerprint reader is in a fairly convenient location, however the reader is a bit fussy and it might take a few taps and repositioning of your finger to get it to read your print. Setting up the fingerprint reader is also a little clunky and may take you several tries to get your whole fingerprint scanned. Passcode login is also not as seamless as other devices, but for a device at this price point, these are only small issues that really don’t affect your overall experience.

Perhaps the biggest mark of a smartphone is how its camera, or cameras, operate. The quad rear-camera setup includes 13 MP, 2 MP depth-sensor, 5 MP ultra-wide and 2 MP macro lenses. The macro lens produces some great results, especially if you love taking pictures of plants and nature. The rest of the cameras are also great, however the phone struggles somewhat taking pics in low light.

If you do try taking low-light photos, even if there is a faint light source like a distant window, it does struggle to focus and takes awhile to actually capture the image. You need to keep a steady hand, otherwise low-light photos are blurry and you might move the phone before the image has been captured. Although there is night mode included, you can get a better low-light performance from other devices both with and without night mode. Even pictures taken outdoors on an overcast day are quite dark, especially on screen when taking the photo. Many of these low-light images are more cold with the colour — iPhones on the other hand tend to take warmer low-light photos.

Another misstep is the zoom function. Like many budget smartphones, you won’t get the best zoom performance compared to premium devices. Perhaps this is the difference between a quad-camera setup on a budget device compared to a quad-camera setup on a premium device. However, if you don’t tend to use your camera zoom much, this shouldn’t be a deal breaker as it still does the job.

Camera performance is great overall, especially at this price point. If you’re a serious photo taker, maybe this isn’t the right device for you. Then again, a premium camera performance usually comes with the premium price tag. For everyday phone use and the occasional photo, there really isn’t anything to complain about with the Nokia 5.3. It’s still a great camera setup for the low price point. If you’re upgrading from a device that is several years old, this will probably feel like an upgrade as camera quality improves each year with updated technology, even for the budget phones on the market.

SIM-only plans for the Nokia 5.3

Currently the Nokia 5.3 is only available to buy outright from retailers such as JB Hi Fi, Harvey Norman and Officeworks. Once you’ve bought your phone, you’ll need a SIM-only plan to pair with your new device. Let’s take a quick look at some of the SIM-only phone plans available.

Is the Nokia 5.3 the right smartphone for me?

There are plenty of quality budget smartphones out there, and the Nokia 5.3 should certainly be included in the mix. While some manufacturers such as OPPO, have made a name for premium quality at budget prices, Nokia’s 5.3 isn’t too far off the mark.

It’s a phone that does everything you need it too. This device is easy to use, fast to operate and has a set of decent rear cameras (and of course, a front-facing camera). Battery performance is a standout, especially at this price range. But there is competition from other manufacturers, specifically OPPO, which also delivers great battery performance at similar prices.

The phone’s design is quite different to others on the market, and the matte finish does give it a certain paired-back and sleek style that is a common feature of Nordic design. It doesn’t look cheap and it certainly doesn’t feel cheap to use.

While there are some functional kinks, such as the fingerprint reader, it isn’t too obvious or frustrating to deter from an overall fantastic performance. Keep in mind, this is a device priced at under $400AU — the technology used would be an improvement on premium phones from a few years back. That’s just how fast mobile phone technology is improving with each year.

If you’ve been wondering where Nokia has been over recent years, there’s no doubt that a device like the Nokia 5.3 proves that it’s still a quality manufacturer. You really shouldn’t discount this well-known brand when comparing smartphones at cheap price points.