The 2018 FIFA World Cup is taking place in Russia in June and July. While this means bleary-eyed goal celebrations in Australia at around 2am, there will still be a large contingent of Aussie soccer fans who will be up for the cup – whether it’s watching the Socceroos, or just Egypt versus Saudi Arabia! If you’re one of them, read on to find out how to watch the World Cup, and even how to watch every game, live.

How to watch the World Cup in Australia

The most comprehensive way to watch the World Cup in Russia is to use Optus Sport – the only service that allows you to watch every game live. You need not be an existing Optus customer anymore and can purchase Optus Sport from just $15 a month. Alternatively, Optus Sport is frequently bundled into Optus phone and internet services and can be streamed data-free.

Many SIM-only plans and ‘phones on a plan’ include access to Optus Sport, which is often bundled in at no extra charge and can be streamed data-free. Currently, 12-month SIM plans costing $35 and over get access to Optus Sport for $0 extra per month. Data limits range from 3GB to a massive 60GB.

For soccer fans wishing to stream the World Cup on something larger than a 5 inch phone screen, Optus Sport can also be streamed to TVs via Google Chromecast as well as via Apple TV.

Users on eligible plans can also stream music data-free, as well as get access to the Nat Geo app to watch giraffes fighting in the plains of Africa.

The way to get Optus Sport included with your internet plan is to spend a minimum of around $90 a month on the ‘Entertainment Plan’ that includes Yes TV by Fetch. Basically, you’ll get an Optus-branded Fetch TV entertainment box with Optus Sport included. This gives you remote control access to Optus Sport as though it were regular TV, and you can also add on various channel packs as well.

For the extra monthly premium over standard plans, Optus includes quite a bit of extra kit. Fetch TV goes way beyond just soccer – its channel packs allow you to stream premium channels such as MTV, Nat Geo, Discovery, ESPN and more, while also allowing Netflix, Stan and YouTube streaming.

How to watch the World Cup with SBS 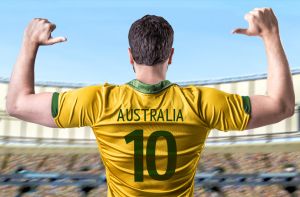 In addition to Optus Sport showing every single match, SBS will broadcast at least 19 World Cup fixtures live on free-to-air TV – including all three of Australia’s group games – with a ‘Match of the Day’ shown in high definition. In addition, all 64 games will be broadcast live via SBS Radio.

While not as comprehensive as Optus’ coverage, SBS will still air all Socceroos matches and at no monthly subscription cost.

What’s the best way to watch the World Cup in Australia?

The most comprehensive way to watch the 2018 FIFA World Cup in Australia is through Optus Sport. It’s the only way to stream every single match live, but for that you’d certainly need a fairly reliable and fast internet connection. SBS’s coverage is fairly limited in comparison but does have access to all Socceroos matches as well as various other coverage.

So, there you have it. There are two options – a commercial free-to-air broadcaster or a telco giant. How you watch the 2018 FIFA World Cup is up to you, but if you’re happy to pay for the privilege, it’s going to be hard to beat Optus Sport.