The ROG Phone 5 pulls no punches in being one of the best performance phones out there, and is intended for high-spec gaming with an obvious phone design for gamers. While the phone excels in speed, gaming performance and visuals, its features feel like overkill, making it not likely a good pick for the average phone user or gamer, writes Zachariah Kelly.

Here’s what you can expect from the ROG Phone 5: 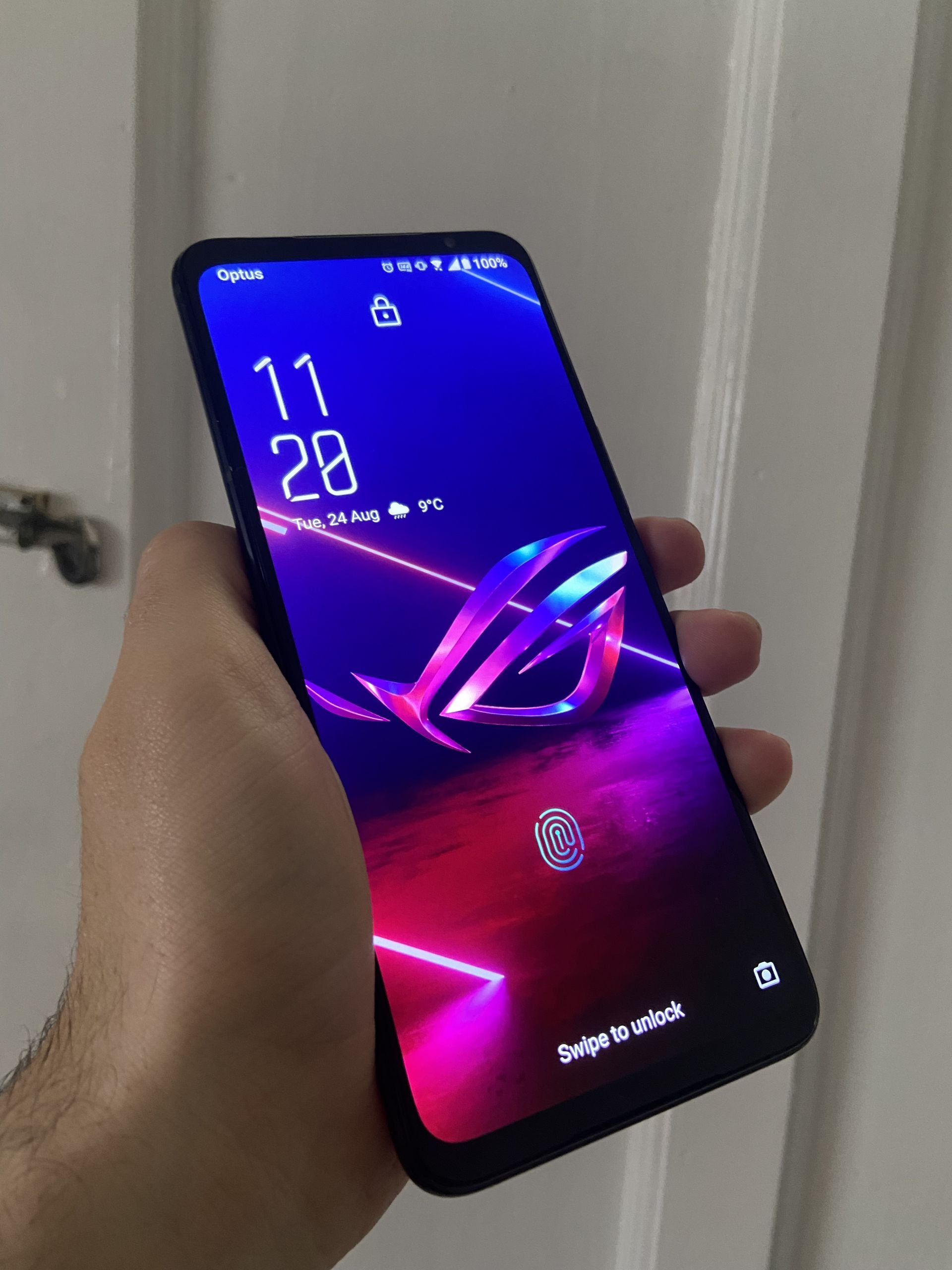 The ROG Phone 5’s intent is clear – it’s a phone for gamers, from the design to the performance. Aesthetically, it’s reminiscent of extravagant gaming PCs, with RGB lighting on the back included, and metallic red and blue details all over the chassis (on the back, the SIM card slot and the standby button).

It’s quite a large phone, as wide as an iPhone 11 with an extra half an inch in height, and the handset sits in your hands well when you’re gaming. When holding it with one hand, I found it difficult to press my thumb on the under-screen thumbprint reader, but overall it’s perfectly functional. Facial recognition is a treat as well and works instantly.

The screen is absolutely one of the highlights of the ROG Phone 5. Using a 144Hz refresh rate with a 1080 x 2448 resolution on an AMOLED display, you’d be hard-pressed finding a better screen for mobile gaming. That being said, the 144Hz refresh rate is certainly overkill. Right now, only a handful of games are capable of 144Hz gameplay, on top of the handful of games that are capable of 120Hz gameplay, so it’s difficult to call the 144Hz screen essential for mobile gaming. 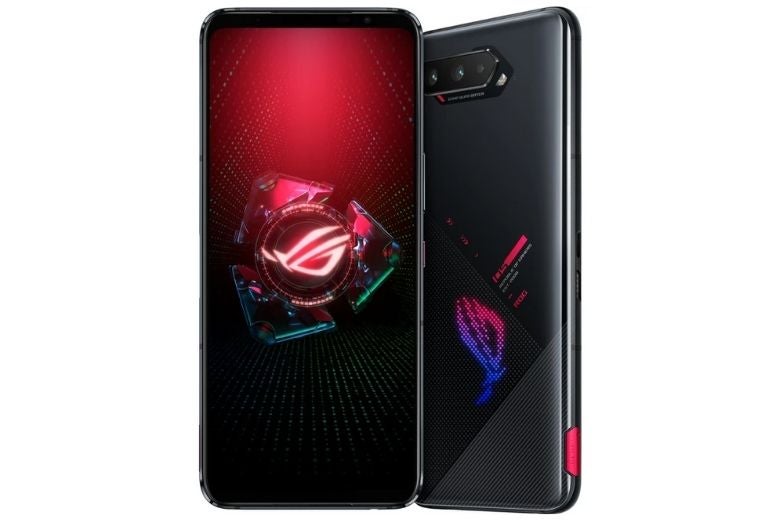 The ROG Phone 5 has brilliant performance, perfect for mobile gaming and crushing anything else, like social media use or casual music listening. It shouldn’t come as a surprise considering it’s purpose-built for high-performance gaming, but you can trust that this phone can do anything you’d want it to do. All of this said, its impressive specs are very over-the-top, and you’d likely never even notice the performance difference between this phone and other premium phones, even when gaming.

For daily use, the ROG Phone 5 acts flawlessly. It swipes fine, installs apps quickly, boots fast and doesn’t have long wait times. You’d expect all of these things from a premium smartphone absolutely, and at its $1,600 price point, it’s a necessity.

In terms of battery, it takes about 10 minutes of gameplay in Call of Duty: Mobile on the highest available settings for the phone to drop 3%, and it takes about 20 minutes of the phone being on standby to drop 1% in battery life. I went three days without having to charge this phone once, and when I did, it was fully charged within an hour.

There’s little to say bad about the ROG Phone 5’s performance – its screen is terrific for both gaming and Netflix, and its speakers support either task very well. When playing League of Legends: Wild Rift on maximum settings, the ROG Phone 5 crushes it, without any frame drops or issues. The phone didn’t even get that hot, although if it did, there is a solution for that problem – which is where we get into how extra this phone is.

On the side of the phone, you’ll notice a detachable rubber cap – removing this reveals two ports, one of them USB-C, which the phone is capable of charging through. These ports are for an entirely back-mounted fan to plug into and cool the back of your phone, in case it’s running hot. I never found a game or a time where using this was necessary, so it does seem like an unnecessary inclusion, especially since the phone handles heat reasonably well. It also can ruin your grip on the back of the device, although I found it manageable. 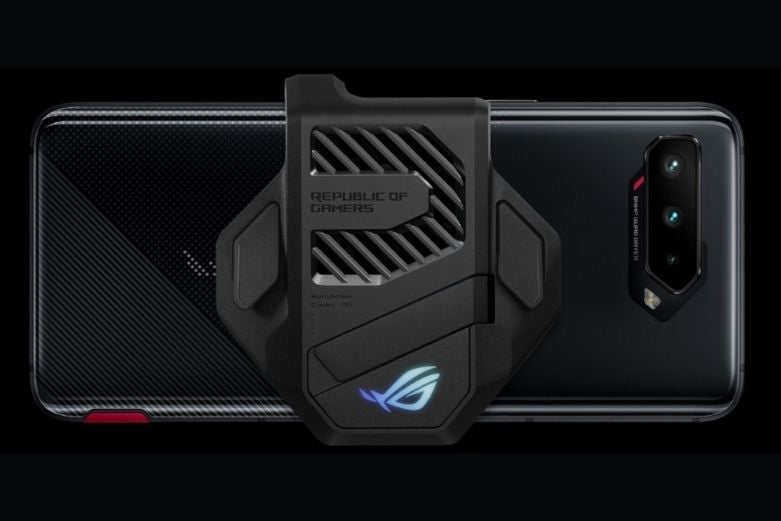 Speaking of overkill, this phone includes an RGB panel on the back that displays a few graphics – notably an ambient graphic with the ‘Republic of Gamers’ logo, a charging graphic, and an ‘X mode’ graphic for when the phone is on the highest settings, along with a few others. You can disable this of course, be it for battery or aesthetics, but who wants the panel to begin with, let alone needs it? It could be a neat trick for some people, but as someone who likes RGB computer builds, even I think it’s an unnecessary extra. The standard ROG Phone 5 comes with dotted RGB lighting on the back which you can change the colour of, whereas the Pro model (which comes with more RAM and storage capacity) comes with the backscreen seen below. 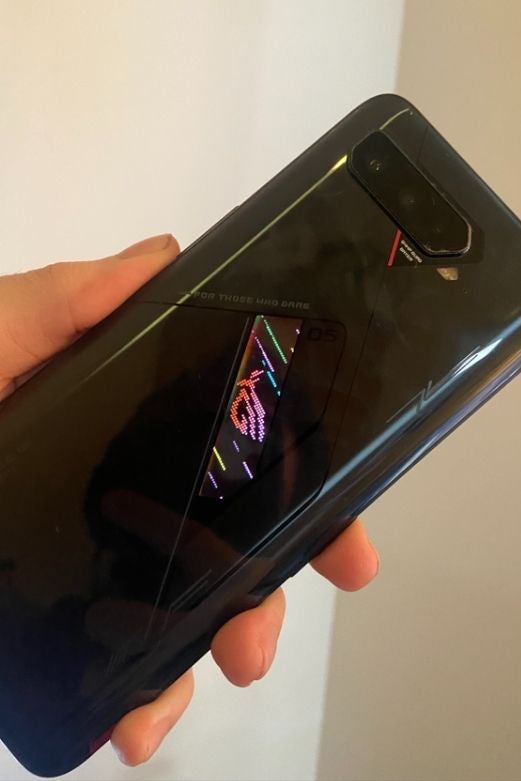 Just like the ROG Phone 3 before it, the ROG Phone 5 includes some pretty average cameras. (We didn’t make a mistake by the way, there is no such thing as a ROG Phone 4). Apart from the typical slew of camera modes mentioned earlier, it’s unfortunate that, given the phone’s $1,600 price tag, the camera performance isn’t better. There aren’t any absent features, it just appears that for what’s there, there isn’t stellar performance – but it’s still fine.

These cameras definitely get the job done for sure, and with three cameras on the back, you’re not restricted to just one type of shot. It’s also super easy to use. Those are really the only big takeaways from the cameras of the ROG Phone 5.

The ROG Phone 5 has capable cameras, but it is not a camera phone. Photos are what the ROG Phone 5 struggles with, as if it cut this corner to make everything else brilliant. Perhaps I’m being cruel, as the photos I took show decent colour, little blur and overall passable consistency, but I feel like photos I’ve taken with much cheaper phones have been of higher quality.

It’s not like the ROG Phone 5 target audience of gamers would need powerful cameras anyway, so that’s an important thing to think about in terms of this phone – how much do you value the cameras on your phone? I don’t take a lot of shots, but I play a lot of games and like good performance, so it seems like a great phone for me, but maybe not for another user.

Should I buy the ROG Phone 5?

I can’t recommend the ROG Phone 5 to most users, however I can recommend it to hardcore gamers who have money to spend. This isn’t the phone for the average person – it’s too expensive to justify basic use, despite having some of the best processor and graphics technology ever put into a handset.

You’ll see similar performance from Asus’ Zenfone 8 which was also released this year, but for only $999 – a $600 cheaper price point than the ROG Phone 5. The Zenfone 8 has all the same basic features in a smaller device, without a 144Hz screen and without the absolutely over-the-top internal specs.

You’d also see similar performance on the OPPO Find X3 Pro, or the Samsung Galaxy S21+. I’d mention the iPhone 12 here as well, which plays games just fine, although it only sports a 90Hz screen: down from the 120Hz screens on all of these other phones, and the 144hz screen on the ROG Phone 5.

Consider the ROG Phone 5 if: You’re a hardcore mobile gamer with money to burn.

Don’t consider the ROG Phone 5 if: You’re after a premium phone with good cameras and a less eccentric design.

Phone plans for the ROG Phone 5

The ROG Phone 5 isn’t available from any telcos on a plan in Australia, but it will work with any phone plan you pair with it. You can find the ROG Phone 5 at JB Hi-Fi, Dick Smith and online retailers, and you can find postpaid and prepaid plans in the table below.

Product used for review/testing was a free sample provided by ASUS.