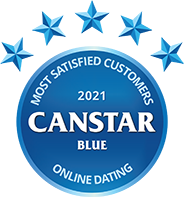 Finding love and making meaningful connections is now literally at our fingertips, thanks to the World Wide Web and online dating. Our latest survey of online dating users found that a fifth (20%) have met a long-term partner through an online dating service, and a similar number (21%) said they prefer online dating over being set up on blind dates by friends or family. In the 21st century we live in, romance is in the air (or rather, in the digital clouds) as app and website developers take up the role of a modern-day Cupid by matching people with similar interests, preferences and values. Our research also found that nearly two in five Aussies (39%) have tried multiple dating sites and apps, so what’s the best platform for singles ready to mingle?

That’s where we can help. Canstar Blue has rated popular online dating services based on a survey of nearly 800 single Australians, who were asked to share their experiences and feedback on the online dating platforms they’ve used in the last three years. Respondents rated their services on factors such as ease of sign-up, number of eligible matches provided, relevance of matches, communication channels, ease of site/app navigation, value for money and overall satisfaction. Those that received the minimum survey sample size of 30 responses are compared in our report.

So, which online dating service is worth a ‘swipe right?’ Aussies rated Hinge the best online dating app for overall satisfaction and in other key categories. 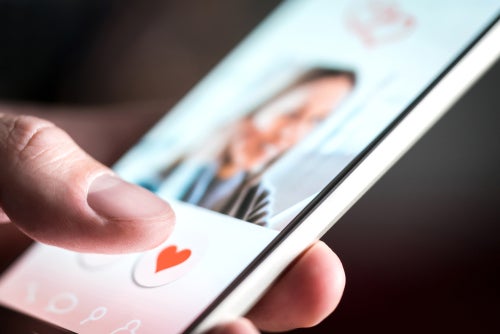 Here are the best online dating services (apps & sites) in Australia, as rated by singles in Canstar Blue’s latest review:

Hinge topped our online dating apps ratings with five-star reviews for ease of sign-up, ways of communication, number of eligible matches provided and overall satisfaction. Runner-up Bumble was the only other online dating service to receive five stars in any category and received top scores for relevance of matches, communication channels, ease of site/app navigation, ease of sign-up, value for money and overall satisfaction. Bumble also landed on four stars for overall satisfaction, while Tinder and eHarmony got three stars overall and Plenty of Fish finished on just two stars. All are available to download on iOS and Android.

Hinge is marketed as the dating app designed to be deleted based on the belief that anyone looking for love should be able to find it on Hinge. It uses a Nobel-Prize-winning matchmaking algorithm that’s claimed to help users go on better quality dates, and also offers ‘Most Compatible’ suggestions which showcase protentional matches you’re most likely to have mutual chemistry with, based on your age, location, interests and preferences. You can activate a profile by uploading photos and answering three prompted questions, plus there are ‘reply reminders’ to let you know when it’s your turn to reply and limit accidental ghosting.

Bumble is the online dating app where women make the first move, with the aim to challenge the antiquated rules of dating. Bumble isn’t just for dating either, it’s become a networking platform for people of all genders to make real-world connections in all areas of their lives, including in business with Bumble Bizz, which allows users to meet professionals in their fields and Bumble BFF for meeting new friends online. Bumble also has features such as Top Filters to filter the profiles of potential matches, SuperSwipe to get people’s attention and Spotlight to put yourself at the top of the stack for 30 minutes.

Tinder is one of the world’s most popular dating apps and marketed as your most dependable wingmate whatever you’re looking for − whether that’s meeting new people near you, expanding your social network or meeting locals when you’re travelling. Tinder is also super easy to use, just use the Swipe Right feature to like someone, or swipe left to pass. If someone likes you back, it’s a match! The app also has a double opt-in algorithm which means that two people will only match when there’s a mutual interest, which takes the stress and fear of rejection out of the equation.

With over 20 years of experience and research into its members’ needs, eHarmony is one of the oldest online dating platforms. It’s claimed to use a unique Compatibility Matching System to narrow the field of single prospects to match users with a select group of compatible matches with similar personalities, interests, values and even religious beliefs. You can use the eHarmony website or app to set up a profile and receive all your matches in your inbox. eHarmony also offers icebreakers and a new messaging platform to chat to other singles.

Plenty of Fish (POF) is marketed as an online dating service for grown-ups. It allows users to search for members with specific traits or interests, and offers multiple ways to connect and match with other singles online, including icebreakers to start conversations, top filters and free messaging. It’s also one of the few dating apps to feature livestreaming.

Which app is best for online dating for free?

Most dating apps are free to use, including platforms like Hinge, Bumble and Tinder. However, you may need to upgrade to a paid membership or subscription to unlock advanced features or increase your reach online. Nearly a third of singles we surveyed (29%) had a paid subscription to an online dating app, with an average monthly spend of $29, while 71% of respondents used a free version of their app. Whether you opt for a paid version or not will depend on your personal preferences and budget. Check out our guide on dating apps to find out more about free and subscription-based options.

Why do Aussies use online dating?

Our survey asked respondents to list their main reasons for using an online dating service and responses included:

In terms of what singles look for in a potential partner, a good personality and values were the number one characteristics most survey respondents looked for (75%), followed by physical attractiveness (57%) and humour (52%).

Where’s the best place to meet someone from a dating app?

A café seemed to be the most common location for a meet-up among nearly half of online dating users (44%) surveyed, followed by a bar or pub (23%) and a park (10%). Whatever you prefer, just don’t forget the golden rule of online dating − always meet in a public place and tell at least one person where you are.

Are online dating apps safe to use?

Dating apps are typically safe to use and most platforms have clear terms of service and privacy policies to protect users online. However, it’s important to note that online dating services are not liable for the conduct of any users offline, so it’s important to keep your wits about you when meeting someone from a dating app face-to-face. Our survey found that 27% of respondents have had a negative dating experience with an online date, while 23% have been catfished online (by someone who did not match their profile), and 30% have been ghosted or blocked by someone on a dating app. With that said, online dating is a fun and practical way to date for most people, especially since the COVID-19 pandemic, with 19% of respondents having used dating sites more during COVID-19. What’s more, most people have had more positive experiences than bad, so don’t be afraid to throw your hat in the ring to find love!

Canstar Blue surveyed more than 6,000 Australian adults across a range of categories to measure and track customer satisfaction, via ISO 26362 accredited research panels managed by Qualtrics. The outcomes reported are the results from people who’ve used an online dating service in the last three years – in this case, 778 people.