Video streaming services have been big business in Australia over the past decade, with no shortage of options for households to tune into. But with plenty of options and plans comes plenty of decisions to be made, meaning you’ll have to ask yourself, am I paying too much, and am I really getting the most out of my streaming platform?

Watching TV has always been a mainstay in many homes, with the nightly or weekly episodes of our favourite shows enough to get the whole family crowded on the couch. But as the market changes and free-to-air TV has given way to on-demand services like Netflix, it’s not uncommon for Aussie households to have a subscription to a streaming service – and likely multiple subscriptions – but are they all worth it? If you’re looking to maybe cut back on your TV hours, or do away with streaming services altogether to save some money, or you’re simply just interested to see how much others are paying for their services, in this guide we’ll look at how much Australians are paying, and just how much the major services cost. This guide uses research conducted by Canstar Blue, taken from our customer satisfaction ratings for Pay TV & Streaming services, published in 2021. 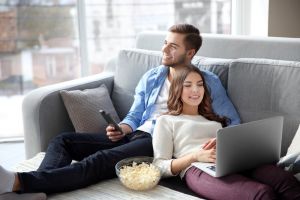 The average Australian household pays $42 per month for their streaming service(s), which works out to be $504 per year. Customers in the NT were paying the most ($66), while those in the ACT spent the least ($32). Here is a breakdown of how much people pay, on average, for their video streaming services by state and territory:

For the majority of states and territories, there’s not much difference between household expenditure. The 2021 data also showed that households were spending the same amount of money on streaming services as they were in 2020, with no change in average monthly spend, although an average spend of over $40 indicates that most households have multiple streaming services.

How much are streaming services in Australia?

Depending on which plan and provider you sign up with, a streaming subscription can cost anywhere between $5 and $100 per month. The cost will vary from service to service, as some, like Amazon Prime Video, Apple TV+ and Disney+, only offer one monthly plan, while other brands, such as Netflix, Stan and BINGE, all offer multiple tiers to choose from, each with more features and higher quality the more you pay.

For a breakdown of the costs and features of the major video streaming services available in Australia, check out the table below.

Information collected from each streaming service’s website. Accurate as of May, 2022.

Is it worth having multiple streaming services?

With the survey results stating that Aussies are spending on average $42 per month on streaming services, it’s very likely that each household has at least two or three subscriptions, but are they all worth it? Realistically, it depends on your preferences. You may find that a particular streaming platform has your favourite show, but another service is better for new releases, or you may have one purely to watch sports. And with more services launching in Australia – including the launch of Paramount+ on August 11 – or broadcasting rights and deals being struck, all are looking to offer exclusive titles to reel users in, meaning which streaming platform you pay for ultimately comes down to your tastes, and your budget.

Thinking about signing up to a new streaming service? Why not try BINGE? Prices start at $10 per month for a basic package and go up to $18 per month. Check out the plan inclusions in the below table. This table includes links to a referral partner.

Could you be saving money on your streaming service?

With Aussies spending over $40 per month on streaming services according to Canstar Blue research, it appears that many have signed up to multiple streaming platforms, with the most expensive streaming subscriptions generally topping out at about $20 per month. However, with services like Foxtel easily costing households over $100 per month, some may have all the channels they need, but are paying for it.

But if you are one of those households that have multiple streaming subscriptions and are looking to maybe cut back, how can you save on your streaming service?

Alternatively, you could be making use of a streaming service’s free trial period if they have one, or look to drop down a price tier on your subscription. While you may sacrifice some screen quality, the monthly savings could ease the sting. You can also take advantage of an annual subscription (if your streaming service offers it), as while it’s a larger upfront cost, it’ll work out cheaper on a monthly basis. And if you really want to save money on streaming services, you can always scrounge off your mates, with 28% of survey respondents saying that they pay for a service but share the login details with others, meaning there’s a few unsung heroes out there.

Regardless of how many streaming services you may be paying for, it’s hard to ignore their value, with each platform offering hours upon hours of entertainment to suit every taste, whether you prefer an action-packed A-List movie or a C-grade horror film full of drama students. 63% of respondents in Canstar Blue’s latest survey stated that they believe that their streaming service is well worth the money, and while sticking to a budget is important (and you should always look to ensure you’re getting the best value for your dollar), popping on a movie for the whole family and settling in with a bowl of popcorn is a tough experience to beat.