DAZN – pronounced ‘Dazone’ – is a live and on-demand sports streaming platform based in the UK that primarily focusses on boxing fights, but has its eyes set on other sporting events and competitions from around the world to offer customers a solid one-two combo.

Founded in 2015, the British service has made its way to the ring in multiple countries, with Australia next to be added to the list with sports fans able to sign up as of December 1, although subscription costs and the full range of content available won’t be known until its official launch. 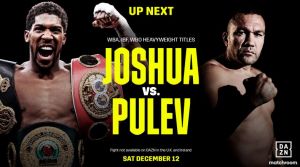 However, the content that is known to be on DAZN will get a few Aussie boxing fans keen, with the platform broadcasting the following fights:

Each fight is expected to play host to additional content across DAZN, including interviews, match previews and analysis, as well as undercard fights, with more information likely to be released once the platform has gone live.

How can I watch DAZN?

According to the DAZN Australia website, it will be available across multiple brands of Smart TVs, set-top boxes, streaming sticks, smartphones, tablets and gaming consoles, although the full list isn’t available at the time of writing. However, with the website claiming “Big Fights. Any Device.” viewers can expect to be able to tune in anywhere for some boxing action. A DAZN app is also available to download for free on both iOS and Android operating systems, although you’ll likely need an account to make use of the app.

When it comes to what other content will be available, and how much viewers will have to shell out in terms of subscribing to the service, it looks like DAZN are aiming to get in before the final bell to take it to current heavyweight Kayo and newcomer Stan Sports.

Regardless of whether you’re a boxing fan or just a fan of sports in general, DAZN may be well worth keeping an eye on as it looks to launch in Australia on December 1.