The tablet has become a mainstay within households over the past few years, with the ease of use and diversity of functions winning over many consumers. But in a market that has quickly become flooded with brands and products, choosing a tablet for yourself or your family has become more difficult. To help relieve stress levels, Acer has produced a variety of tablets to help make the decision easier.

Acer began in the electronics industry in the 1970s, and has since diversified into personal computers, VR and tablets. Due to its heritage and global presence, Acer does command a bit of respect within both the electronics market as a whole, and in the tablet market itself, with the company producing a range of cheaper products for the masses. Check out some of the products on offer from the electronics giant below. 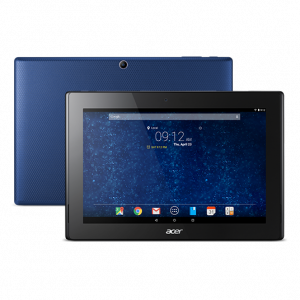 The latest within the Iconia line, the Tab10 runs the latest Android technology on a Quad-core Intel processor, giving consumers a smooth experience on the 10.1inch display. The Tab10 also contains a 1920×1200 resolution, with the option of four speakers, for those big on entertainment.

If you’re after something a bit more work related, the Tab10 also comes with Bluetooth and Wi-Fi capabilities, making it suitable for both everyday use and for those projects on the go. A top storage capacity of 128GB through a microSD card also means that you won’t have to worry about losing your work files either.

Starting at under $200, the Tab10 is a good all-round model for consumers, with the more expensive model still a competitively priced $300. 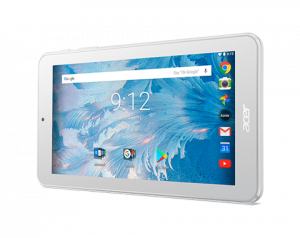 Designed for those after something smaller, the One 7 series produces a resolution of 1024×600 on a 7inch display, with a 1.3GHz processor keeping things running smoothly. Acer also boasts a 178 degree ISP (In-Plane Switching), which means you won’t lose picture or video quality when viewing the screen from other angles other than straight-on.

Starting at 16GB storage, with the option to expand to 128GB with a microSD card, the One 7 is shaped to be the go-to option for the frequent flyer.

With both models costing under $100, the One 7 would also be a contender for casual users, or those new to the tablet experience. 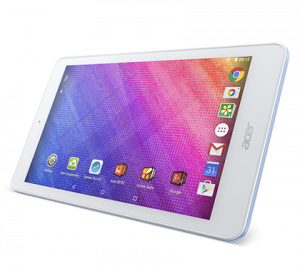 The next model up, the One 8 produces a high quality 1280×800 resolution on an 8inch screen, as well as an improved 5MP camera. As well as a 9 hour battery life, the One 8 looks to be a solid option within the tablet market.

The One 8 also contains handy new functions, including the EZ Snap and the EZ mode, designed to streamline processes and make the tablet easier to use. The EZ Mode allows users to customise the UI (User Interface) to allow for a more personalised feeling, while the EZ Snap allows users to take a screenshot with a three finger pinch, as well as more freehand editing tools.

Available for around $100, the One 8 is the middle ground suitable for many consumers, with enough functions and capabilities to keep families happy, as well as single-users. 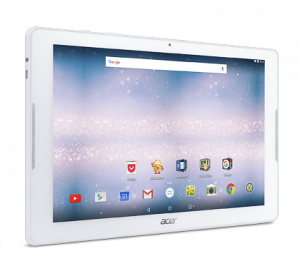 The top of the line for the Acer One series, the One 10 offers similar designs and features but in a bigger package. With a 10.1inch display, the One 10 is capable of producing a resolution of up to 1920×1200 in the most expensive model. Most models within the One 10 line-up carry a 1.3GHz processor, with a 1.5GHz processor also available.

The Acer One 10 has an improved dual-audio system, perfect for those entertainment-heavy users, and carries dual MicroUSB ports to allow for better charging and accessory usage. Acer also state the One 10 has a 10 hour battery life, something that will keep the family happy.

Price-wise, the One 10 is slightly more expensive, but it won’t break the bank by any means. With all the added extras and functions, the One 10 may be best suited for those constantly using a tablet, or for general household use. 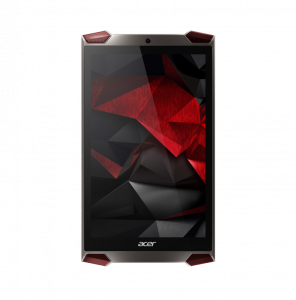 Acer has been a prominent player in the gaming computer market, and has transferred that knowledge into the table market with the Acer Predator 8. Built for gamers on the go, the Predator 8 includes high quality specs to keep the gamer inside satisfied, all in an 8inch screen.

Acer has included a variety of features to enhance the gaming experience, including grip pads for those intense sessions, as well as two Haptic motors for game vibration. Additional features also include the Predator Quadio system, which includes four powerful speakers that Acer claim to make the Predator 8 the loudest tablet on the market. These speakers also follow the tablet when turned from portrait to landscape, ensuring that the sound is kept crisp and accurate.

Powering the gaming experience, the Predator 8 contains an Intel x7 quad-core processor, as well as an Intel HD Graphics Card. Including a 5MP camera and Wi-Fi and Bluetooth capabilities, you’ll be able to do more than just gaming.

Is an Acer Tablet Worth the Money?

In such a diverse market that is constantly evolving and improving, it can be tough to nail down the best tablet fit for your usage. How you use, or how you plan on using, a tablet will impact on which brand or product you go with, so it’s always best to do your research before purchasing.

Acer itself is a globally renowned company, and offers a wide range of products and models to suit household needs and wants. The inclusion of a gaming tablet also shows that it means business, but again, that doesn’t always mean it’ll be the company for you. But if you’re sticking to a budget, or after something simple, then Acer just may be the brand for you.