Standby power or ‘phantom load’ as it’s sometimes called, refers to electricity that is consumed by appliances left on standby mode. It essentially means you’re paying for electricity that you’re not even using. So how much does it cost your household?

As you will see in this article, the cost of an individual appliance left on standby mode is pretty small, but it certainly adds up. In fact, EnergyAustralia estimates standby electricity wastage can contribute up to 10 per cent of your electricity bill – money which we bet you’d rather see in your pocket than in your energy retailer’s bank account.

So how much could standby power be costing you? To find out, Canstar Blue takes a close look at the standby costs of common household appliances.

How much does standby power cost? 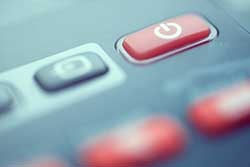 Standby power could cost you well over $100 per year, depending on a myriad of factors, including the number of appliances left on standby, the appliance efficiency ratings and the rate you pay for electricity.

The table below looks at a household with 10 standard appliances. In this case, we worked out that this household is spending as much as $90 per year on wasted electricity. Of course, many households have more appliances and devices than the ones we’ve listed or have multiple of the same appliance, so be sure to take this into consideration.

The cost of standby power

*Appliance left on standby mode, 24 hours per day, 365 days per year. Assumes an electricity rate of 28.7c/kWh. General guide only.

Standby electricity efficiency has improved considerably in recent years. But while standby power might cost you less now than it would have done 10 years ago, there are still savings to be made.

Some of the most expensive appliances/devices from the table above include games consoles, washing machines and dishwashers. Wireless modems can also add a hefty amount to your energy bill, though it’s not technically on standby and it might be impractical for you to switch off the internet every night.

Televisions, DVD players and microwaves, on the other hand consume very little electricity. That said, you can see how these small standby electricity expenses can add up when forgotten about. How many TVs do you have on standby right now?

Why do appliances use electricity on standby?

If an appliance has a remote control, LED light, digital clock, touch-on button, or similar function, then you can bet it uses standby electricity. The amount of electricity that feeds into the device will be absolutely miniscule – just enough to power its sensors so it can be switched back on.

Some of the more expensive devices to leave on standby are ones which run background functions. Take a gaming console for example. The 5.4W figure we used in the example was actually pretty conservative. Many new consoles will regularly run Wi-Fi checks, download content and be ready for remote, touch or voice activation. This can consume more than 10W of electricity while in standby mode.

While you’re here, why not take the time to compare energy plans in your area. Follow the links below to compare the cheapest deals on our database for your state.

So far we have discussed the cost of standby electricity when the appliance is plugged in, but switched off. That is often referred to as ‘passive standby’. ‘Active standby’ is when a device is turned on but not in use. For example, when a games console or DVD player is switched on, but no media is playing. Active standby mode can cost you five to ten times more in electricity than passive standby mode, so if your appliance is running, make sure you’re using it.

How to reduce standby energy costs

Expert tips: How to clean your dishwasher