A new, lower-priced 5G phone has arrived on Aussie shelves, with Motorola’s mid-range Moto G62 5G now available from local retailers. Priced at a very competitive $399, the G62 5G is a triple-camera, big-battery smartphone, with a focus on entertainment thanks to its large display and immersive audio.

In addition to what looks to be some great specs for an under-$400 device, the Moto G62 5G will also be available to buy on phone plans from Telstra, Optus and Vodafone beginning in August. This makes the G62 5G the first Motorola smartphone to be offered by all three big Aussie telcos in more than 10 years, and gives potential buyers a wider range of plans and purchasing options.

“What’s special about the Moto G62 5G is that it’s a compact device built for entertainment at a very competitive price point,” Kurt Bonnici, Head of Motorola for Australia and New Zealand said.

“Always built on consumer insights, the Moto G62 5G delivers what matters most to our consumers and we look forward to seeing them enjoy all it has to offer.”

The latest addition to the Moto G family is all about entertainment, boasting a 6.5-inch screen with a Full HD+ display for crisp details and bright colours. What’s extra impressive is that the G62 5G comes with a fast 120Hz refresh rate: this means scrolling, video and gaming will be extra smooth, with less lag, motion blur or choppiness. It’s the same refresh rate found on premium phones such as the iPhone 13 or Samsung Galaxy S22, so it’s quite a coup to score this feature at a lower price point.

In addition to a great display, the Moto G62 5G also includes extra-powerful sound thanks to the inclusion of Dolby Atmos spatial audio. Combined with the stereo speakers, Dolby Atmos delivers higher volume and a wider sound range, which Motorola says will boost audio by up to 39% when compared to other Moto G devices. This could be a big plus for buyers who prefer to watch or listen to content without headphones, but are frustrated by the tinny or low volume from other mid-range devices.

Internally, the Moto G62 5G features a Qualcomm Snapdragon 480+ 5G processor, along with 4GB of RAM and 128GB of internal storage, plus microSD support. This is around what you’d expect for a upper budget/lower mid-range phone, but should deliver a solid performance. The G62 also runs Android 12 out of the box, but Motorola says that customers can only expect one Android update for this device, meaning your OS will max out at Android 13. You’ll still get two years of security updates, but it’s something to be aware of if you’re looking to hold on to your device for several years before upgrading.

Motorola has included a triple camera setup in back, plus a solitary 16-megapixel camera with Quad Pixel technology in front. The rear cameras include a 50-megapixel Quad Pixel lens, an 8-megapixel ultra-wide angle lens, and a 2-megapixel Macro Vision camera for ultra-close shots. Motorola’s Quad Pixel tech is designed for brighter, bolder shots in low light, while the ultra-wide camera can fit up to 4x more in each frame, and includes a depth sensor for automatic background blurring. 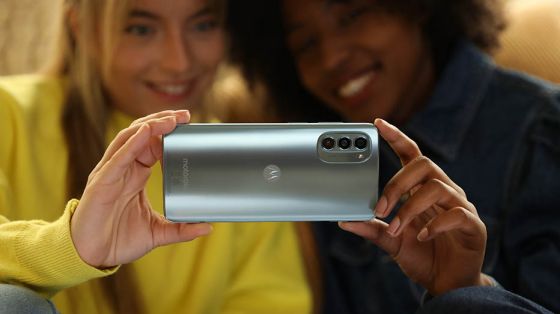 Built-in camera features include Panorama, Night Vision, Dual Capture (for simultaneous front and back shots), Portrait, Ultra-Res and Pro Mode, along with Google Lens integration and up to 8x digital zoom on the rear cameras. The rear camera can also film in FHD at up to 60 frames per second, and includes modes such as Timelapse, Slow Motion, Macro, and Video Stabilisation and Snapshot.

Rounding out the Moto G62 5G’s key features, the device is loaded with a big 5,000mAh battery that supports 15W TurboPower charging, which can give you several more hours of life with just a few minutes on the charger. You’ll also get face unlock and fingerprint security, a headphone jack, Google Assistant voice control, and 5G connectivity for ultra-fast speeds.

The Moto G62 5G is priced at $399 and will be available in Midnight Grey. You can buy the Moto G62 outright from Motorola, JB Hi-Fi, Officeworks, The Good Guys, Mobileciti, and Big W now, or on a phone plan from Vodafone, Optus or Telstra beginning from August 1, 2022.

While we don’t yet have price or plan details for the Motorola G62 5G on a telco plan, you can compare postpaid plans from Telstra, Optus and Vodafone below.