As a brand gaining more traction in the Australian market, Realme is a more budget-friendly phone manufacturer with its origins linked to popular brand OPPO. As part of its ethos, Realme focuses on bringing quality technology to users but at affordable price points.

The Realme C21 is one such device, priced at $199 AUD RRP, making it one of the most affordable smartphones that Realme produces. With devices at this price point, you can typically expect the basics but without the most premium features. Let’s take a look at how the Realme C21 stacks up in real-world use. 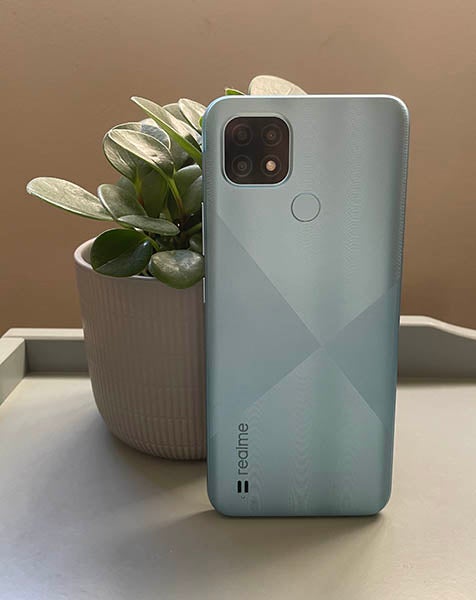 Here are some of the features and specifications of the Realme C21: 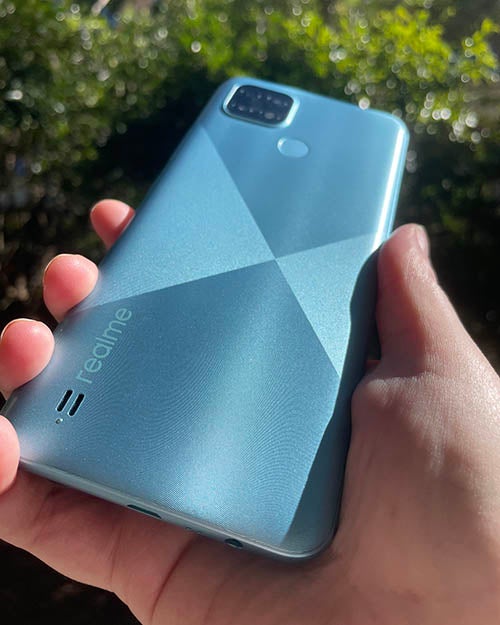 Realme has always been a bit more on the adventurous side with how it designs its phones, and the C21 is certainly different compared to other devices. You’ll have a choice between the Cross Black or Cross Blue colourways, and I was given the Cross Blue, which is a beautiful light powder blue with a metallic finish. The back of the phone has an interesting lined texture and geometric design. The geometric ‘cross’ design on the back has the lines going in different directions, which accentuates that kind of holographic light play. Unfortunately there isn’t a case included, and the texture is prone to picking up dirt: however said texture does make it smudge-proof, so it will still look good without a case.

The phone is quite light and slim, and it looks and feels quite sleek, weighing 190g and with a 6.5 inch display. It certainly doesn’t look cheap or like you might expect a sub-$200 phone to look, which is a testament to how Realme designs phones. It’s not too big and provides a nice-sized viewing experience, however like many phones around this size, if you have smaller hands, one-handed use might be a little tricky at times.

As for the screen, it’s really nice and clear, something that tends to be a common trait with Realme devices. It also tends to have really vibrant colours, which is something I’ve found with other Realme devices and a contrast to what I’ve experienced with Nokia devices.

You’ll get fingerprint and facial unlocking, with the fingerprint scanner located on the back of the phone. I found unlocking with both options to be really quick and seamless, which was fairly impressive for a phone at this price point, where you might expect a little slowness.

One small issue I had was the placement of the speaker, which is located on the back of the phone. While most people will likely not have an issue with this, you run the risk of blocking the speakers with your hand when you’re holding the phone. If you’re lying your phone down on a surface, like a table, and want to listen to music or play a video through the speakers, the audio is quite muffled and this is particularly noticeable with music.

Overall, the C21 looks really nice, and feels just as nice to use. Even though it ventures on the larger size, the slimness and lightness of the device makes it fairly comfortable to use and the screen size provides a good viewing experience. For just under the $200 price point, Realme has done a great job at producing a phone that doesn’t look or feel cheap. 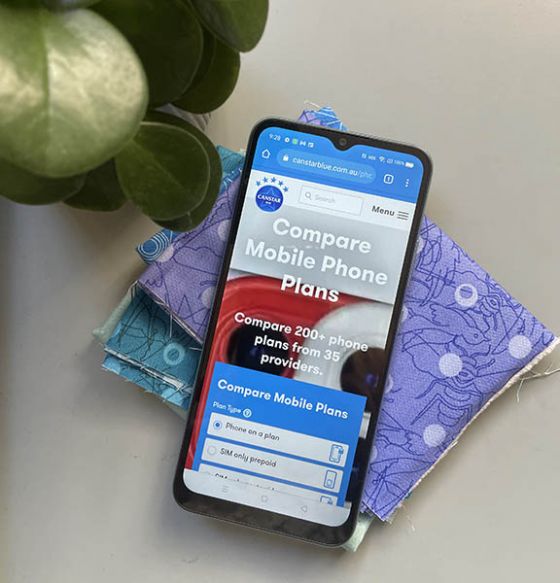 For $199, you can expect that the Realme C21 will not perform quite as well as a phone over $1,000 or even around $300-$400. However, I was surprised by the performance of the Realme C21. While it was slow to load at times (particularly loading pictures and videos on websites and on social media, with a little bit of that delayed ‘jumpy’ scrolling), it wasn’t particularly frustrating and at times seemed to scroll and load rather quickly considering my expectations.

Navigating between apps can also test a cheaper processor’s ability, but I found it was rather quick to navigate between apps. Changing between video quality caused a little lag in loading, and it was also slow to load typing at times, but it didn’t happen frequently enough for it to be a hindrance to usage.

The camera app suffered from some slow processing and reactions, not registering when I pressed the shutter button after taking a photo, and taking several taps to finally be able to take the next photo. This could be from slow processing of photos, but it was hard to tell. It also seemed to struggle registering when I was adjusting the beautification slider in portrait mode. While this was a little frustrating, it wasn’t too bad, and as long as you don’t need to take photos in quick succession, it’s unlikely you’ll notice it.

As for the battery, the C21 includes a rather big 5,000mAh battery with reverse charging capability and a super power saving mode. I found it’s a fairly long-lasting battery, with it only draining around 10% of battery after six and a half hours of moderate usage (social media, video, web searching and idle periods), while watching HD video for around one hour and 20 minutes drained 8% of battery. Charging is rather slow, as to be expected, requiring around three hours to charge from 0% to 100%.

While there is standard power saving, the super power saving mode is next level — it essentially shuts down most of your phone’s functions including the background, lowers the brightness and limits you to using three apps of your choosing (in addition to call, message and clock functions). When you switch it on, it tells you how much longer the phone can last in the mode. With 29% battery remaining, the phone was telling me that there was an estimated eight hours 53 minutes left on power saving mode, while super power saving mode shows 13 hours and 31 minutes.

The auto brightness was a little temperamental at times, struggling to find the right brightness for the environment or being too slow or too quick to adjust. The screen is clear and vibrant and provides a great viewing experience. HD videos looked fantastic with the clear screen, but were let down by disappointing speaker quality. However, this is pretty much to be expected from a phone at this price. 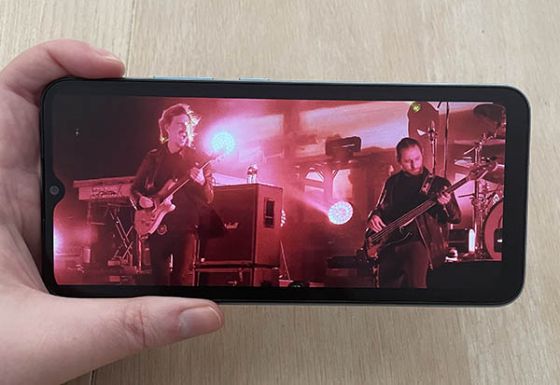 There is basically no depth or bass, making music sound a little flat. Because of the speaker placement on the back of the phone, the audio suffers even more from muffled sound if you’re lying your phone down on a table or other surface while listening to music or watching video. While this won’t be a problem if you mostly use headphones, it’s still a bit disappointing. Although I don’t particularly mind the back placement of the speaker, in real world use, it just didn’t really work at times and let the phone down somewhat.

The Realme C21 comes with a triple rear camera setup with 13MP main, 2MP B&W and 2MP macro lenses, plus a 5MP front-facing camera. As you’d expect for a phone at this price point, the camera setup is quite basic; you won’t get the best camera performance on the market, but it does a decent job at the basics.

Outdoor photography is a stand out from the Realme C21, but the interesting thing is that Realme seems to boost colours a lot more than other devices. While it does make for some really nice and vibrant photos, it does make the pictures look a little artificial and lack a bit of depth. Using pinch to zoom for taking photos is very difficult, as it’s quite slow to react or register the pinching motion. You’ll also get panorama, HDR photos and a Chroma boost function, although Chroma boost seemed to saturate images more or provide little difference in colour correction.

This colour boost however does improve indoor photography, especially low-light photos where you do get more of the colour coming through than on other cheaper devices. However, low-light photos, even in night mode, do tend to come out rather grainy, and it’s hard to get a result that isn’t blurry. One thing that I liked was that there was a count down when using night mode, so you knew how long to hold the phone still while it processed the photo.

Macro shots are also a little artificial looking with a slightly digitally pixelated quality. While you could pick up some good detail, it struggled to get the lighting right, and the balance of colours could be a little off, especially indoor macro photos.

Video is fairly simple, with options to screenshot while filming or to pause filming without ending the recording. Zoom is a little jumpy and slow to react when pinching the screen to zoom in and out, while zooming in produces a rather grainy result. You’ll also get time lapse and slow motion video functions included.

All in all, the Realme C21 has a decent camera setup that will do the basics for you. A slow to react and slightly laggy app functionality does let down the experience of taking photos slightly. However, for the price, you’ll get a phone that does a rather good job at the basics and you’ll be able to take some decent photos, with a few additional photography features included.

Should I buy the Realme C21?

While Realme is still a brand many might not be too familiar with, one thing it does really well is producing quality phones at affordable prices. If you’re in the market for a cheap sub-$200 phone, whether it’s for yourself or you’re looking for a good phone for kids, the Realme C21 is definitely worth considering.

You can expect a decent performance for the price point and a phone that doesn’t look or feel like it is under $200. While you may experience issues like slower performance and lesser-quality camera setup, it does a good job at the basics and manages well with day-to-day tasks. There wasn’t particularly anything in the performance that I felt hindered usage, or frustrated me enough to impact my experience with the C21.

Overall, Realme has proven that it is leading the way when it comes to packing value into cheaper devices. Thanks to its ongoing dedication to making technology more affordable to Aussies, if you’re looking for a super cheap smartphone, you might want to take a look at the Realme C21.

If you like the sound of the Realme C21, this phone is exclusive to Optus prepaid. This means you’ll pay for the $199 phone upfront and you’ll have an Optus prepaid SIM card with free $30 recharge included. If you wish to switch phone plans, you may need to check if your Optus phone is unlocked. If it is locked to the Optus network, you may need to pay a fee to unlock the phone.

To compare how Optus prepaid plans compare to other prepaid plans on the market, the following table shows a selection of prepaid plans from Canstar Blue’s database for $40 or under, listed in order of standard cost, lowest to highest, then by data allowance, largest to smallest. If you want to compare a larger range of offers from other providers, use our phone plan comparison tool. This table includes products with links to referral partners.

Product used for review/testing was a free sample provided by Realme.