Fitbit is one of several brands that have become synonymous with the deluge of fitness tracking hardware currently stacking the shelves of retailers nationwide. The San Francisco-based company now offers seven different activity trackers, following the recent announcement of its latest model, the Fitbit Blaze. Fitbit also sells a smart scale called the Aria, which works in tandem with its other products.

Fitbit’s impressive products range from a tiny clip-on tracker to a full-blown touchscreen watch. So what are your extra dollars getting you when you shell out for a more expensive device? Here is a guide to Fitbit’s products and how much they will cost you.

The entry-level Fitbit model is the Zip – a small, clip-on tracker with an LCD screen that fits in the palm of your hand. The Zip is a simple, long-term fitness solution for those who aren’t too fussed by lots of complicated functions. It tracks your steps, distance covered and calories burned, with a tap of the screen allowing you to view all of these stats (as well as the time!).

All that information can be wirelessly synchronized with the Fitbit application on your smartphone or laptop, and from there you can easily see graphs of how you’ve progressed over the previous weeks and months. It’s water-resistant, clips onto just about any part of your clothing, and the replaceable battery lasts for a whopping six months – plenty of time to ingrain a new habit for exercise! Starting from $79.95, it’s a great activity tracker for those who are just beginning to exercise regularly.

The next step up from the Zip is the Fitbit One, which introduces several more features for some extra depth to your activity tracking. It resembles a large USB storage stick, complete with an OLED display on the top that lets you view all of your fitness data.

The Fitbit One adds sleep measuring to the existing stable of movement tracking capabilities. Inserting the device into an included wristband lets it track both the duration and quality of your rest, and it can be set to wake you with a silent vibrating alarm. The One still comes with all the clip-on convenience and durability of the Zip when out and about, but the rechargeable battery’s life is now around 10 days. The One will cost you $129.95 – a significant increase of fifty bucks compared to the Zip, but well worth it considering what it can do.

If the One doesn’t quite do it for you, then maybe a proper wristband is more your style. The Fitbit Flex is probably the company’s most iconic product – a small, light wristband which holds a tiny activity tracker that can be swapped between bands and plugged into your computer. The Flex performs the same functions as the One, and is even priced the same at $129.95. The main difference comes in the Flex wristband, which comes in a bunch of different colours and has a band of five LED lights which progressively light up as you make progress towards your daily goal.

A further upgrade on the Flex is the Fitbit Charge, a slightly larger wristband with integrated electronics and a small OLED screen. The Charge’s improved tracking capabilities allow you to record the number of floors you’ve climbed, and its inbuilt screen lets you see the time, daily activity progress and even caller ID notifications when connected to your phone. As with all the previous models, the Charge can synchronise wirelessly with your phone or laptop so you can access all of your data on the Fitbit app.

If you’re really getting serious about your workouts and want to track your training zones and overall health, you’d best get your hands on the Charge HR. This model adds in a continuous heart rate monitor on the underside of the Charge wristband, allowing you to monitor your exertion during workouts, measure your resting and passive heart rate, and just generally see how active you are throughout the day. The Charge sells for $179.95 and the Charge HR for $229.95. But like all of the products on this list, make sure you shop around because you might find some retailers selling them cheaper.

The final Fitbit models are the big guns for serious fitness enthusiasts – the newly-announced Fitbit Blaze and the top-of-the-line Fitbit Surge. The Blaze is a full-colour touchscreen device with similar capabilities to a smartwatch. It includes all the technology found in the Charge HR and adds automatic exercise recognition for a variety of sports, text and call notifications and even music controls for your smartphone. Whilst it hasn’t yet hit retail shelves, you can bet it’ll be a powerful tool for keeping your activity monitored.

The ultimate Fitbit product, the Surge, consists of an OLED screen and includes full GPS position tracking in addition to all the aforementioned features. The Blaze boasts up to five days of battery life, whilst the Surge extends this to over seven days – not bad compared to most modern smartwatches. The Blaze and Surge retail for $329.95 and $399.95 respectively – although once again, you may find some retailers selling them for significantly less.

A comparison of high-end smartwatches 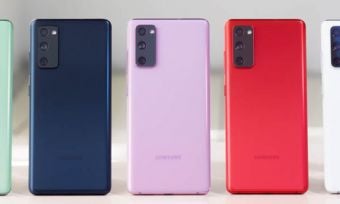 Optus sale: Save big on select OPPO and Samsung devices