First announced back in April, the Edge is Motorola’s latest flagship device, offering premium specs and features in a 5G-ready package. If you’ve been looking for a 5G-capable smartphone that’s more affordable than high-end devices, and that offers an immersive mobile entertainment experience, the Edge could be a shoo-in for your shortlist.

With a huge 6.7-inch ‘Endless Edge’ display, the Edge is designed for viewing, gaming, and smooth scrolling. The curved display wraps nearly 90 degrees around both sides of your device, and comes with a 90Hz refresh rate.

In addition to a vibrant screen, the Edge launches with award-winning Waves audio processing technology, offering an enhanced experience when listening to music, watching video, or even taking a phone call. The included stereo speakers offer what Motorola states is ‘the highest audio output ever’ on a smartphone, and the handset comes with optimised playback through both loudspeakers and headphones. 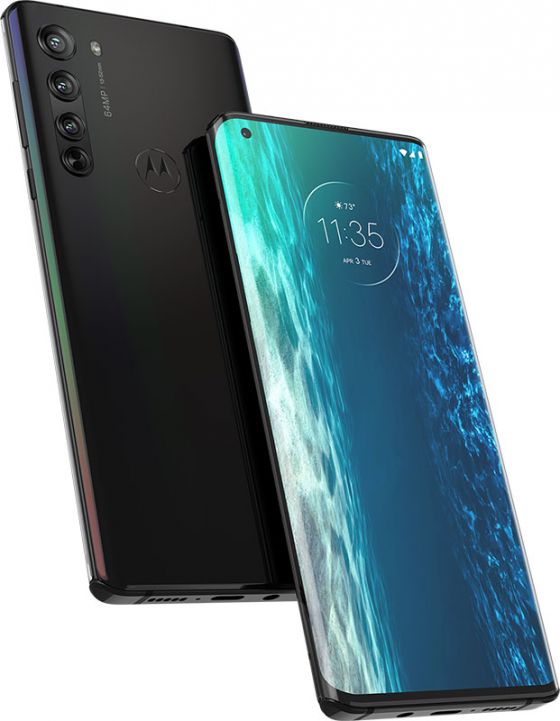 Camera-wise, the Edge includes a triple camera setup in the rear, plus a 25-megapixel sensor in front. The main 64-megapixel rear camera offers great resolution for a sub-$1000 smartphone: combine this the with 8-megapixel telephoto and 16-megapixel wide-angle Macro Vision lenses, and you’ll get crisp and full-length shots in a variety of conditions, including night and low-light. The Edge also comes with advanced camera features and software, including Long Exposure, Night Vision, Portrait Mode and Smart Composition.

The Edge is powered by a 4,500mAh battery compatible with fast 15W TurboPower charging. Motorola claims this can give you up to two full days of power, though heavy users will likely need a power top-up at the end of the day. The Edge also runs a streamlined version of Android 10, features a Qualcomm Snapdragon 765 octa-core processor, and comes with 128GB of storage (plus up to 1TB expandable storage via microSD card) and 6GB of RAM.

A quick list of the Motorola Edge’s key features and specs is below.

The big downside to the Edge is that it’s not available on plans from any Australian telco. This means that you’ll need to pony up the $999 RRP outright to buy an unlocked version from Motorola, or from JB Hi-Fi, The Good Guys, Mobileciti and Officeworks.

While this is still cheaper than competing 5G smartphones, such as the Galaxy S20 series, it also puts the Edge’s price on par with the newly-released OPPO Find X2 Neo, another 5G-ready Android phone. The X2 Neo is also priced at $999, but unlike the Edge is available on plans from both Telstra and Woolworths Mobile – meaning you can spread the cost of your device out over 24 or 36 months of payments.

The LG Velvet is another recently-announced 5G smartphone with a mid-high price tag – $899 upfront. It’s also set to land on plans from at least one major Australian telco, so customers keen on 5G may want to wait to compare what’s on offer before dropping cash on the Edge upfront.

If you do decide to pick up the Edge, Motorola is currently throwing in a free pair of Motorola VerveBuds 110 true wireless headphones with every purchase. You can redeem your VerveBuds with proof of purchase at Motorola.com.au.

If you have the money to spend, and want an unlocked phone and no commitment, the Edge is likely to be a great 5G device. You’ll need to pair your phone with a SIM-only plan, such as those listed below – however, keep in mind that 5G mobile coverage is currently only available on plans from Telstra and Optus, and only in selected areas.