There are a few famous duos we can rely on to satisfy our hunger cravings, like cookies & milk and Bunnings & snags ─ although there is no greater pair than fries and… well, pretty much any takeout food. Even a sweet soft serve can become extra finger lickin’ good when it’s accompanied by a small bag of salty fries, and a soft drink to wash it all down, although ‘treating yourself’ to fast food can sometimes leave your wallet a little skinny.

So, how much should you spend on fast food? We reveal how much Aussies fork out on average per month at popular takeaway chains, as well as by state and age group. 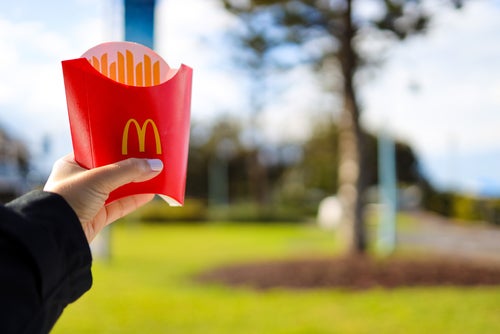 Australians spend an average of $60 on fast food per month, according to Canstar Blue’s latest survey of quick service restaurants. That’s $720 per year! For comparison, it’s more than what we found people spend per month at a pizza store ($41) and when ordering from restaurant meal delivery apps ($44) in the same period.

McDonald’s, Hungry Jack’s and KFC are the cheapest fast food chains in Australia, by average monthly spend, with Aussies paying no more than $70 a month to eat on the cheap (or $840 per year), according to our survey. Meanwhile, Guzman y Gomez and Oporto are at the more exxy end of the scale, with customers shelling out over $90 per month to eat some premium Mexican or fresh grilled chicken. That’s equal to $1,080 per year or the cost of a holiday!

This table shows the average monthly spend by fast food chain, based on a Canstar Blue survey of more than 2,200 people.

Tasmanians are the biggest spenders on fast food, setting aside $66 on average for takeaway each month ─ equal to almost a whopping $800 per year! To balance it out, the nation’s capital also had the largest percentage of people searching for ‘healthier’ menu options (36%), according to our survey.

Queenslanders were second in line, totalling a slightly smaller figure of $62 per month, followed by New South Wales on a monthly average fast food spend of $61. Victorians and Western Australians both showed an average of $57 per month, equating to $684 annually, while South Australians spent just $51 in the same period (or $612 per year).

This table displays the average fast food monthly spend by state, based on a Canstar Blue survey of more than 2,200 people.

Our research found that Millennials and Gen Z tend to spend more on fast food per month than older Australians. Those between 18-29 years of age fork out an average of $81 per month on takeout, meanwhile people aged 70 and over only spend about $31 per month on fast food.

This table shows the average fast food monthly spend by age group, based on a Canstar Blue survey of more than 2,200 people. 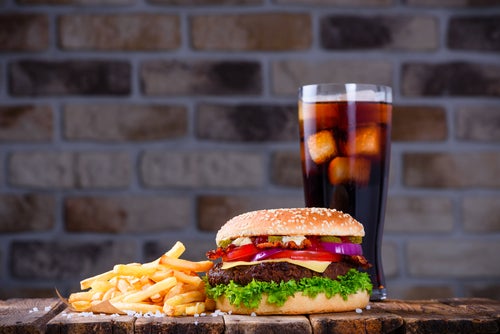 How much does fast food cost in Australia?

Here is a comparison of basic menu items from several fast food chains. Keep in mind that product availability and prices may vary between stores.

Obsessed with fries? Who isn’t! Below we compare prices for fries from different takeaway chains. Note this list doesn’t include ‘loaded chips’.

Who doesn’t ‘clucking’ love chicken nuggets? Check out the prices below to see how much a quick fix can cost. This list includes standard chicken nuggets, not items such as KFC’s Original Tenders or Hot Bites from Grill’d.

How much do we need to fork out for a soft drink? Here’s a list of prices.

4 ways to save money on takeaway 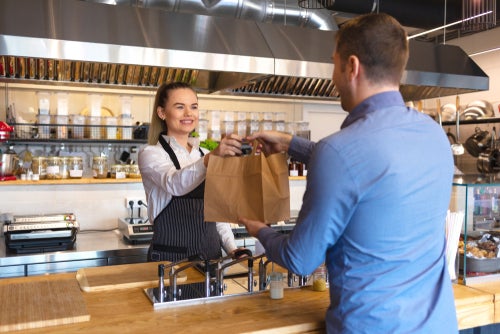 There are easy ways to score a cheap feed, aside from ordering a ‘meal deal’. We’ve listed some below:

Many takeout chains such as KFC and Hungry Jack’s provide app-exclusive offers, plus a rewards program, similar to Flybuys and Woolworths’ Everyday rewards, which lets you earn points with every purchase and exchange these for a delicious deal. The MyMaccas app from McDonald’s, for example, has a virtual ‘punch card’ which lets you snag a free beverage when you stamp in five McCafé drinks.

There’s a plethora of discounts out there, thanks to many restaurants now partnering with various food and drink discount apps. It can be especially handy when you’re looking for a cheap feed but don’t want the same burger and fries.

Cashback websites like Shopback and Cashrewards essentially ‘reward’ customers by returning a portion of their purchases when they buy from partner retailers. You can usually claim these online or in-store. Keep in mind that various sites work differently.

Ordering from a restaurant delivery service like Uber Eats can certainly be convenient, plus offer great deals like free delivery ─ especially when you’re a new user. But keep in mind that the prices of specific dishes may be more expensive through these services compared to when you’re purchasing in-store or through the fast food chain’s official app. 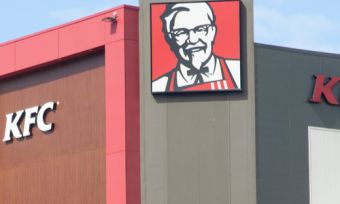 “At least Domino’s hasn’t run out of pizza”: KFC customers complain as stores run low on chicken due to supply crisis