Patches and emblems are synonymous with motorcycle clubs all over Australia and the world; here are some you may have come across in your travels. 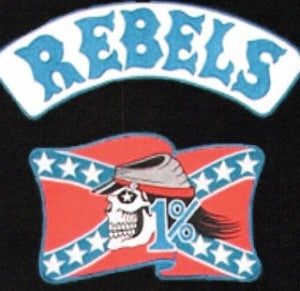 We begin in Brisbane, where the Rebels motorcycle club was formed in 1969. The confederate flag that forms their insignia represents the club’s original name, Confederates.

The biggest club in the country completes their insignia with a skull wearing a cap, and 1% character in the centre of the flag.

The Rebels have chapters throughout Australia, as well as a presence in northern New Zealand, Germany, Italy, and Spain. 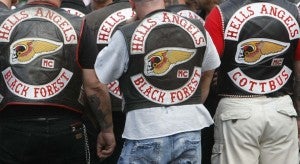 Originally founded in the Fontana/San Bernardino area in the United States, they now have clubs across the world, including in Australia.

Here, they have 10 active chapters, covering most states, with the exception of Western Australia and Tasmania.

Their emblem is the profile of a skull with red and gold angel wings, and a black and red motorcycle helmet. Above that is Hells Angels in red lettering on a curved white patch.

Varying on each symbol is the name of the chapter. To distinguish where members are from, their home club is included on their jacket in the same lettering as before. 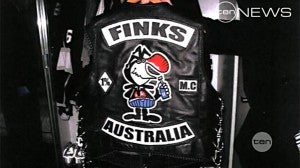 Founded in Adelaide in 1969, the name comes from comic strip, The Wizard of Id.

The name itself comes from a line often said by characters in the comic, “the King is a fink”, while their logo is the court jester of the series, Bung. To distinguish state chapters, the colour of the jester’s pants changes.

Above the jester is the name of the club, while underneath can be either the chapter of the club, or the country that the member resides in.

In 2013 many members of The Finks joined the US-founded Mongols, however it appears that the club has regrouped over the past two years.

The group hails from Texas and the Australian chapter was formed there in the 80s, roughly tqo decades after the initial formation of the group.

There are chapters throughout the eastern states of Australia, which have followed on from the first group in Sydney.

Internationally they have members in Canada, Scandinavia, and Europe.

Their flag is a pot-bellied man in a sombrero, gun in one hand and a sword in the other.

Above him is the club name, and below is the chapter of the club; to the left is a 1% symbol, while on the right are the letters MC. The story of the Bandidos formation in Australia, as a result of a falling out with the Comanchero MC was dramatized in the movie Bikie Wars: Brothers in Arms

Taking their name from the famous Emperor Genghis Khan, the club was formed in the 70s in California.

Their emblem is a muscular Mongolian man on a motorcycle, with Mongols above him. Like many clubs, the location or chapter of the individual member’s club is included on their jacket, underneath the image of the man on the motorcycle.

Unlike other clubs, there is no colour included in the patches; they are simply black and white.

Symbolised by a silver and gold phoenix, this club comes from Sydney, and was formed in 1968.

The phoenix is on a red background, with gold lettering above and below, naming the club and the chapter respectively.

This is a club that started in Perth, before expanding into Norway and the USA.

A maroon skull with horns and golden wings is their flag, with the club name above and the country below, all in white lettering.

Established in 1935, the Outlaws are the oldest club on this list. 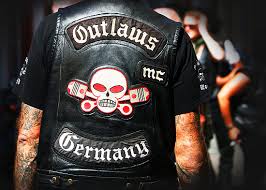 To top that off, they are also one of the largest, with chapters in America, Australia and New Zealand, Europe, and even Japan and Montenegro.

Their patch is a white and red skull, with motorcycle pats forming crossbones behind it. The name and chapter of the club are included in a similar fashion to other clubs.