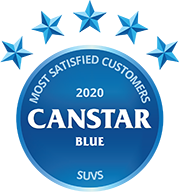 Picking a new car for yourself can be hard enough, but finding the right one for your family adds an extra element to the decision-making process. To help you along the way, we’ve once again surveyed nearly 1,000 Australian drivers for their feedback on the new SUV they’ve bought from a dealership in the last three years.

This year, BMW swerved Mazda off its two-year winning streak, becoming the new best-rated car brand for SUVs. It earned five-star reviews in most categories, including reliability, car servicing, point of sale service, after sale service, value for money and overall satisfaction. 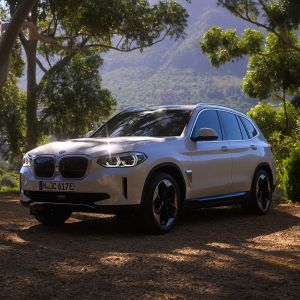 Here are the best SUV brands in Australia, as rated by consumers in Canstar Blue’s latest review:

BMW has bumped consecutive winner Mazda off the top spot, after being the only brand to earn a five-star review for overall customer satisfaction. Most other car makers pumped the breaks on four stars for overall satisfaction, except for Ford which packed up on three stars.

Notably, Subaru edged out our rating’s winner on driving experience, rated the best in that category. It also got five stars for reliability, along with Holden, Hyundai, Mitsubishi and Mazda, with the latter additionally getting full marks for point of sale service. Along with the main prize, BMW was also number one for after sale service, car servicing and value for money.

Take a look at the brands below to see what’s on offer in the SUV market.

German car manufacturer BMW offers one of the most popular luxury line-ups. It has several SUV collections, including the ‘X’, ‘M’, ‘BMW i’ and ‘PHEV’ ranges. The ‘X’ series offers the most variety and features the latest addition to the family ─ the BMW iX3. Set for release in 2021, it’s the brand’s first all-electric SUV model and is designed to drive up to 460km and provide a maximum charge of 150kW. A plug-in hybrid is alternatively available with the BMW X5, in addition to the regular diesel or petrol models.

South Korean brand Hyundai seems to be going from strength to strength in the new car market. The company recently expanded its SUV line-up to include the Venue range, which is available in three different varieties. If you love to travel, this new addition comes with an Active Traction Mode to make the vehicle more ‘grippy’ when driving on ‘loose and shifting driving conditions’ such as mud, sand, and snow. Other SUVs from Hyundai include the Kona, Tucson and Santa Fe.

Best-known for its small car range, South Korean brand Kia has recently entered the SUV market to give motorists something else to look forward to. Its SUV range currently contains the compact KIA Seltos, the medium-sized Kia Sportage and the large Kia Sorento.

These come with a few cool features, especially when it comes to safety. This includes the Blind Spot Detection and Lane Change Assist functions, which use sensors to detect vehicles approaching from behind and warn the driver through visual alerts on the side mirror. There are also other features designed to help the car semi-automatically park, and prevent collisions (or at least minimise the impact) by applying the brakes.

Mazda is one of the go-to options for motorists when it comes to finding a new ride to drive off the lot. The Japanese manufacturer’s SUV line-up consists of the popular CX series, including the small CX-3, medium CX-5, and the larger CX-8 and CX-9 models, giving motorists plenty of options regardless of how much space you need. One of the latest SUVs is Mazda’s CX-30. Available as either a front-wheel or all-wheel drive, it comes with a few nifty features such as 360◦ view monitor, Active Driving Display, dual-zone climate control and a Bose sound system.

Another German luxury car brand that offers a fairly extensive SUV range, Audi’s Q range includes small and larger SUV models for motorists to choose from. If you’re looking for something with a bit more grunt to it, the ‘S’ range may set your heart racing but is only available on select models. Similarly, if you’re after an environmentally-friendly model, the Audi e-tron may be the ride for you.

Offering plenty to choose from in the SUV market, Japanese brand Nissan’s models include the smaller Juke, medium-sized Qashqai and X-Trail, as well as the larger Pathfinder models for those who need a bit of extra boot space.

Certain models, including the Ti from the Qashqai series, come with exclusive features, such as intelligent cruise control and rear cross-traffic alerts to help prevent collisions with vehicles or pedestrians when reversing.

With the Subaru Forester and Outback models popular in the SUV market, the Japanese manufacturer’s recent addition of the ‘XV’ has added a sleeker style to the range. The new Subaru XV comes with a few useful features, including EyeSight Driver Assist which uses forward-facing cameras on the windscreen to scan the road for potential dangers. It also contains Auto Stop Start technology that’s claimed to help save fuel by stopping the engine when you don’t need it.

Whether you’re looking for an SUV to accommodate a growing family, or just simply need enough room to store your road trip essentials, Mitsubishi has a few models to choose from. There’s the Outlander, Outlander PHEV, ASX, Eclipse Cross, Pajero, Pajero Sport and the Triton 4X4.

The Japanese carmaker has also recently pushed more PHEV (plug-in hybrid electric vehicle) models into its range, making the brand worth looking into if you’re after an environmentally-friendly alternative.

Holden has one of the larger car line-ups available for Aussie motorists, although its SUV range comprises of just two models. For families that need plenty of space and love road trips, the CR-V is labelled as the go-to option. Alternatively, there’s the HR-V for people who prefer to explore the urban jungle.

According to the brand, the HR-V might be the most versatile. Some features include LaneWatch, a multi-angle reversing camera and the City-Brake Active System.

Toyota may be known for its larger vehicles, like the popular LandCruiser and Prado models, but it also has a couple of compact alternatives like the Yaris Cross and C-HR. Sizing down is particularly ideal for those who need plenty of space, but don’t want to take charge of a bulky vehicle.

For a family-friendly SUV, Toyota has designed the Kluger, RAV4 and the seven-seater Fortuner. But for something with a little more grunt, the C-HR, LandCruiser and Prado are said to suit both in town and off-road driving.

Honda’s short but sweet range of SUVs includes the HR-V and CR-V. For those who don’t want to commit to the larger SUV, the HR-V is the brand’s 2WD vehicle. Despite being the compact alternative, its Magic Seats function lets you unfold the seats 18 different ways to maximise space inside. Alternatively, there’s the CR-V. It comes with five or seven seats, depending on the particular model, 522L worth of boot space, and doors that open to a 90° angle to help with loading and unloading.

Ford has plenty of SUVs available for motorists to choose from, including the Puma, Escape, Endura and Everest. While it seems that there are currently no plans on the horizon to expand the range, those after an SUV still have a good variety to consider, whether you’re after a smaller ride or something with a bit more legroom.

Should I buy an SUV?

Did you know Aussies fork out around $41,697 on new SUVs, driving up the average amount spent since last year? Despite the extra costs, it’s clear many Aussies are still wheelie happy to hand over their hard-earned cash. The majority of owners (88%) believe they got a good deal on the price of their new car, with most survey respondents (84%) also having researched their car online beforehand or negotiated a lower price with their dealer.

So, what makes consumers so revved up for SUVs? One reason is that they’re particularly ideal for motorists who want plenty of cargo space and legroom, but don’t want to go for a larger 4WD option, with plenty of small and mid-size options available, making them suitable for both long car trips as well as short dashes through the city.

With plenty of car manufacturers now jumping on the SUV bandwagon, as well as offering electric or hybrid models, Aussie motorists are becoming increasingly spoilt for choice. As a result, which SUV you decide to call your own will come down to your individual preferences, your driving habits and of course your budget. That’s why it’s important to shop around and test drive different types of models to make sure you’ve got the best vehicle for you.

Canstar Blue surveyed 12,000 Australian adults across a range of categories to measure and track customer satisfaction, via ISO 26362 accredited research panels managed by Qualtrics. The outcomes reported are the results from customers within the survey group who have bought a brand new SUV from a dealership in the last three years – in this case, 987 people. 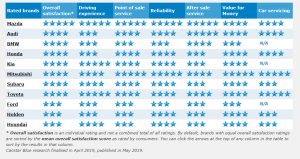