Cyberpunk 2077 is one of 2020’s most anticipated games, promising a massive dystopian sci-fi adventure to the beat of the 80s and giving you massive control over the story by putting you in the driver’s seat. You get to make the tough decisions in this world, and play out a dark narrative surrounding powerful corporations with Blade Runner vibes. All this said, the game is super buggy, and might be more tedious than immersive, writes Zachariah Kelly.

Cyberpunk 2077: Sci-Fi dystopia from the makers of The Witcher

The developers of Cyberpunk 2077 have a reputation to uphold. CD Projekt Red are the developers of the award winning Witcher series, including The Witcher 3: Wild Hunt in 2014, a game widely known as one of the best RPGs of the decade. That’s the last RPG the studio put out before Cyberpunk 2077, and one hell of a title to live up to.

For the most part, Cyberpunk 2077 does its own thing – obviously borrowing elements from The Witcher 3 in being a roleplaying game with a deep, choice-based story, although some of the choices you make in-game often don’t feel as dynamic as in the previously released title. That’s not to say the game isn’t good in its own right – the combat is fun, the vehicles are enjoyable to drive, and fleshing your character build out is done well, and gives you a fun, intricate progression system.

Let it be said though that, in its current form, Cyberpunk 2077 is plagued with bugs. As of publication, the game is almost unplayable on PS4 and Xbox One consoles due to lag, and on other platforms, environmental, vehicle, gameplay and game-breaking bugs are wide ranging. Just be aware that Cyberpunk 2077 isn’t in its best form right now, although the developers are working to fix this. This game was reviewed on PC. 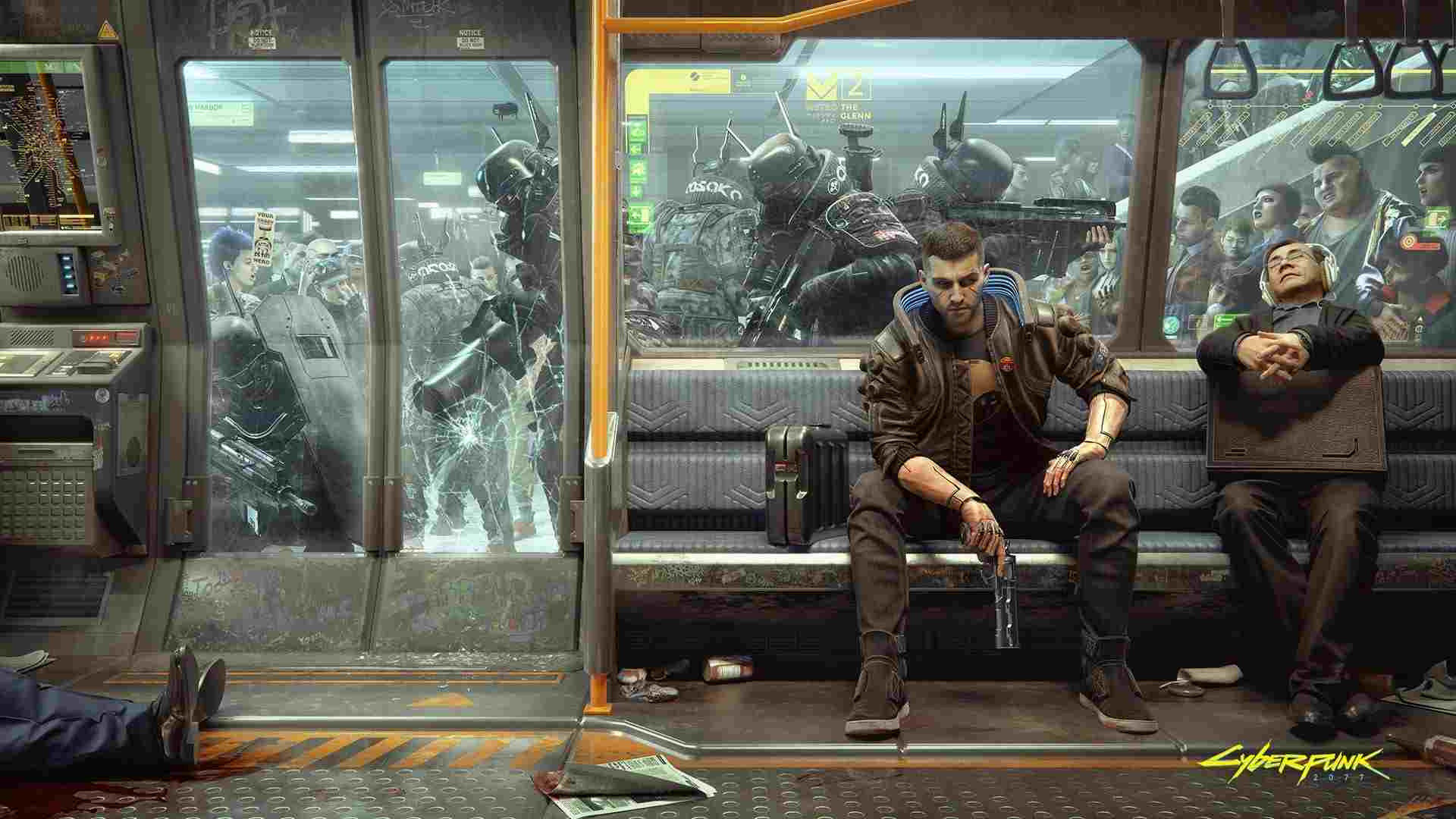 Visit the Xbox store for Xbox and PC games

Cyberpunk 2077 is available on most platforms, including modern Xbox consoles and PCs. You can purchase it on the Xbox store through the link below, although it’s worth considering picking up the Xbox Game Pass, or the Game Pass for PC. With your first month only costing $1, you get access to over 100 games in the Game Pass library. There’s so much to play, all for a subscription service price.

The story: So much to absorb and not much to say

Cyberpunk 2077’s story claims it has a lot to say, building up some interesting narratives, but then tends to fizzle out a lot of the time before having its deep and meaningful elements explored too deeply – which is a shame, as the opening act of the game feels very strong, but it doesn’t seem to keep up the momentum. It uses the typical dystopian themes, often reflecting on the modern day, overconsumption and ideas of corporations having major control over the world, as a backdrop to what often feels like an action game, rather than an RPG. In my experience – and having completed the main story, several of the side missions, and over 60 hours of gameplay – there certainly were points where the story shines and is quite interesting, though some of the interesting elements don’t feel explored enough for an RPG trying to be thought-provoking.

Those broader themes really are the overtones of what is essentially a beat-for-beat Hollywood adventure – definitely relying on Blade Runner and Strange Days vibes. You play as V, a mercenary looking for big scores in the futuristic setting of Night City. Before the game starts, you can customise most of V’s appearance. Be warned though, as you won’t get this opportunity again (except for with clothes).

One big score leads to another and you’re thrust into dealings within Night City’s vicious underbelly. You make choices along the way, which change the outcomes and gameplay of scenes, although these choices vary greatly – sometimes a dialogue choice will have little to no impact, sometimes it means the life and death of a key character. It’s a decision rollercoaster. 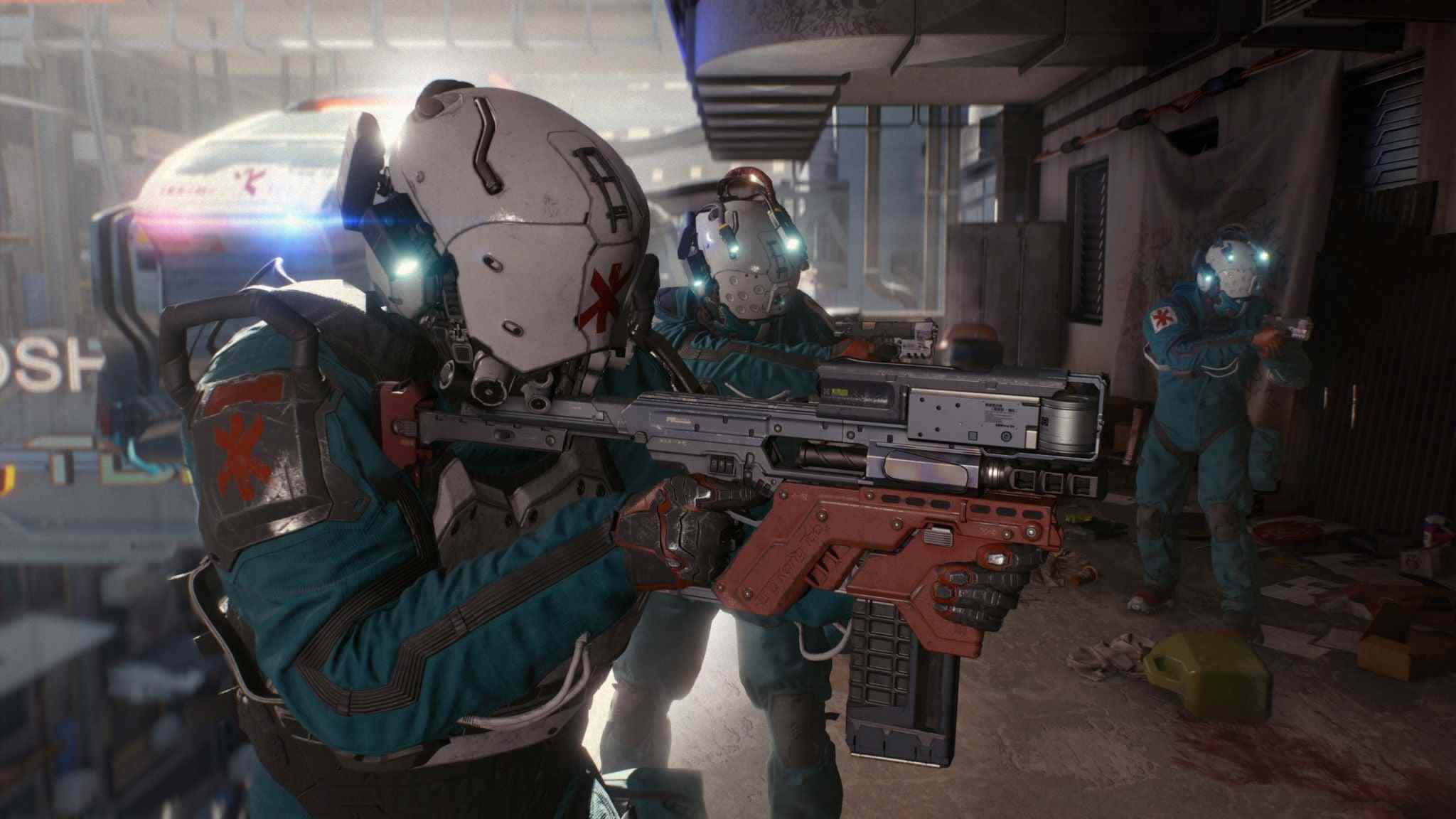 The game centres in the fictional city of Night City, a city in NorCal, or Northern California, long after an economic collapse in the USA (or, the New United States of America). This city is huge, and even areas you revisit feel somewhat new as you go back to them. It’s pretty, vast and dense with things to do. Travelling out to the east of the map will take you out of the city, into desert regions of Northern California, where Nomad groups roam. Even where there’s nothing but sand, the game feels filled with content.

Aesthetically the game fully commits to its Cyberpunk themes – and how could it not? Really for much of the experience the game uses neon lights and flesh spliced with metal as its colourful background, and the world follows through with this. Most of the sidequests are “gigs”, small single-location based mini-quests where you have to fetch data from a laptop or eliminate a target. Bigger side-quest chains feel more rewarding, and definitely add to your character’s adventure through this world that’s ended long before you’ve arrived. 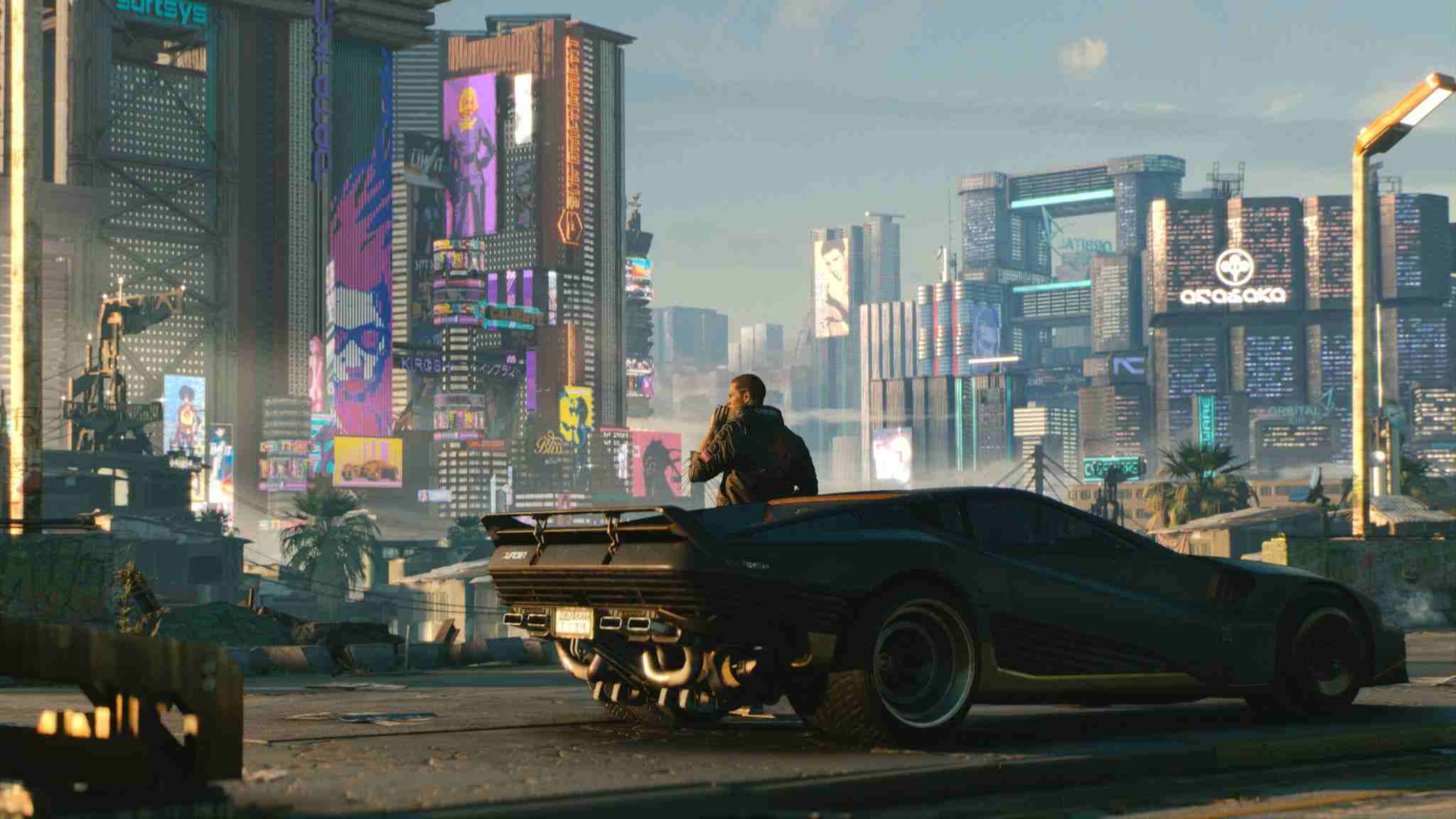 The gameplay: Play this dystopian fantasy out your way

Cyberpunk 2077’s gameplay is action packed and deep, catering to players of all types, be them lead-slinging or stealthy. The skill trees and progression system in this game, along with how gear and weapons work, let you really play in your own way. There’s pistols, rifles, melee weapons, and with all of these you have the option to never take a life (and instead go for flesh wounds and knockouts).

There’s cyberware upgrades to give yourself, and also lots of hacking, including a “quick hacking” system to use on enemies that lets you disable enemy legs, eyes, or even fry their brains.

By midway through the game you’re getting skill points very slowly, which means you’ll need to be investing in a specific build. A jack-of-all-trades approach doesn’t work a lot of the time, so you’ll need to make a choice for every level. Should you invest in your charisma (dubbed “Cool”)? What about your weapon skills or your intelligence? It all comes down to how you want V to work in this world.

The driving is also fun, and so far the missions have been enjoyable to plan out and think about. Using stealth is a tonne of fun, although you can just enter an area guns blazing and win. Going for a specific build has its own rewards. 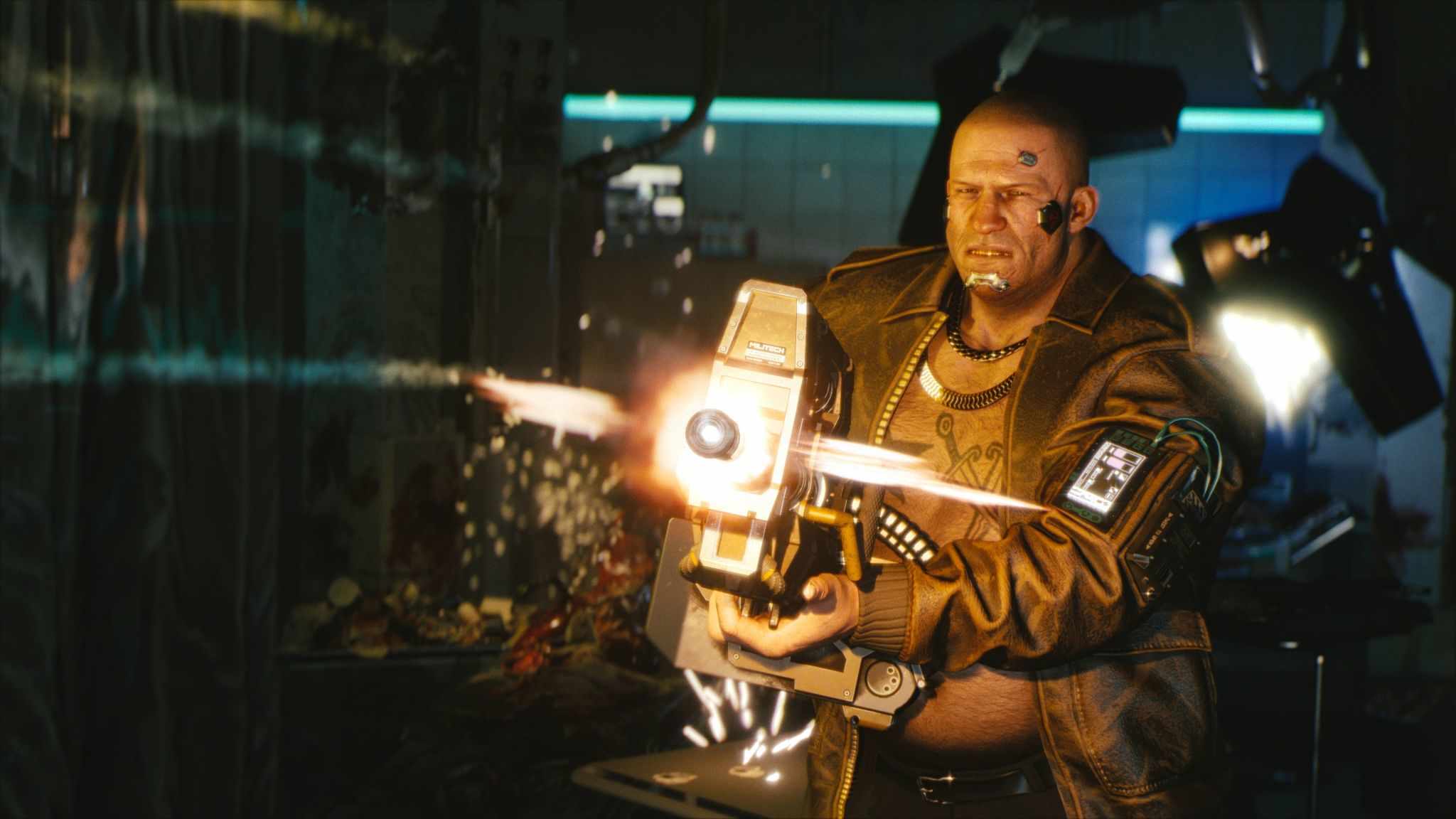 I recommend Cyberpunk 2077 – but don’t recommend purchasing it in its current state on the PlayStation 4 and Xbox One consoles. In its current form on other devices it’s quite buggy and glitchy, albeit more playable. Whether or not you’re playing on a previous generation console, it might be worth waiting a month or two for patches to be rolled out, as bugs are rampant on all devices.

You can buy Cyberpunk 2077 digitally on the Xbox One, Xbox Series X|S, PlayStation 4, PlayStation 5, on the Epic Games Store, on Steam, or on GOG Galaxy. Physical editions for consoles are also available and prices range between $69 and $99 for standard editions, depending on the store.

Love gaming? Get an NBN plan to match your hobby

Cyberpunk 2077 is a huge game – so huge in fact that it’s 102GB on PlayStation devices, and a solid 59GB on other systems (pre-patch). That’s a lot of gigabytes, and a lot of time to throw at a download. So, you should consider getting an NBN plan that suits your internet needs – we’ve listed a bunch below across various price points and speeds.