Is there anything Kmart can’t do? The cult department store recently launched its own Anko range of big-ticket appliances and white goods and now it’s selling a thermal cooker that comes with touch controls, multiple cooking functions, and a QR code with access to over 150 recipes! Yes, it’s very high-tech for a budget buy with a $99 price tag, but is it worth it? Here is our expert review. 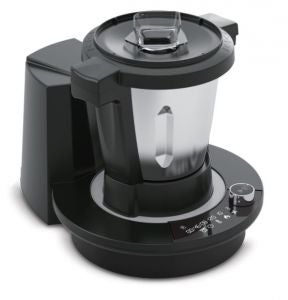 Kmart’s thermal cooker can be described as a great machine with a great price. It was designed with convenience in mind for both novice and seasoned cooks but not for size. It only comes with a small 2.3L capacity which isn’t huge and may not be enough if you’re cooking for a family and it has a limited temperature range of 37°C-120°C. It does however boast some nifty specs including 13 pre-set functions to cook, steam, sauté, knead, grind, slow cook, mix, whisk, chop and crush ice (just to name a few). There’s even a function for cooking rice, soup, and porridge and making yoghurt.

Kmart’s thermal cooker also comes with an LED display and a touch control panel for time, temperature, speed, weight adjustments (with an integrated scale), and 10 speed settings with Turbo and Pulse. Did we also mention there’s a QR code with access to over 150 recipes to try? Yes, pretty fancy stuff.

Kmart’s gadget also provides everything you need in terms of accessories like a measuring cup, a multi-function blade, a kneading blade, a strainer basket, a butterfly whisk, and a spatula.

Our verdict: “The Kmart thermal cooker is a great value product especially when considering the smart features and functionality it offers, although there’s a limited capacity and temperature range,” according to Canstar Blue’s Home & Lifestyle Editor Megan Birot.

“Kmart’s appliance does stack up against other brands in the market, but it’s definitely most suited to smaller households.”

With that said, ALDI’s Mistral thermal cooker has the edge over Kmart on one feature (that could sway consumers) and that’s an LED screen. Besides that, both models boast similar functions including an integrated scale, 10 speed settings, a steamer unit as well as accessories for mixing, frying, kneading, and so on.

Unsurprisingly, Thermomix beats the Kmart thermal cooker on all fronts, except price. The cult gadget comes with a whopping 20 cooking functions, a 2.5L capacity, a higher temperature range of up to 160°C, and a 1500W power output for heating. The Thermomix does however come with a hefty price tag of $2,359 RRP*. With that said, Kmart’s thermal cooker does offer some nifty functions that make it a serious option for those on a budget.

Here’s a quick comparison of Kmart’s thermal cooker vs Thermomix.

Are Kmart’s kitchen appliances any good?

Kmart’s kitchen appliances are generally considered good quality for the price you pay. The department store is often rated highly for value for money and ease of use in most consumer ratings of appliances. Some products like kettles, air fryers, and cooking appliances like the thermal cooker also feature some pretty unique smart functions. Most Kmart appliances are sold under the official brand name Anko, although there are also some generic branded products with no brand name.