You are viewing the archived Pizza stores ratings.

Where can you get the best pizza to takeaway or have delivered? Compare pizza store brands with our customer satisfaction ratings to find out. 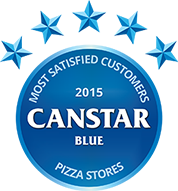 Having rated Australia’s pizza stores for another year, we’ve found a brand which is superior to the rest. Pizza Capers has won our Most Satisfied Customers award in 2015, having achieved a top rating for the fifth year in a row.

Pizza is one of the quintessential takeaway foods, with a pizza store in almost every suburb of Australia’s major cities. Whether it’s for a night in with some friends or because you’re just too busy to cook, pizza can be a delicious and convenient dinner option for many Aussies.

Whilst nearly half of the respondents to our recent survey told us they always order from the same pizza store, there are several different businesses around which offer a huge variety of toppings, delivery options and tasty alternatives to your bog-standard pizza pie.

Having rated Australia’s pizza stores for another year, we’ve found a brand which is superior to the rest. Pizza Capers has won our Most Satisfied Customers award in 2015, having achieved a top rating for the fifth year in a row.

In a closely-contested field, Eagle Boys, Crust and Dominos all achieved four-star ratings, with La Porchetta and Pizza Hut securing three. Pizza Capers secured five star ratings in four of our six criteria in a very impressive result, with three other brands also securing the maximum rating. Check out how each brand scored.

Value is enormously important when you’re getting some takeaway – after all, you can’t have pizza without extras like soft drink and garlic bread!

If you’re looking for more bang for your buck, you’ve got to go for the brand with the top value rating: in this case, Eagle Boys. Scoring five stars for the value of its offerings, Eagle Boys outpaced Dominos, Pizza Capers and Pizza Hut, all of whom received four stars apiece. Crust and La Porchetta’s offerings earned them three-star ratings.

Pizza is almost always a fast takeaway option, which means stores need to have an ordering system that’s a model of speed and efficiency – because it’s what we expect! The chains we rated all have online ordering capabilities and most even have mobile phone apps. That means it’s an even playing field.

Pizza Capers received five stars for customers’ satisfaction with the ordering process. Following this brand were Eagle Boys, Dominos and Crust with four-star ratings; with La Porchetta and Pizza Hut hot on their heels with three.

Pizza stores often provide discounts and multi-item deals to encourage customers to get a better all-round price – it’s one of the reasons that pizza is such a good option for group gatherings. Dominos and Eagle Boys both achieved five stars for their respective deals available to customers. Pizza Capers and Pizza Hut also scored well in the deals stakes, La Porchetta received three stars and Crust tallied two.

Our delivery satisfaction rating measured satisfaction with things like delivery speed, and additional charges incurred (if any). Pizza Capers picked up the five star rating in this area, and all but one other rated brand secured four stars for service – La Porchetta was the sole three-star achiever.

Choice is an important thing when choosing your pizza toppings, not to mention the myriad of sides, drinks and desserts which modern pizza stores now offer. 38% of surveyed Aussies said they usually add such extras to their order.

Crust and Pizza Capers were our ratings leaders for variety, and (reportedly) offer a wide range of exotic pizza toppings, salads, pastas, drinks and desserts. Both brands achieved five-star ratings; close behind in the menu stakes were Eagle Boys and Dominos with four each, followed by Pizza Hut and La Porchetta with three.

By far the most important arbiter of satisfaction (arguably) is how your pizza tastes. It seems Australians like to go for the tastiest pizza available – 58% of people told us they order gourmet offerings if they can afford it, with a mere 28% preferring to go for quantity over quality.

In the all-important taste category, it was a tie between Pizza Capers and Crust for five-star honours – look to these two if you’re after some delicious, gourmet takeaway. Strong showings also came from four-star achievers Eagle Boys and La Porchetta, and coming in next were Pizza Hut and Dominos on three stars each.

Canstar Blue commissions Colmar Brunton to regularly survey 3,000 Australian consumers across a range of categories to measure and track customer satisfaction. The outcomes reported are the results from customers within the survey group who have purchased and eaten a pizza (by buying online or in person) from a specialist chain pizza store/restaurant in the last 3 months – in this case, 1,712 Australians.