Tangerine Telecom might already be a familiar name when you think of NBN, but did you know that this telco also offers a range of SIM-only postpaid phone plans?

So, what can you expect from a postpaid SIM-only plan with Tangerine? Let’s take a look at what this telco has to offer.

How does Tangerine compare to other postpaid providers?

If you’re looking into Tangerine for your mobile service, plans are only available as postpaid options. All plans include unlimited standard national calls and SMS, while the different price points are reflected in the data allowances. Plans are offered month-to-month, so there’s no need to sign a contract, and you won’t be locked in for a year or more. You’ll also be able to access global roaming, and unlimited international calls to 15 select countries is included on certain plans.

If you’re after a postpaid plan, you could find a good option with Tangerine. There are seven plans to pick from, starting at $9.90 for 1GB of data and going up to $69.90 for a huge 100GB of data. No matter what your data usage is, there is something for everyone with a phone plan from Tangerine.

Heavy data users, however, might find that there are other telcos offering big chunks of data at cheaper price points. However, not many telcos offer plans with 100GB or more, so if you do a lot of video streaming, this could be a good plan to compare. While some telcos might offer plans a bit cheaper than Tangerine does, keep in mind these plans might be on a contract or could be a prepaid plan.

The following table shows a selection of Tangerine Telecom postpaid plans on Canstar Blue’s database, listed in order of cost from lowest to highest. Use our comparison tool to see plans from a range of other providers.

What does Tangerine Telecom offer?

Tangerine Telecom is pretty straightforward when it comes to what’s on offer. While there are no exciting entertainment extras like what you can expect from the bigger telcos, there is still fairly solid value for money.

For this reason, you should always check a telco’s website before signing up to see if your provider of choice will have coverage in your area, especially in regional and remote parts of the country.

The below map is a screenshot of Tangerine Telecom’s current 4G and 3G coverage, represented by the green and orange/brown areas. More detailed coverage information can be found on the Tangerine Telecom website. 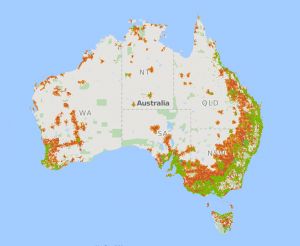 All of Tangerine Telecom’s plans include unlimited standard national calls and SMS, plus data inclusions for use within Australia.

Tangerine offers seven SIM-only postpaid plans in total, and all plans are on a month-to-month basis. You’ll get unlimited standard national calls and SMS, while data inclusions start at 1GB and go up to 100GB.

Need some help with your Tangerine Telecom plan or service? The telco offers several contact and support options including:

How does Tangerine Telecom compare?

Is Tangerine Telecom a good deal?

If you’re looking for a simple, no-fuss SIM-only postpaid plan, you might find Tangerine Telecom has a decent selection of plans to choose from. While the telco is mostly known for NBN plans, the phone plans do have some decent inclusions at reasonable price points, especially if you’re looking at around plans with around 20GB-60GB data.

While its top-level $69.90 plan might be a bit steep, the 100GB of data should make up for it. It’s not common for small providers to offer around 100GB of data, which is good news if you tend to use a lot of data. Keep in mind that bigger telcos like Telstra and Vodafone offer similar amounts of data at similar prices and might have extra perks included on plans. As always, it’s important to compare phone plans from a range of providers to find a plan to suit you.

Overall, while Tangerine has a fairly straightforward offering for its phone plans, you could find some good value depending on what your needs are. These plans have inclusions for pretty much every type of phone user and while there are some cheaper deals around, it’s worth looking at Tangerine. Of course its always worth doing your research and comparing what plans are available from other telcos to help you find the right phone plan and provider for your needs.