Food smoking has come back into vogue recently, with handheld food smokers featuring on TV cooking shows like Masterchef. Amazon is reporting that sales have jumped upwards of 200% since 2015. With the competing models currently on market, it can be difficult to determine exactly which ‘smoking gun’ suits you best. Canstar Blue reveals why smoking food can be a useful trick to have up your sleeve, how much handheld smokers cost, where you can buy them, and which brands to look out for.

Beyond the traditionally smoky taste, modern smokers allow the adding of aromatics, which enhance the taste of the food being smoked. Different types of fuel will impart a different taste, with 500g bags of smoke-ready woodchips now available at many food stores.

There is scientific discussion as to why humans love smoked food stemming back to hunter-gatherer times. “Evolutionary speaking, fire and smoke signal meat roasting, so we may have been programmed to find them desirable,” said Oxford experimental psychology professor Charles Spence.

Food can be either hot or cold smoked. 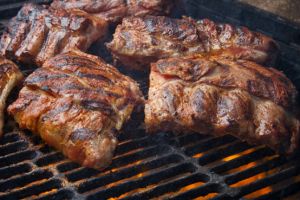 Why a handheld smoker?

Handheld food smokers have become the preferred method to prepare smoked dishes for many home chefs. Traditionally, smoking would require either a large offset or gas smoker, which would have to sit outside in all but the largest, most well ventilated kitchens. Now, handheld food smokers allow wannabe gourmands to smoke food without the large space and ventilation commitment.

What can I cook with a food smoker?

It’s possible to use a food smoker to add some flavour to otherwise dull condiments, create some impressive cocktails or even entirely new meals. Food smoking can add a new twist to some classic condiments:

Some classic recipes can take on new taste profile once smoked:

Adventurous bartenders have even incorporated handheld smokers into drink recipes:

How do I use a handheld food smoker?

There are a few different methods of cold-smoking food or drinks. They generally involve enclosing the ingredients in a container, which is then filled with smoke from the woodchips or aromatics used in the smoker.

How much do handheld food smokers cost?

Handheld food smokers generally start at around $100, with the more expensive models costing around $150. Hickory and maple wood chips, both staple aromatics, will set you back around $10, depending on availability. Less common aromatics naturally fetch a higher price.

Where can I buy a handheld smoker?

If you’re thinking about buying a food smoker, the market leaders are the smokers from PolyScience and Breville.

The original, PolyScience ‘The Smoking Gun’ popularised handheld smokers with its appearances on Masterchef. The model boasts a heavy-duty metal fan – preventing it from melting during extended smoking sessions. It also includes a removable aluminium smoking chamber for ease of use. It runs on four AA batteries.

The newest version of The Smoking Gun is available for about $130 from Australian online retailers, with apple wood and hickory sample packs included. The previous version of the product can be found online for as low as $90.

Breville’s smoking gun is available at a RRP of $99. This includes the smoker, hickory and apple wood samples, a mesh replacement, a wood chamber and several recipe cards.

Should I buy a handheld food smoker?

If you want smoked flavour without sacrificing much kitchen space, a handheld smoker is a good choice. The small size factor would be particularly appealing to apartment dwellers or renters. For those on a budget, it is possible to smoke food without specialist equipment. House smoke alarms may prove an obstacle, so those attempting to DIY smoke should make sure their kitchen is well ventilated.

If space and price is not an issue, you may want to weigh up whether a traditional food smoker is right for you. This would allow hot smoking, which cooks the ingredients for a fuller flavour. Expect to pay a higher price for a hot smoker, as well as needing a lot more wood chips. However, as with any cooking appliance, it’s only worth buying if you’re going to use it a lot. We’re sure a lot of people out there got inspired by Masterchef, only to have a $100 gun-shaped paperweight (or serviette-weight) a year later. Handheld smokers are in-vogue, but don’t let the trends sway you.