2020 has taken another icon from us as we’ve had to say goodbye to the feminist trailblazer and US Justice of the Supreme Court Ruth Bader Ginsberg. Only the second woman to ever be appointed to the high court, the “Notorious RBG” as she was affectionally nicknamed, spent her life fighting tirelessly for gender equality.

In honour of her passing, BINGE has added the 2018 film starring Felicity Jones ‘On the Basis of Sex’ to its library, with the bio-drama following RBG’s early life and career to give us insight into the beginning of an amazing woman’s legacy.

What is On the Basis of Sex about? 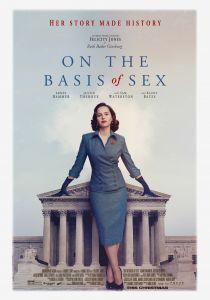 Written by Daniel Stiepleman (who also happens to be Ginsberg’s nephew), On the Basis of Sex chronicles the true story of Ruth Bader Ginsberg throughout her early life in law school and the beginning of her career as a pioneering jurist and feminist hero.

Starring a remarkably similar-looking Felicity Jones (The Theory of Everything, Rogue One: A Star Wars Story) as RBG and Armie Hammer (Call Me By Your Name, The Social Network), as her husband and attorney Marty Ginsberg, we first meet the two in 1956 where RBG is a law student at the top of her class at Harvard Law, of which she is constantly discriminated on the basis of being a woman.

A few years later, she is a new mother, teaching as a professor in New York, unable to find work as a lawyer — again, on the basis of her sex. Everything changes in 1970 when Marty alerts her to a sex-based discrimination case (‘Moritz vs. IRS’) that they both know could change the course of her career and the equal rights of her gender in American society for good.

Spoiler alert: the groundbreaking case is the first to ever rule that gender discrimination is a violation of the U.S. Constitution and results in her nomination and confirmation as US Supreme Court Associate Justice, a seat which she would remain in until her death at aged 87 in 2020. They didn’t call her the Notorious RBG for nothing.

Also starring Justin Theroux, Jack Reynor, Cailee Spaeny, Sam Waterston and Kathy Bates, On The Basis of Sex is now streaming on BINGE in honour of her passing, so check out the film to pay homage to an icon.