Apple recently announced the iPad Pro and iPad Mini 4 at its latest glitzy product-launching event in San Francisco. The former boasts upgrades to both size and power to give you a powerful work tool, while the latter keeps things small and light to focus on convenience. So what are some of the key features of these two new models and how do they stack up compared to Apple’s previous efforts?

The iPad Pro, as its name suggests, is Apple’s shot at making a tablet that can act as a full-blown workstation to replace your laptop. The Pro takes the fight to 2-in-1 machines such as Microsoft’s Surface Pro, boasting a 12.9-inch Retina display that puts it squarely in small laptop territory – significantly bigger than the 9.7-inch iPad Air 2.

Apple is also being vocal about the Pro’s new A9X chip, which has 64-bit architecture and nearly twice the CPU and GPU performance of the aforementioned iPad Air 2 – all of which gives it enough power to be a genuinely viable PC replacement.

The hardware represents a significant step up from the relatively predictable fare we’ve come to expect from the iPad – you can only make a device so much thinner before people start getting bored. The Pro comes with Apple’s first-ever stylus pen, dubbed the Apple Pencil, which boasts extremely low latency and high sampling rates to give you super-accurate control. The pen is sensitive to both pressure and angle, allowing you to change what you write or draw just as you would with a real pen. It even has a nifty lightning charger built into the top, which will give you half an hour of battery from only 15 seconds of charging (the maximum is 12 hours, not bad for a pencil).

Another key hardware bump are the four inbuilt speakers that deliver stereo sound which actually changes depending on the iPad’s orientation – perfect for watching movies in bed on a lazy evening. 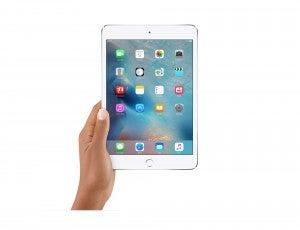 The iPad Mini 4 sits at the opposite end of the spectrum. Small, lightweight and portable, the fourth baby iPad continues to consolidate its position as one of the leaders of the small tablet market.

The Mini 4 boasts a construction that’s 18% thinner than the previous model, with a faintly ridiculous weight of less than 300g – probably lighter than your morning newspaper. Like its big brother, the Mini also boasts significant performance improvements; in this case, a 30% faster CPU and a 60% faster GPU. Whilst the A8 chip won’t reach the lofty performance heights of the more expensive iPad models, it’s still more than enough to game, video or work to your heart’s content.

Apple’s typically high-end hardware features have also received an upgrade, with a higher-quality front-facing camera for the selfie addicts, and a rear camera which can now capture 1080p HD video. The home button now includes the Touch ID sensor which first debuted on the iPhone 5S, meaning you can now use fingerprint authentication to prevent your kids from unlocking your device or renting movies.

On the software side, both iPad models come with Apple’s latest iOS 9 firmware straight out of the box. This includes such features as split-view multitasking, easier sharing between Apple devices, a swag of new and updated standard apps like News and Notes, and a number of behind-the-scenes improvements which make the OS faster and less bulky. Both iPads come with several accessories such as the smart keyboard for the Pro, or the smart cases for the Mini which activate the screen when you open the cover.

All in all, it’s another innovative, high-quality update from Apple, the likes of which we’ve come to expect in recent years. With the iPhone 6S also being released shortly, the Cupertino tech giant is showing no signs of slowing down.

Telstra TV: what you need to know