You and a mate you’ve known since high school have decided to start a share house together. You’ve found a random stranger on Facebook to take the worst room, and are now spending half of your work day looking at second-hand couches on Marketplace. You grab the keys from the real estate and suss out your new digs a few days before moving in, only to realise there’s actually no electricity. What next?

Whether you’re moving into a new house, or are simply looking to pay less for electricity in your current situation, there’s a few things to know about power in a share house.

How to set up electricity in a share house

It’s less daunting than you’d think to set up electricity in a share house. Here are four easy steps to get you on your way:

How to split the energy bill in a share house

It doesn’t matter whether you’re living with friends or strangers, money matters are a sensitive topic, and collecting cash to pay an electricity bill is no exception. Here are some tried and true ways to split up the costs so that your housemate Alex won’t ‘forget’.

Splitwise is a true saviour, even to the most annoyingly responsible households, for keeping tabs on who owes who, what. Before you can request money, you will need to make sure your housemates have downloaded the app.

Once you’ve added the amount of the power bill in the app, Splitwise will immediately notify your housemates. So, if your bill comes to a total of $200, the other three members will get an alert saying they each owe you $50. However, if you owe Josh $20 after he paid for Uber Eats the other day, the app will work out that Josh now only owes you $30 to make it even. Although you may still need to give your housemates a nudge to settle everything before your bill is due.

This one’s a no-brainer. If you don’t already have a housemate group chat made up, it’s time to hop into the 21st century and make one. Most messaging platforms these days allow you to see when others have seen a message, so you’ll know for sure that your housemate Tasmin has seen what she needs to see.

Maybe your roommates are bad with their phones, and that’s okay, because there are harder things to avoid than a mobile. If you receive a paper energy bill, pop it on the fridge as a daily reminder of its due date, or simply write up a note to let your house pals know when to transfer you, and how much. 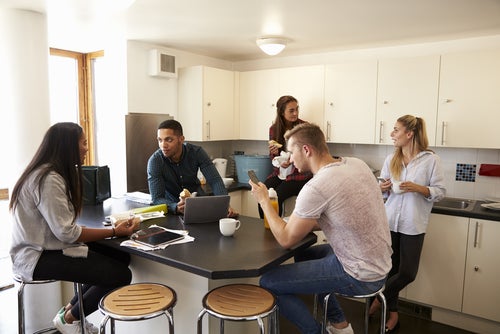 There’s good news, and bad news. The good is that it doesn’t matter whether or not you live in a share house, your energy account will be treated the same way as your neighbour’s who own the property next door. The bad news is that the world of energy retail is virgin territory to most 20-30 somethings, so it can be difficult to avoid bad, yet attention-grabbing, deals.

Here are some things you should look for, and some to be cautious of:

You pay for your energy in two parts – a supply charge and a usage charge. A supply charge will normally sit at around $1 a day, which is what the power companies charge just to keep you connected. The other, larger, part of your bill is the rates. You’ll get a cent figure (e.g. 22c) that you’ll pay per kWh of energy you use (kWh is the unit of measurement for electricity). Let’s say your house uses around 15kWh on Tuesday, you’ll pay $3.30 + the $1 supply charge for power that day. It then makes the most sense to search out a plan with the cheapest rates possible, paying extra close attention to your usage rate.

Some energy plans have ‘em and some don’t, and that’s discounts. Look out for these because sometimes energy discounts are slapped onto higher rates, and a plan that seems like a good deal could work out more expensive than a low rate, no discount offer. Most discounts these days are conditional, meaning you’ll have to meet a set of criteria for them to apply, such as paying on time or by direct debit.

Energy retailers are notorious for rewarding those that sign up online rather than on the phone, which is basically a phone-conversation-hating millennial’s dream. Over the years there’s been everything from a Google Home Mini to Taronga Zoo tickets up for grabs, but the most value sits in sign-up credits. Suss out whether your provider will give you a discount on your first bill upon signing up.

Like your superannuation fund and bank, energy companies are ranked on a scale of green to not-so-green. With so many young Australians making sustainable choices in their day to day lives, we’ve listed out some plans by providers Greenpeace Australia has ranked highly in their Green Electricity Guide.

As mentioned, there aren’t many renter-friendly energy plans because your power is connected in the exact same way as everyone else down your street. That said, there are certain electricity plan features which may appeal to share house dwellers looking to save a buck or two.

Below are a few plans on our database that have features that may appeal to share house occupants.

Here is the Lumo Movers plan on our database for South Australia. These costs are based on SA Power network in Adelaide but prices will vary depending on your circumstances. Plans are listed in order of lowest price first. See here for further information on the AER Reference Price, which in this comparison assumes general energy usage of 4000kWh/year for a residential customer on a single rate tariff, meaning that the Reference Price is $1,716/year. Use our comparison tool for a specific comparison. These are products from a referral partner†. But keep in mind our database may not cover all deals in your area, and please don’t forget to check retailer websites for up-to-date information.

Relax, this is a safe space, there are no dumb questions. No one expects someone who lives in a share house to know everything about energy, so we’ve compiled a list of genuine questions asked by 20-somethings in Brisbane and Sydney to get this show on the road.

Is electricity included in rent?

Most likely, no. In some special cases it may be, if you’re renting from your generous Aunty or are the savviest person alive and have managed to snake the deal of a lifetime. The rest of us normal folk will be expected to manage electricity independent from our landlords/real estate.

Can your energy company split the bill for you?

Another big no. Your bill will come in one big, intimidating figure every month or quarter, or whatever, at which point you’ll need to group hustle to pay for it.

Do I have to tell the landlord/real estate if I switch providers?

Unless your landlord or real estate manages your power bill, or you’re on an embedded network, you’re on your own and the answer is no.

The house has solar panels. Do we still pay electricity?

Solar panels are certainly a big fat bonus, and will likely drive down the cost of your bill, but unless the house you’re renting is off the grid (highly, highly unlikely), you’ll still pay for the electricity you use. Something to be aware of though: Check your tenancy contract for any notes about solar rebates. It’s not unheard of that landlords will try to pocket the money made from the panels on their property, rather than you benefiting.

Is there any way to get out of paying electricity bills?

If you’re financially struggling, you need to let your power company know so they can put you on a hardship policy plan. This varies between providers, but normally gives you some leniency in paying what you owe. You’ll have to make a reasonable effort to pay though, otherwise you run the risk of having the lights turned off.

What happens if you don’t pay your electricity bill on time?

The good news is you won’t be disconnected for a while. You’ll likely be charged late fees, which you can pay alongside settling your overdue bill, or on your next. But if you continue to miss payments, that’s when your energy company starts to get annoyed and you’ll get all the threatening letters in the mail.

Why is my electricity bill so high?