Electricity plays an integral role in our lives, powering pretty much every modern piece of technology, from computers and mobile phones to the lights and appliances in our homes. It’s such a ubiquitous and well-developed utility, we completely take it for granted – yet so many of us have no idea how electricity actually works.

In light of our customer satisfaction ratings for electricity providers, we’ve created this easy to understand guide to help you understand the most important form of energy in the world.

In the context of power supply, electricity is simply the motion of electrons around a circuit from a negative terminal to a positive terminal. The positive terminal attracts the negatively charged electrons, and as they move from one atom to the next, they carry kinetic energy – energy which can be harnessed to work in electronic devices.

An electric current moves at speeds close to the speed of light, though individual electrons move fairly slowly between atoms. Some substances are better at conducting electricity than others – the most widely used material in wires is copper, due to its great conductivity and abundance in nature. Conductive materials are known as conductors, and non-conductive materials are known as insulators. Many polymers and plastics are good insulators, hence why you often see them used to coat wires.

How is electricity measured? 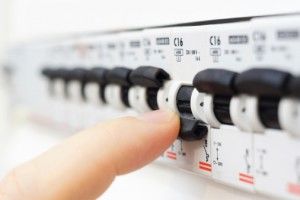 Electricity is measured in Watts (W), more commonly expressed in Kilowatts (kW), where 1kW is equal to 1000W.

But you will notice there is no reference to ‘kW’ on your electricity bill, rather you will see ‘kWh’, meaning kilowatt-hour. While kilowatts are the measurement for electricity current, electricity usage is measured in kilowatt-hours. Essentially, a kWh is the amount of energy consumed if you ran a 1kw appliance for one hour. Alternatively, if you were to run a 100W (0.1kW) lightbulb, it would take 10 hours to use 1kWh.

You might occasionally come across reference to voltage (energy per electron) and currents (electrons per second), however unless you’re an engineer, you probably don’t need to worry about those ones.

How is electricity produced?

Most electricity is produced using a generator, which converts mechanical energy into electrical energy. A generator consists of a spinning magnet on a shaft, surrounded by wire (or spinning wire coils surrounded by a magnet); the shaft is connected to a turbine which is powered by whatever energy source is being harnessed. When the wires move relative to the magnet, it induces electrical current.

There are a variety of ways to power electricity generators: power plants burn coal or gas to create steam which spins turbines, windmills are spun by the wind and generate electricity directly, hydro plants use the energy of flowing water to drive turbines, solar panels use sunlight to generate electric current through the photovoltaic effect – there are a lot of ways to generate power.

How is electricity stored and transported?

Electricity output at power plants nationwide needs to be closely matched to demand to avoid waste energy or inadequate supply. To achieve this, the Australian Energy Market Operator operates the National Electricity Market to facilitate sales between producers and retailers, and to supply demand data to produce electricity as efficiently as possible.