Canstar Blue is all about helping Aussies make better-informed purchase decisions, whether it’s appliances, electricity, new cars, or phone and internet plans. When it comes to mobile and broadband, we publish annual customer satisfaction ratings to show which telcos are best-rated by their customers. But now we can also leverage the data from our comparison tools to show you – based on our expert methodology – which phone and NBN providers are consistently offering superior value. We want to give you as much information as possible before deciding which telcos to choose.

“These awards are all about finding out which telcos are consistently offering great value for new customers. Phone and internet costs are generally going down, but cheap prices don’t always translate to the best value,” said Canstar Research Manager, Mitch Watson.

“That’s why we’ve built comparison tools that allow Aussie consumers to compare based on the cheapest prices, but also the value proposition offered by the telcos, including the data limit provided, as well as the features included, and the telco’s customer service offerings based on our data collection and research methodologies. 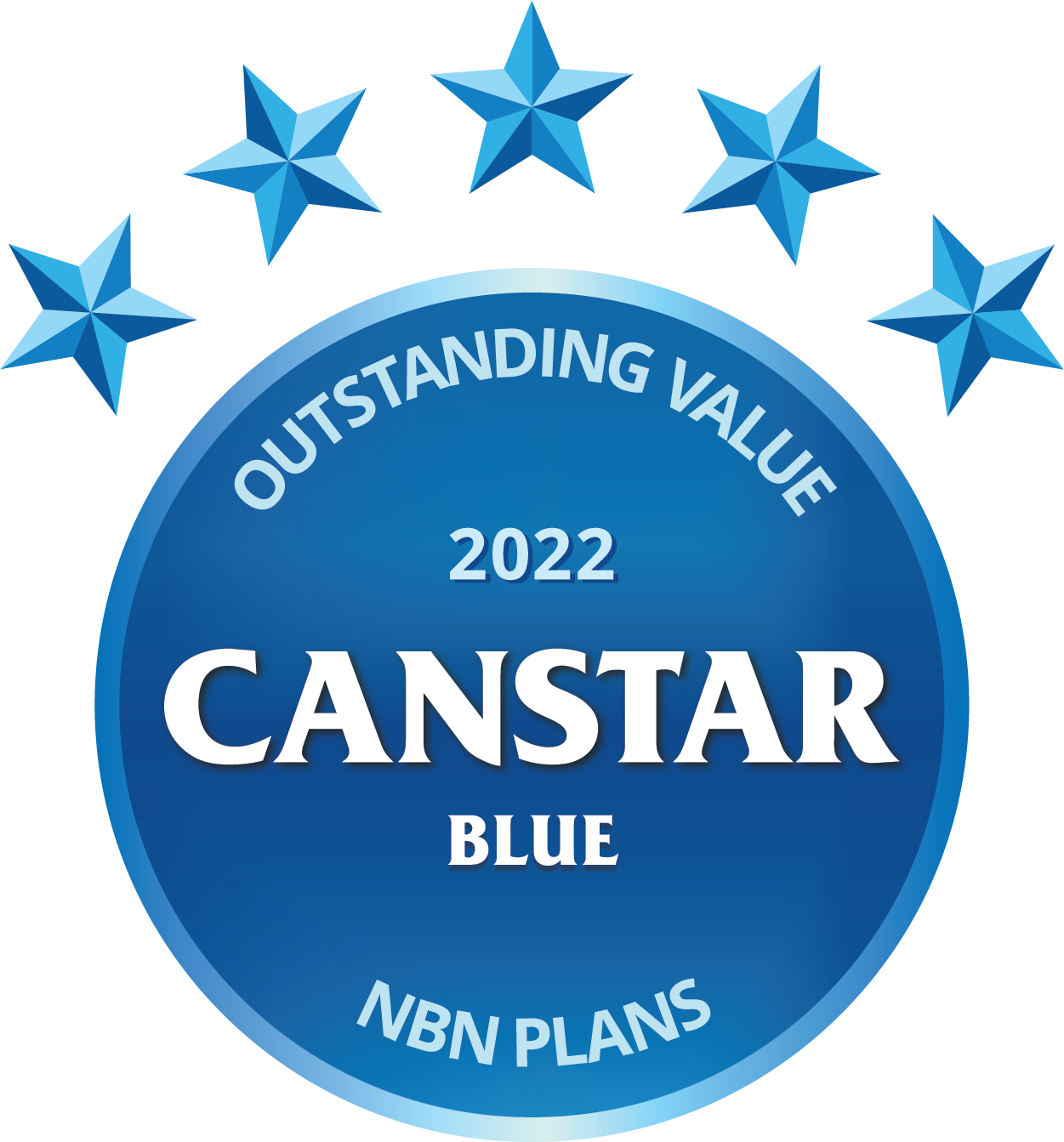 One of Australia’s biggest and best-known internet providers, TPG remains a popular pick for NBN customers thanks to its large range of flexible and customisable plans. Despite a high-profile merger with Vodafone back in 2020, TPG hasn’t missed a step when it comes to offering competitively-priced and consistently-fast home internet, and has taken home Canstar Blue’s Outstanding Value Award for NBN for the second consecutive year.

TPG gives customers a wide selection of NBN options, and offers plans to suit everyone from low-level users to serious downloaders and online gamers. Plans begin at under $30 per month for 10GB of data, although unlimited NBN starts at $59.99 on the entry-level NBN 12 speed tier. TPG offers plans across all six major residential NBN tiers, including NBN 12, NBN 25, NBN 50, NBN 100, NBN 250 and ultra-fast NBN 1000, although availability will depend on your location.

While TPG previously gave customers the option of going no-contract or signing on for six months, the telco has now ditched contracts completely and offers all plans on a month-to-month basis. Customers can bring their own modem, or add new NBN-ready hardware at the checkout for an upfront fee.

TPG also offers extras such as landline calling packs, and it’s no-contract setup allows customers to change their speed tiers as needed without penalty. New customers should keep an eye out for introductory discounts, or consider bundling their NBN service with a TPG mobile plan to save $10 per month on their phone bill.

Competition in the NBN space has never been more heated, particularly with more telcos vying to win customers over to faster and pricier speed tiers. But TPG’s consistently well-priced plans position the provider as one of the highest-value options for Australian homes of all sizes and budgets.

The following table shows a selection of published TPG NBN plans on Canstar Blue’s database, listed in order of monthly cost, from lowest to highest, and then by data allowance. Use our NBN comparison tool to see plans from a range of other providers. This is a selection of products with links to referral partners. 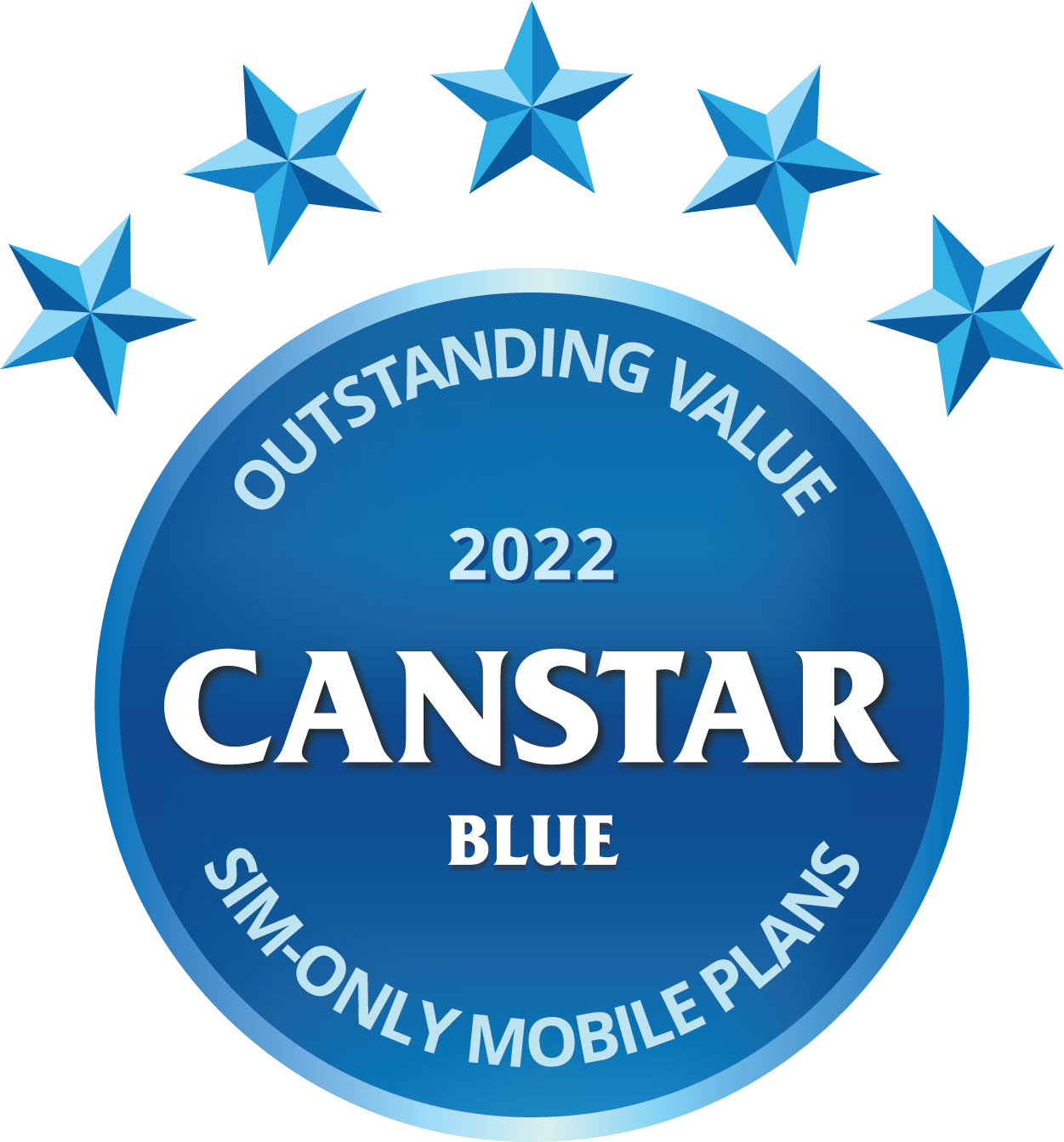 Making it three years in a row, Moose Mobile has once again taken out the title of Outstanding Value for postpaid SIM-only phone plans. As an MVNO on the Optus 3G and 4G network, Moose Mobile has a reputation for offering a wide range of postpaid plans, with some great value for money packed in. It also helps that you’ll frequently find discounts offered on many of its plans — some serious incentive for switching to Moose.

Moose Mobile is one of the few telcos to offer both month-to-month and 12-month SIM-only plans. While many telcos have made a point of only offering month-to-month plans, the advantage of the 12-month plans is that, if you’re happy with the service you get from Moose, you can get a bit more value for money on your plan when signing up for a full year.

This rather wide range of plans, packed with simple inclusions and generous data for your money, is why Moose stands out in the SIM-only postpaid space. No matter what your data needs are, you’ll most likely find a good option with Moose. If you already have a phone you’re happy with, and have been considering a plan change, you might find a cheaper or better deal by switching to Moose Mobile. 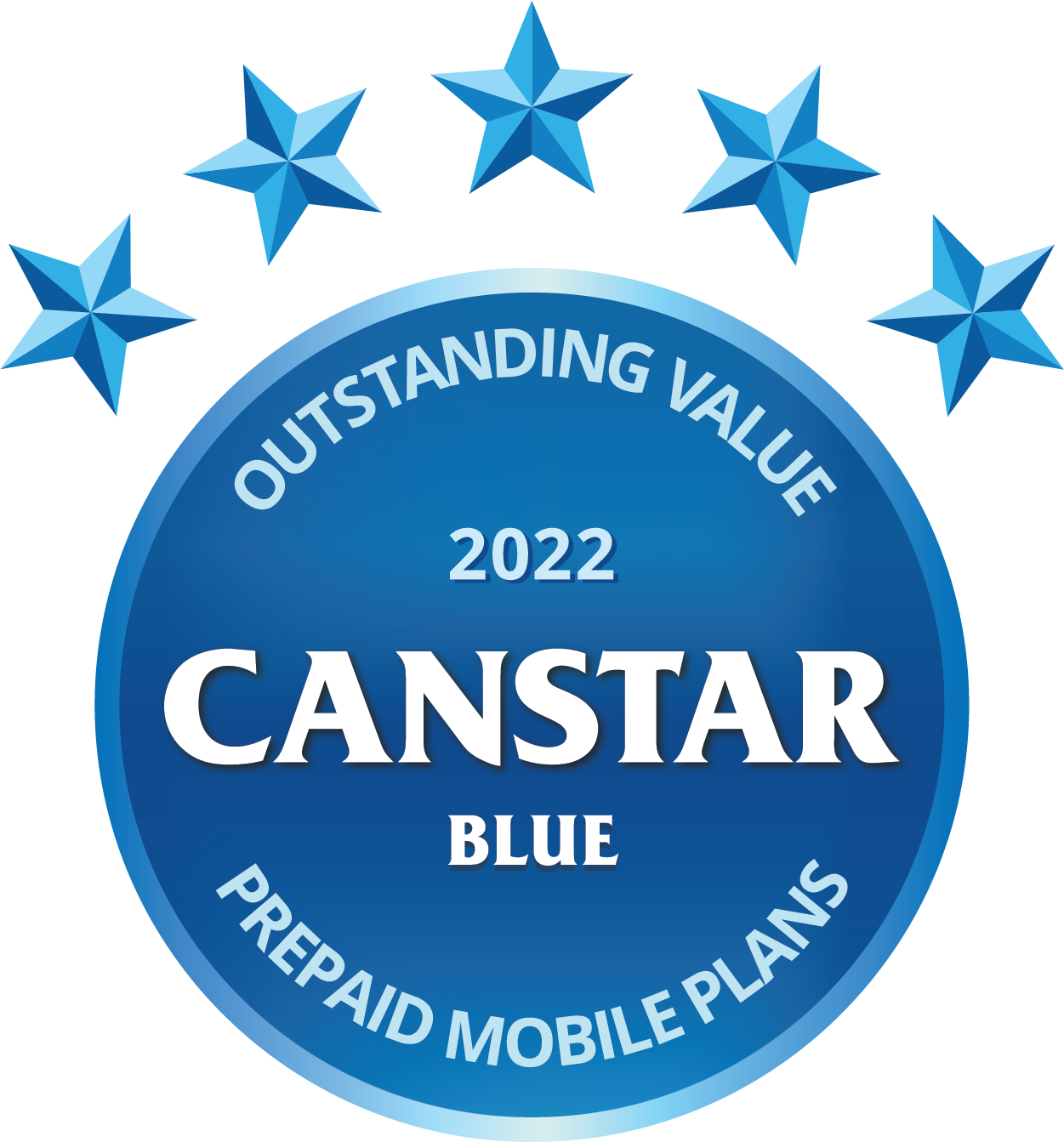 As a first-time winner in the prepaid space, iiNet is yet another brand under the TPG Telecom umbrella to take out an Outstanding Value award. iiNet delivers its simple suite of four prepaid plans on the Vodafone 3G and 4G network, and new customers can often find a range of discounts on sign up, helping to further cement its prepaid plans as great value for money.

Although these discounts might not be available forever (iiNet does not list this as a limited offer, however it may be withdrawn at any time), it’s still one of the few telcos to offer new customers price cuts on phone plans, as these six-month discounts are much more commonplace on NBN plans. For that, anyone looking for a prepaid phone plan might find some serious value for money with iiNet mobile.

The following table shows a selection of published iiNet prepaid SIM-only plans on Canstar Blue’s database, listed in order of cost, from the lowest to highest and then by data allowance, largest to smallest. Use our phone comparison tool to see plans from a range of providers. This is a selection of products with links to a referral partner. 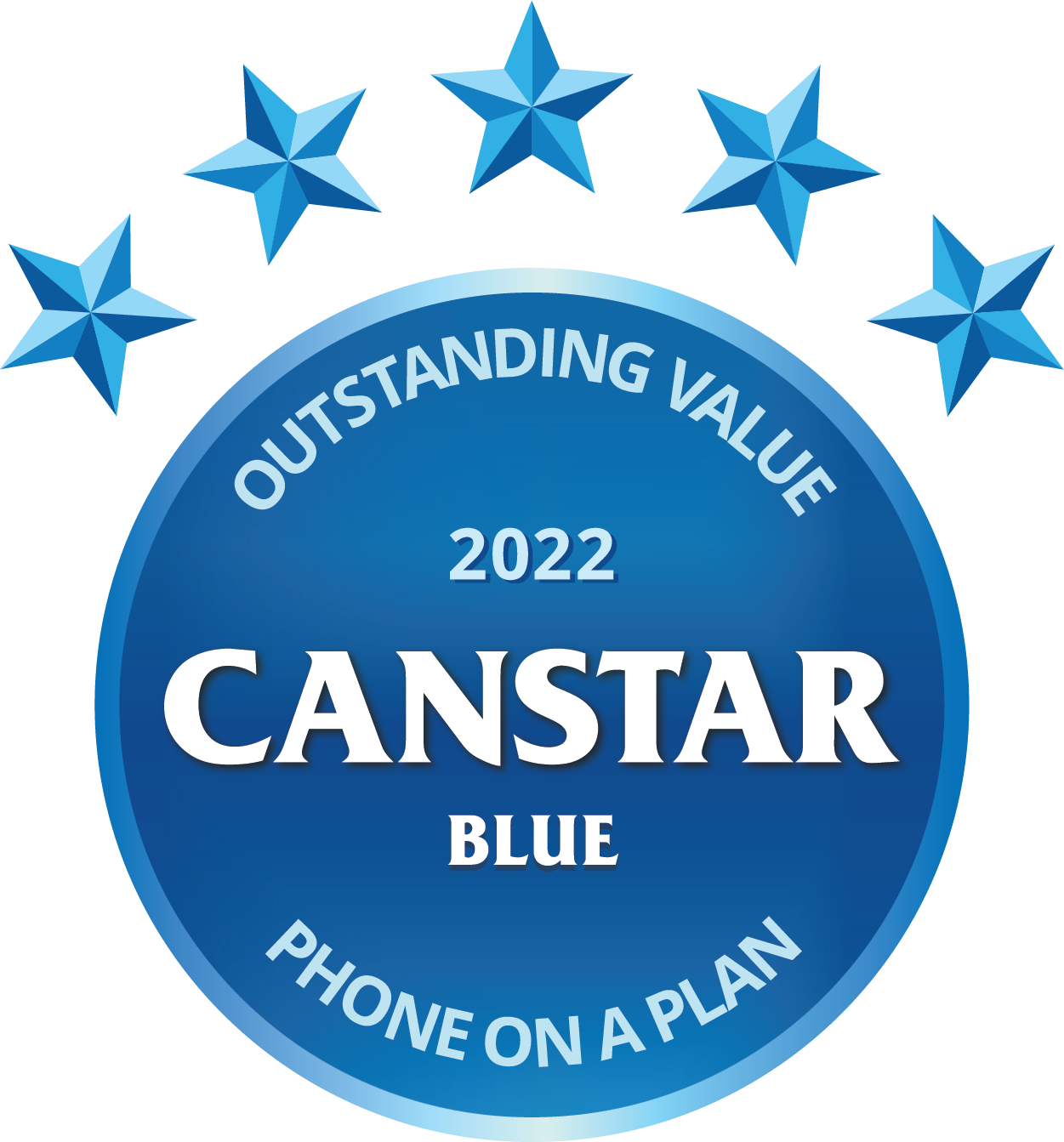 Vodafone is once again the winner of our Outstanding Value Award for Phone on a Plan, after taking out the title in our 2021 awards. Proving it’s no one-trick pony, Vodafone’s continued focus on offering feature-packed, flexible mobile plans and cut-throat pricing has kept the telco on top when it comes to value.

Vodafone has been an ongoing market leader in phone on a plan innovation, and the company is behind many now-standard handset plan features, such as separating device payments from mobile plans. Customers looking to buy with Vodafone can select from a wide range of phone options, including the latest models from Apple, Samsung, OPPO, Google, TCL and Motorola.

Customers have plenty of choice when it comes to devices, with Vodafone offering premium, mid-range and affordable handsets that can be paired with any of  its five SIM-only postpaid mobile plans. All phones can be paid off over 12, 24, or 36 months of repayments, and customers aren’t locked down to a single SIM plan for the duration of their device payments – you’re free to move between plans as needed.

All Vodafone plans include unlimited standard national talk and text in Australia, a full-speed data allowance (including 5G access), and additional unlimited speed-capped data. The telco is also the only Australian mobile provider to offer truly unlimited, full-speed mobile data, thanks to its game-changing and aggressively-priced Ultra+ plan.

Vodafone is also known for its frequent and ongoing plan fee discounts and bonus data, packing more value into its already competitively-priced phone plans. Overall, Vodafone’s ongoing commitment to offering customers flexibility, choice, and affordability has made the telco a clear leader in the phone on a plan space over the past 12 months.

The following table shows a selection of published 24-month Vodafone plans for the 64GB iPhone 13 on Canstar Blue’s database, listed in order of cost, from the lowest to highest and then by data allowance, largest to smallest. Use our phone comparison tool to see plans from a range of providers. This is a selection of products with links to a referral partner.

Further details on the awards methodology can be made available on request.

This page was written and is regularly updated by Canstar Blue’s Telco Editor, Tara Donnelly. Having spent around a decade writing for and editing telco comparison websites, she’s an expert in all things phone & internet, including NBN plans, wireless technology, the latest mobile devices and how to find the best deal for your family. She loves to highlight the next best deals, while also flagging the things you need to be aware of.

Canstar Blue’s Telco Provider of the Year Awards in 2021 saw the following winners:

Further details on the awards methodology for 2021 can be found via the following links:

Canstar Blue’s Telco Provider of the Year Awards in 2020 saw the following winners:

Further details on the awards methodology for 2020 can be found via the following links: