Some of Australia’s most popular fast-food restaurants, Domino’s Pizza, Grill’d and Oporto, have been ranked at the bottom of a list based on their public positions on tackling obesity.

The report from Deakin University’s Global Obesity Centre examined the 11 largest fast-food restaurants – which cover approximately 67 per cent of the market – using publicly available information, and ranked each company based on their policies relating to healthy eating.

The restaurants – some of which have reacted angrily to the research – were each given a score out of 100 based on six key factors, including their policies on marketing food to children, disclosure of nutritional information on menus and online, their plans to reduce ‘nutrients of concern’ like sugar and saturated fat, and a commitment to health in corporate strategy.

It was found that nutrition and health was not a focus area for the majority of the largest quick service restaurants and there was a sector-wide failure to disclose their steps in addressing obesity and nutrition.

The report calls for the companies to be more transparent about their nutrition policies and commit to reducing salt, sugar and saturated fat.

Domino’s Pizza was at the bottom of the list with a total score of just 3 out of 100, receiving zero in each category except for nutrition labelling and transparency in its corporate relationships.

Subway was scored the best overall, at 48 out of 100, with researchers suggesting that it could do better by phasing out free soft drink refills. It has both a healthy drink and side default for all kids’ meals and has axed artificially produced trans fats.

Subway and Nando’s both offered further information to researchers, while other companies declined.

Deakin University’s Associate Professor and the lead author, Gary Sacks, said Australians spend about 32 per cent of their food budget on takeaways and eating out, which means the fast food industry has a big impact on our diets.

Prof Sacks said there needed to be an emphasis on making healthy options easy and cheap, and not on offering deals for products that were full of sugar.

Fast-food meals should be automatically served with water and salad or fruit unless customers ask otherwise, the obesity researchers say.

“All meal deals should have water and a healthy side as the default option — particularly for kids,” Prof Sacks said.

Price cuts for healthy choices are also being urged to motivate a shift from chips and sugary drinks.

Prof Sacks said that, while some outlets have added healthier choices, such items were typically more expensive, with most heavily promoted items still being unhealthy, like $1 frozen Coke or two-for-one burgers.

The new report – the third in a series that has previously ranked supermarkets and food manufacturers – found all of the restaurants had provided comprehensive nutrition information online, but all needed to improve their disclosure and transparency on their policies for healthier eating.

“There’s a real opportunity for fast-food companies to help address the problem by introducing policies that make healthier choices, like water and fruit or salad, the automatic option for kids’ meals,” Prof Sacks said. 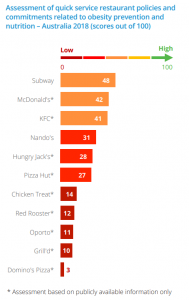 Source: Inside Our Food Companies Australia

The report calls on retailers to adopt a pricing strategy that puts healthier products at a similar or lower price to ‘less healthy’ equivalents.

It concluded that, while some chains have taken steps in the right direction to tackle obesity and unhealthy diets, there is a ‘much greater role for the sector to play’, which should be monitored by the government.

The audit of 11 chains was primarily based on publicly available information because most of them did not provide any extra details. It noted industry progress on reformulated products, menu labelling and nutrition information while specific product healthiness was not assessed.

Deakin Associate Professor Gary Sacks has called on all companies to offer salad or fresh fruit as an alternative to fries, and water rather than juice or soft drink as a preferential option: https://t.co/TG53AlrzUm via @theheraldsun

Some retailers were unhappy with the study, with burger chain Grill’d saying it was considering legal action after it was scored 10/100. The Grill’d founder Simon Crowe slammed the results, alleging the research was “flawed, misleading and deceptive”.

“This survey is focused on how companies can do better in relation to their policies on nutrition and obesity and yet failed to recognise that Grill’d has been focused on those very issues since 2004,” Mr Crowe said.

“My concern is that the researcher who undertook this work appears not to have thoroughly examined the Grill’d website which clearly states our position on the survey questions.”

Domino’s also said it had detailed nutritional information available online and in stores and that it already met or exceeded a number of recommendations.

A Domino’s spokesperson said: “Unfortunately, many people have taken an incorrect impression from this latest research that it measured the nutritional value of our meals – this is not right.

“Instead, the report measured our approach to healthier food options, and policies such as not marketing to children – this is something we are proud we have never done.

“Domino’s is a treat, and customers choose what’s healthy for their lifestyle.”