Do we all hate vacuuming so much that each gender thinks we’re doing more work than the other? The results of this survey don’t show that, but it’s certainly clear that both men and women think they’re doing their fair share of the vacuuming.

Those in the younger end of Generation X were the only ones to find something different, with 60% of men and women in the 25 – 29 age group agreeing that women do most of the vacuuming in their house. 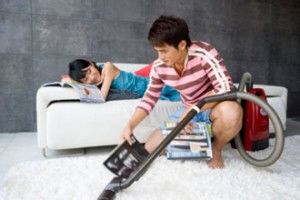 Previous studies by Canstar Blue have shown that overall, almost a quarter (23%) of women resented their partner for not pulling their weight in the household chores.

More than half of women feel that no one cleans the bathroom to their standards. Nearly one quarter of Australians say they often argue with their partner or family over the cleanliness of the bathroom.

The situation seems much the same in the UK, with a study by Sainsbury’s showing that while more men are helping out around the house than ever before, half of their women think they aren’t doing the job properly.

A quarter of men said they were certain they were doing a satisfactory job of their household chores.

How to avoid bathroom arguments

The good news is that regardless of gender, our children and teenagers are still helping out around the house. A 2010 study by the Australian Institute of Family Studies showed that although the amount of work being done overall had dropped, children and teens were still doing a significant – if slightly lesser – percentage of housework compared with earlier studies from 1992 to 2006.

Studies by Harvard psychologist Richard Weissbourd have shown that chores teach children how to be empathetic and responsive to others’ needs instead of focussing solely on personal achievement and happiness. In research published last year, he and his team surveyed 10,000 middle school and high school students on these and other topics.

The data suggests we might benefit from training our men from a young age to be involved in household chores. Not just for our families, but for our men.