Many small businesses rely on the internet every day, so find out which ISP tops our list for ‘most satisfied customers’.

Show Important Notes^* Hide Important Notes^*
* Overall satisfaction is an individual rating and not a combined total of all ratings. Brands with equal overall satisfaction ratings are listed in alphabetical order.
^ By clicking on a brand or ‘details’ button, you will leave Canstar Blue and be taken to our referral partner to compare. You agree that Canstar Blue’s terms and conditions apply to this referral. If you click on a brand that our referral partner does not cover, you will be taken to a brand page on Canstar Blue.
Canstar Blue research finalised in March 2015, published in May 2015. 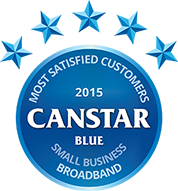 iiNet has achieved our Most Satisfied Customers award for 2015; outpacing competition from TPG, Optus (which both scored four stars overall), and Telstra with a three star rating. iiNet also completed the impressive feat of being the highest-rated ISP in all the criteria we surveyed. Check out how each of the brands fared below.

iiNet proves the best for business in our latest awards

Australia’s commercial broadband is currently in the middle of a major transition. The National Broadband Network is ushering in a new era of widespread, high-speed broadband connections for the vast majority of Australian homes and businesses, and this will have huge benefits for small business owners. Australia’s ISPs are beginning to offer NBN broadband plans (in certain locations) around the country, in addition to plans on the existing network.

But what does this new technology mean for your company, and are there advantages to changing your plan?

To know what kind of broadband plan is best for your business, it’s useful to understand the different broadband technologies that are currently in use; for a quick run-down, check out our article on broadband technology. Long story short: if your area isn’t currently connected to the NBN, you’ll only have existing HFC or ADSL networks to connect to, but don’t worry – NBNCo claims that one third of all Aussie homes and businesses will have the NBN at their fingertips by June 2016.

If your area has been connected to the NBN, then the news is good: you’ve got everything to gain by switching to an NBN plan, and the reason for this is the superior technology that the new network relies on. The NBN currently involves a mixture of network technologies to serve customers in different parts of Australia, but the main rollout consists of replacing ageing copper networks with fibre-optic cables; Fibre can transmit data hundreds of times faster than copper and, being made of glass fibre, requires no maintenance or significant power supply.

The result of this is broadband that is both faster and cheaper than what’s available on current networks – if you run a small business, the NBN is almost certainly going to be a superior proposition to your current connection.

An internet connection that’s fast, reliable and affordable has huge benefits for your business. For a start, it means easier maintenance of your online business, whether it’s through a website you maintain, or through advertising. Westpac’s 2013 ‘Westpac Ready for Business Report’ found that 53% of surveyed businesses had no website at all; the same report found that half of all consumers did online research before buying a product, and that of those businesses that had a transactional website, a whopping 91% reported an increase in revenue as a result. It’s pretty clear that an online presence for your business is incredibly useful for generating awareness and revenue – and fast internet lets you interact easily with your online holdings.

Furthermore, fast upload and download speeds mean faster transactions and faster collaboration over distance. Whether it’s having video conference calls with partners in different cities, access to cloud services such as file storage and databases, or easier remote working, there’s a huge number of possible improvements that you can make to your business with the addition of fast, reliable internet.

So you know that good internet service is a key component of success for your business, but this raises a new question: amongst the wide range of ADSL, cable and NBN plans being offered by different ISPs, how do you know you’re getting the best deal? That’s where we come in. At Canstar Blue, we regularly commission surveys into the opinions of everyday Aussies to measure satisfaction with a variety of products used every day. When it came to broadband internet service providers, we surveyed Aussie business owners regarding how satisfied they were with their ISP.

iiNet has achieved our Most Satisfied Customers award for 2015; outpacing competition from TPG, Optus (which both scored four stars overall), and Telstra with a three star rating. iiNet also completed the impressive feat of being the highest-rated ISP in all the criteria we surveyed. Check out how each of the brands fared below.

Nearly two thirds of the business owners we surveyed admitted they could probably get a better broadband deal if they shopped around, which makes a lot of sense. We’re becoming subsequently sensitive to price differences for this service as we grow increasingly reliant on it. The brand that offered the top-scoring value for money was iiNet, with a five-star rating. This brand was followed by four-star recipient TPG and three-star awardees Optus and Telstra.

It’s important for an ISP to provide fast and helpful technical support to bring businesses back to full operational capacity. iiNet customers were most satisfied with the service they received,  securing a five star rating for the quality of its after sales service. Behind them in the ratings were Optus on four stars, and TPG and Telstra on three stars.

This is an important one: how fast are your upload and download connections, and do they live up to what your ISP promised? In terms of data speed, iiNet was once again ahead, receiving five stars for its internet speeds. Optus and Telstra both scored four stars, whilst TPG rounded out the field with three.

Our single biggest driver of ISP customer satisfaction was how reliable their internet connection was, so it’s clearly important that your ISP pre-emptively deals with such network hiccups. iiNet’s reliability was top rated in our survey, netting them a five-star rating. Our other surveyed brands performed strongly also: all scoring four-star ratings for service reliability.

A monthly bill that’s clear and easy to interpret is an oft-overlooked aspect of any subscription service, but we all know how incomprehensible these can be at the worst of times. Fortunately, it seems Australia’s ISPs do to, for they scored strongly in this year’s ratings: iiNet topped the ratings with five stars, and the remainder scored four stars each.

As data requirements have increased exponentially over the past decade, ISPs the world over are beginning to abandon quantity-based plans in favour of charging for speed – but for now, Australian internet service is still very much the realm of data caps. Business owners were most satisfied with the data inclusions of iiNet’s plans, with the company taking out a five-star rating here. This brand was followed by TPG on four stars and Optus and Telstra with three.

If you’re looking for more information on Australia’s internet service and the NBN, check out our broadband buying guide and our NBN buying guide.