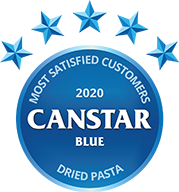 Vetta ‘pasta’ the test as best brand for dried pasta

Life is full of pasta-bilities! Whether we’re talking about spaghetti, penne or linguine, there’s a type of pasta out there for everyone, including the fussiest of eaters. Cheers, macaroni cheese! Naturally, our survey on the subject found that over half of respondents (55%) eat pasta at least once a week. This pantry staple comes in all shapes, sizes and flavours, which means we’re spoilt for choice when it comes to shopping for our next carb dish. Although, 46% of respondents said they usually stick to what they know and buy different pasta types from the same brand.

For our inaugural dried pasta review, we asked more than 1,700 consumers to rate the different packaged pastas they’ve purchased from a supermarket or grocer and consumed within the last three months. Survey respondents rated different brands on important factors like taste, texture, variety and value for money. Brands which met the minimum required survey sample size of 30 responses are included in the final results.

So, which brands were rated ‘tortellini awesome’ and which didn’t ‘pasta the test’? Our 2020 dried pasta review featured seven major brands, with Vetta the only one to achieve five stars for overall customer satisfaction. It also scored top marks for taste, texture and variety.

Here are the best dried pasta brands in Australia, as rated by consumers in Canstar Blue’s latest review:

Vetta edged out the competition as the only brand to score five stars for overall satisfaction, taste and texture. It also achieved top marks for variety, with four stars on value for money.

The other brands were split evenly in their overall satisfaction scores, with Remano (ALDI), Coles and Barilla rated four stars overall, while San Remo, Woolworths and Zafarelli finished on three. Notably, supermarket brands Remano (ALDI) and Coles dominated the value for money category, notching up the only five stars in this regard.

Vetta pasta is crafted and produced by Rinoldi Pasta, one of Australia’s oldest pasta manufacturers since 1878. The brand prides itself on producing premium pasta products according to traditional Italian pasta-making methods, using top-quality Australian durum wheat. Vetta offers a range of ‘healthy’ pasta products, as part of its SMART Fibre and SMART Protein lines. It also caters for little pasta lovers with its SMART Fibre Dinosaurs pasta! Here is a sample selection from Vetta:

A 500g pack of Vetta SMART pasta costs about $2 from most supermarkets. 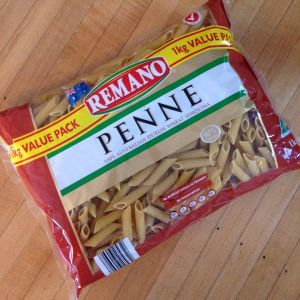 Remano is ALDI’s exclusive brand of pasta and pasta sauces. Remano pasta is claimed to be made from 100% Australian durum wheat and processed locally for the freshest taste. Here is a selection from the Remano range:

A 1kg value pack of Remano pasta costs about $3 from ALDI stores.

Coles own brand is the supermarket’s trademark line of essential household and pantry essentials. The private label has a wide variety of basic pasta products, including some organic options at affordable prices, compared to other big-name brands. Here is a selection from the range:

Barilla is claimed to be an Italian family-owned pasta producer with over 140 years of experience bringing quality pasta products to tables around the world. The brand is a leader in the pasta and ready-to-use sauces industries of continental Europe. Here in Australia, Barilla is a symbol of Italian know-how. It stocks five product lines including gluten-free and whole-grain options, of which there are more than 30 pasta shapes to choose from. Here are the Barilla pasta lines:

San Remo claims to be the number one dried pasta brand in Australia. Its products are made from 100% Australian durum wheat, to produce high-quality, premium pasta. The brand provides a wide assortment of pastas, with more than 100 products to choose from across different varieties like egg pasta, short and long pasta, gluten-free and fresh pasta. Here is a selection from San Remo:

Prices for San Remo pasta start from $2.50 for 500g in most supermarkets.

Woolworths home brand is a product line of everyday essentials stocked exclusively by the supermarket giant. Woolies’ own brand has a modest selection of pasta products at affordable prices, compared to other brands. Here are some products from the Woolies pasta range:

Synonymous with the cobalt blue packaging, Zafarelli was first sold in Australia in 1985 and has since expanded its product range to include more than 15 pasta shapes, including spaghetti, bucatini and instant lasagna sheets. Zafarelli’s pasta is produced using premium durum wheat. Here is a product selection from the Zafarelli range:

Prices for Zafarelli pasta start from $2 for 500g in most supermarkets.

Which dried pasta should I buy? 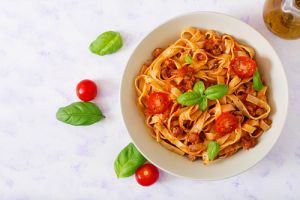 This will depend on what you’re dishing up. Pastas can be organised into different categories, including long and short pasta, tubes and stuffed pasta, soup pasta and other special shapes, of which there are different varieties (i.e. wheat, whole grain, gluten-free etc).

As a general rule, thin pastas are best served with light, wine-based sauce, while thicker pastas can be coupled with heavier tomato-based sauces, for example. Flat pastas usually go best with cream sauces, while round and tube pastas tend to work with just about anything. Hello macaroni!

Our review found these are Aussies’ favourite varieties of pasta:

Our survey also found the overwhelming majority of respondents (85%) favour traditional wheat pasta over wholemeal or gluten-free alternatives. A quick analysis of results also shows that taste is the biggest driver of satisfaction for consumers, followed by texture and value for money.

What is the best dried pasta?

Canstar Blue surveyed more than 3,000 Australian adults across a range of categories to measure and track customer satisfaction, via ISO 26362 accredited research panels managed by Qualtrics. The outcomes reported are the results from customers within the survey group who have purchased (from a supermarket or grocer) and consumed dried pasta in the last three months – in this case, 1,751 people.