ALDI’s Bramwells was rated best in Canstar Blue’s peanut butter review for the second year in a row, earning five stars for value for money and overall satisfaction.

On toast or straight out of the jar? Why not both! Peanut butter is a pantry staple in most households. According to our latest survey results, peanut butter is the most popular spread among Aussies (59%) edging out even the ol’ Vegemite. And it’s not hard to see why – aside from its deliciously gooey goodness – peanut butter is also generally rich in healthy fats, making it a good snack option to curb cravings! But ‘nut’ all peanut butters are created equal. Whether you’re on team smooth or crunchy, there’s a great variety of options to satisfy your taste buds.

To find out what’s best, Canstar Blue surveyed more than 900 Australian consumers to get their feedback on which popular brands were the peanut butter to their jelly. Respondents rated brands on range variety, taste, consistency, packaging, value for money and overall satisfaction. Those that received the minimum sample size (30 responses) are featured in our report.

So, which peanut butter are consumers going nuts for? It looks like Bramwells (ALDI) is still the peanut butter to Aussies’ jam, after it was rated best for value for money and overall satisfaction. 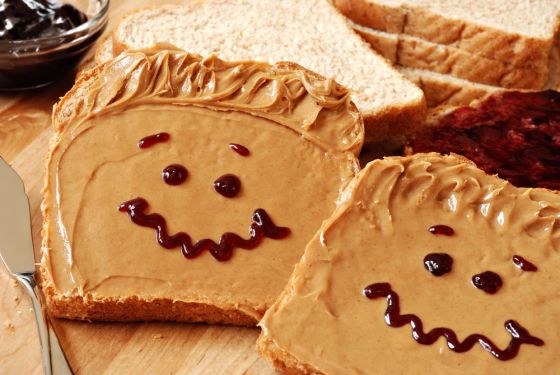 Here are the best peanut butter brands in Australia, as rated by consumers in Canstar Blue’s latest review:

ALDI’s Bramwells topped our peanut butter ratings once again, with five-star reviews for value for money and overall satisfaction. Sanitarium, Bega, Mayver’s and Bega Simply Nuts followed behind on four stars overall. Supermarkets Coles and Woolworths rounded up the scores on three stars each.

Bramwell’s is a generic brand sold exclusively in ALDI supermarkets, so diehard shoppers will be glad to know their favourite superstore is stocked in quality American-style peanut butter. The peanut content per Bramwells jar is higher than in most generic brands, with apparently less than half the sodium, and available for about $2.40 for 500g.

Sanitarium is claimed to be one of the first brands to make peanut butter in Australia circa 1898, before it quickly grew to become one of the country’s most popular brands even today. Whatever type of peanut spread you like; Sanitarium has you covered with a range of smooth and crunchy options and healthier alternatives with no added sugar or salt and made with 100% natural peanuts. A spread jar can cost $4.05 for 375g, depending on different retailers.

Bega’s journey may have started in dairy, but this Aussie-owned brand is now renowned for its wide range of nut spreads, cream cheese and Vegemite. Bega features a wide range of peanut butter options catering for every nutter’s taste buds. This includes smooth, crunchy, super crunchy, dark roast crunchy and dark roast smooth peanut butter. Plus, products are said to be free from nasties like artificial colours, flavours or preservatives. A jar of your favourite Bega peanut butter could cost anywhere between $3.20 for 200g and $16.50 for a 2kg bucket.

Mayver’s is another Aussie label on a mission to provide a healthier alternative to your run-of-the-mill nut butter. This brand is a staple among health-conscious shoppers because it offers different flavours of what’s described as ‘natural’ spreads, which could set you back at least $5 or more for 375g at the checkout. Mayver’s peanut butter options include smooth, scrunchy, organic, protein peanut butter and peanut coconut spread.

Bega Simply Nuts is the newest offshoot of the Bega peanut butter family – said to be made with 100% Aussie slow-roasted peanuts and low in salt. Bega Simply Nuts is also gluten and dairy-free and offers the staple smooth and crunchy spread, with a 325g jar likely to set you back about $5.

Coles offers several types of smooth and crunchy peanut butter, with prices usually starting from $1.80 for 375g. You can also snag a chunky 980g tub for $6.50, or the supermarket’s line of organic peanut butter for $5. These are claimed to have no artificial colours or flavours.

Woolworths’ homebrand peanut butter range includes the usual smooth and crunchy offering. These are claimed to contain no artificial colours, flavours or preservatives. You can find Woolworths peanut butter on the shelves for $4 for 500g.

Which peanut butter should I buy?

This is a debate that has divided Aussies for years. Which is best – smooth or crunchy? Well (drum roll please), the majority of respondents (47%) in our survey said they prefer crunchy peanut butter over a smooth spread.

But whatever your preference of texture, it’s important to look at each product label for the peanut content (some spreads can contain less than 50% peanuts) and nutritional information. Of course, the price will also be a factor to consider. But if our survey results are anything to go by, you don’t always get what you pay for, so it’s worth shopping around and trying new things.

*Prices sourced from respective retailers – accurate as of March 2021.

Which are the best peanut butter brands?

Canstar Blue surveyed 3,077 Australian adults across a range of categories to measure and track customer satisfaction, via ISO 26362 accredited research panels managed by Qualtrics. The outcomes reported are the results from customers within the survey group who have purchased and eaten a peanut spread from a supermarket or grocer (i.e. not homemade or purchased from a market) in the last three months – in this case, 935 people.