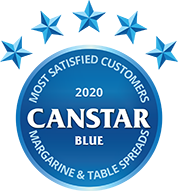 We’ve again surveyed over 1,500 Aussie consumers and asked about their recent purchase of margarine or table spread to see which brands make up the perfect blend of quality and price. Survey respondents rated their brand of choice on several factors, including taste, texture, value for money and packaging to help you make a better-informed purchase decision the next time you head down the fridge aisle in the supermarket.

From the 11 brands which received the minimum sample size of 3030 to be featured in this year’s results, ALDI Sunnyvale came out on top with the only five-star rating for overall satisfaction. It also received full marks for taste, value for money and packaging, as well as four stars for ease of spread and texture. 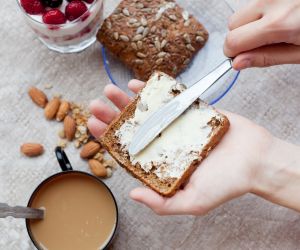 Here are the best brands for margarine & table spread in Australia, as rated by consumers in Canstar Blue’s 2020 review:

ALDI climbed to the top of the leaderboard, while last year’s winner Tablelands slid to fourth place on four stars, alongside the majority of the brands. Coles, Woolworths, Woolworths Essentials and ALDI Pure Vita followed behind on three stars overall.

Some noteworthy results include Nuttelex’s performance when it comes to ease of spreading and texture, where it jumped ahead of this year’s winner and received the only full marks in these two categories. The brand additionally got another five stars for taste, along with Olive Grove and ALDI Sunnyvale.

What actually is margarine?

A ‘true’ margarine, according to food standard regulators, contains a minimum of 80% fat (80g of fat per 100g of margarine). This being the case, there are very few ‘true’ margarines available in Australia today – most will fall under the category of oil-based, reduced fat, or another type of ‘spread’. Therefore, our customer ratings refer to margarines and table spreads. Ultimately, we’re talking about ‘that stuff’ you put on your toast and sandwiches, which isn’t butter.

What to consider when buying margarine or table spread

What are Aussies looking for in a margarine to add to their spread? Our survey shows table spread is a regular grocery staple for almost half of respondents (45%). A hearty portion of participants said they always buy the same brand (40%), while two in five admitted to trying multiple brands and types (44%).

Plus, one in three consumers (30%) usually pick the healthier option, such as the ‘light’ or ‘salt reduced’ alternative. One-fifth of respondents even said they read the nutritional information (17%). A handful of those surveyed revealed they were recommended by their health professional to switch from butter to margarine (7%).

ALDI has taken yet another winning slice in one of our many grocery reports – this time for margarine & table spread. The budget supermarket chain has an affordable alternative to some other brands, selling options like Sunnyvale Light Cholesterol in addition to its regular Sunnyvale Original. 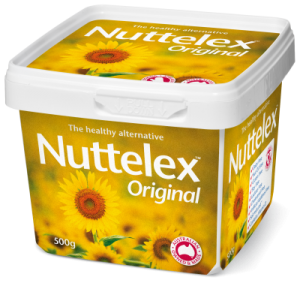 Looking for a margarine that’s dairy free, palm oil free or kosher? Or maybe you prefer something made with less fat or that ‘lowers cholesterol absorption’? Well, Nuttelex has created a variety of products to cater to different health concerns, food allergies and intolerances, and preferences. Its range includes: 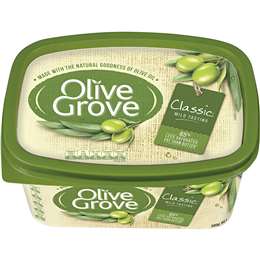 Claimed to contain at least 65% less saturated fat than butter, Olive Grove is said to be the first spread in Australian supermarkets to be made with olive oil. It joins brands like MeadowLea and Gold’n Canola as one of the names under the Goodman Fielder Group to produce spreads and oils, as well as other products. Options include: 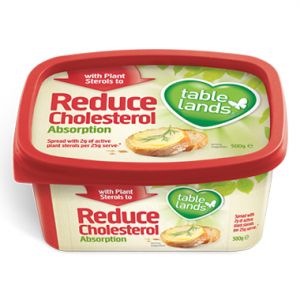 The Tablelands Health Smart Reduced Cholesterol spread costs $4 for a 500g tub. Alternative spreads, including the Tablelands Dairy-Free Buttery Spread, typically sell anywhere between $2 and $4 for the same amount. 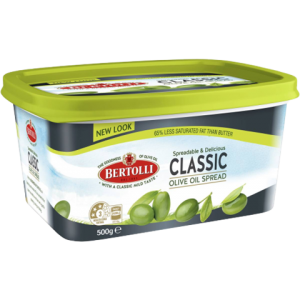 Known for its olive oil, Bertolli has extended its range to include spreads. Staying true to its Tuscan roots, the brand says its line of spreads is made with the finest ingredients, mixed with specially selected olive oil, resulting in a ‘flavour so vibrant you can almost smell the Italian deli in your own home’. Some Bertolli products include: 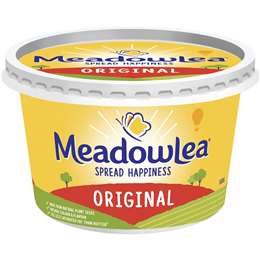 MeadowLea’s spreads are claimed to provide at least 65% less saturated fat than butter, and serve up a source of Omega 3 from the Australian grown canola seeds used in its products. The range is also said to contain no artificial colours or flavours. Products include:

Flora looks towards plant-based foods and its benefits in order to fulfil its mission to ‘help people look good, feel good and get more out of life’. Spreads like Flora Original are made with sunflower seed oil and supposedly contain 65% less saturated fat than butter (or 75% for some products like Flora Light). Flora’s range of margarine also said to not include any artificial colours of flavours. Options include:

Flora spreads usually cost between $2.99 and $4.50, although certain items from the brand can set you back $8. 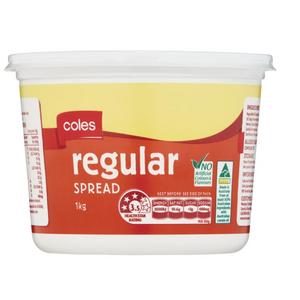 Coles has its own selection of supermarket-branded margarines, offering affordable alternatives to people looking for spreads designed to lower cholesterol or buy an olive oil or canola-based spread. Products include:

Prices range between $1.40 and $2 for most options, or $4 for the cholesterol-lowering varieties.

Woolworths similarly gives shoppers another affordable alternative with its own line of home brand spreads. Following many of the trends in the margarine market, the retailer’s range provides olive oil, cholesterol-lowering, as well as regular varieties. Options include: 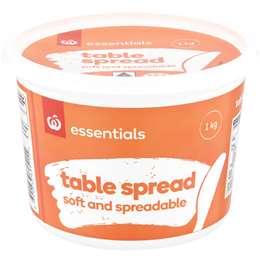 The supermarket currently sells the Woolworths Essentials Table Spread Soft and Spreadable in either a standard 500g or 1kg tub. These come at the affordable price of $1.40 or $1.60, depending on which size you get.

ALDI has created its own take on canola spread with its ALDI Pure Vita brand, with a spray version alternatively available for cooking or baking. It’s available in the standard 500g tub.

Which margarine should I buy?

What do you look for in a margarine when you’re planning on enjoying a delicious spread? Whether you’re baking, cooking or just spreading it on toast, margarine is the go-to healthier alternative when you’re craving that extra dip of butter. But don’t just take our word for it. One in three respondents to our survey (30%) said they usually pick the ‘healthier’ option, with 41% choosing margarine based on certain health benefits like lower in fat or cholesterol.

If you’re like one of the 23% of consumers who buy the cheapest or whichever brand is on special, our review shows you can’t really go wrong since most brands rated four stars for value for money. The only exception was ALDI Sunnyvale, which scored five stars, and Bertolli and Flora which ended on three. Many of the options are also typically priced around the $3 mark and come in 500g tubs.

Thinking of making the switch to margarine but worried it won’t live up to the same tastiness as butter? Then you might want to check out Nuttelex, which rated the best for taste, or other five-star achievers like ALDI Sunnyvale and Olive Grove. Whatever you choose, we hope you find our ratings to be a useful side dish during your next grocery shop.

What is the best margarine?

Canstar Blue surveyed more than 3,000 Australian adults across a range of categories to measure and track customer satisfaction, via ISO 26362 accredited research panels managed by Qualtrics. The outcomes reported are the results from customers within the survey group who have purchased and consumed margarine from a supermarket or grocer within the last three months – in this case, 1,584 people. A handful of nuts might just be what the doctor ordered, according to a new study.

Eating nuts regularly could prevent the development of heart failure and an irregular heartbeat.

A study conducted by scientists from Sweden, …